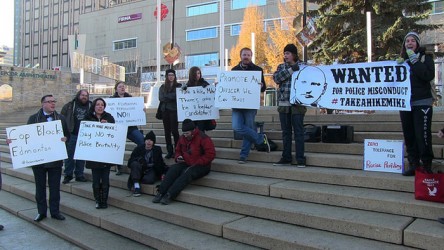 The promotion of Edmonton Police Service’s Const. Mike Wasylyshen to sergeant in early December sparked a series of protests downtown.

“When I heard that Mike Wasylyshen was being promoted to sergeant, I was shocked,” said Jeanne Longo, a First Nations activist with Idle No More. “I had seen the news and read the newspapers about what he had done and was surprised he was still a police officer, let alone getting a promotion.”

Wasylyshen was found guilty in 2012 and suspended for 120 hours without pay for using excessive force in an incident that occurred a decade earlier. In 2002, Wasylyshen tasered 16-year-old Randy Fryingpan eight times in 68 seconds, while the teen was passed out in the back of a suspected stolen car. As well, in 2005, while off-duty, Wasylyshen drunkenly assaulted a man on crutches on Whyte  Avenue. He also took a swing at a security guard. He later pleaded guilty to two counts of assault and was fined $500.

A rally to protest Wasylyshen’s promotion was held on Churchill Square on Dec. 20, co-organized by Idle No More, Anonymous Edmonton, and Occupy Edmonton. In addition to speeches, 25 or so protesters round danced and marched to EPS headquarters.

“It’s really a despicable situation, and to the police chief it is okay, it is justifiable,” said Duane Good Striker, citing Wasylyshen’s promotion as an example of systemic racism within the City of Edmonton. Wasylyshen is son of former Police Chief Bob Waylyshen.

“All EPS officers are held accountable for their conduct, and the matters involving this member have been dealt with previously under the Police Act and are on record as being resolved,” said the EPS in an email statement.

“These matters were also considered as part of the promotion process. The EPS promotion process involves an in-depth assessment, and includes a written exam, behavioural interview, as well a review by the management team/promotion board and EPS Professional Standards. This member, as well as numerous others, went through a fair and balanced process, demonstrated their competencies, and proved themselves ready for promotion.”

Speaking specifically about Wasylyshen, the EPS stated his scores in the recent promotional process were higher than any other of the over 100 candidates and that during his service with EPS Wasylyshen has otherwise had a positive work record, which was factored in when the promotional decision was being made. This includes his involvement in several successful, high-profile criminal investigations during the time he has been working in the VICE and undercover units. EPS said Wasylyshen had participated in one cultural training event and willingly submitted to 31 days of alcohol abuse training in 2006 through AADAC.

“I don’t think any amount of treatment for alcohol or anger management or abuse circles or counselling would help him because it’s when you want help for something, you go and get help because it’s what you want as opposed to being caught and forced into treatment,” said Longo.

Other protesters who were at the rally were similarly not optimistic about Wasylyshen’s transformation.

“I believe in reconciliation and I believe in second chances and I believe that none of us are perfect. We all make poor decisions and deserve an opportunity to learn from our mistakes,” said Blake R. with Cop Watch. “Now he is being promoted to the upper ranks of the police force and put in a position of leadership and influence, presumably because he will be a role model for other officers. It is true that these events occurred almost 10 years ago and I believe that people can change. But for EPS I have a few questions . . . and I fear the answers to all these questions are the same: The answer is ‘because Mike is the son of a former police chief’ and that is called ‘corruption’.”

Wasylyshen’s promotion has garnered much attention. On Dec. 8, protesters marched from Churchill Square to EPS Headquarters. On Dec.12, a healing circle took place where members of the Aboriginal community met with EPS. Wasylyshen was in attendance. Idle No More organizer Taz Bouchier says she invited Wasylyshen to the Dec. 20 protest to answer to the concerns against him publicly, but he declined.

Photo Caption: People gathered on Churchill Square to protest the promotion of police officer Mike Wasylyshen, who was suspended over a violent incident involving an Aboriginal youth more than a decade earlier.