Protestors take to the streets over anti-terrorist bill 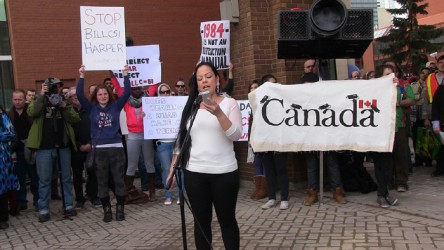 The outcry against federal legislation that could label as terrorists those who protest government action is gathering strength.

“This is a clear demonstration that the government fears the voice of reason … so much so that if you open your mouth and act in the betterment of rights of nature and basic human rights you can and will be labeled a security threat,” said Crystal Lameman, of the Beaver Lake Cree Nation. Lameman was among a group of people who addressed a crowd that took to the sidewalks at City Hall in Edmonton on March 14. It was one of about 40 demonstrations nation-wide protesting Bill C-51.

Lameman is no stranger to protests. She has guided demonstrations on the steps of the provincial Legislature as well as Edmonton’s Churchill Square, fighting against omnibus bills C-39 and C-45, as well as resource development in her traditional territory. However, Bill C-51, the Anti-terrorism Act, could curb similar action in the future and stifle such movements as Idle No More, which sprouted as a direct result of Indigenous discomfort over federal legislation that steamrolled over environmental protection and Indian reserve land rights.

“Constitutional experts are raising very serious issues about this bill,” said NDP MP Linda Duncan, who attended the Edmonton rally. She said the bill was “going far beyond” terrorists.  “It’s going to put anybody who stands up like this in a demonstration at risk of being designated a terrorist and at risk of being investigated.”

Lameman rallied people to “get up, stand up. If not for you for the generations that come, who will be left to face the trail of destruction (Prime Minister Stephen) Harper and his followers have left.”

According to Danika Littlechild, a lawyer from the Ermineskin Cree Nation and recently appointed as vice-president of the Canadian Commission for UNESCO, Bill C-51 is  “a sweeping right measures” that allows suspects to be detained on less evidence and allows police to actively interfere with suspects’ travel plans and finances. The bill provides for little oversight of and accountability from Canada’s national security agencies.

“What makes this legislation a little bit different is that it first lowers the threshold for arrests and detentions,” Littlechild said, speaking at a forum at the University of Alberta in early March on how oil companies impact the rights and responsibilities of Indigenous Peoples. She added that suspects could be detained on the possibility they may carry out terrorist activities.

“One of the key issues from my perspective is that there has historically been, and in contemporary times as well, been a significant issue around the criminalization of Indigenous peoples’ rights,” she said.

There was a time when First Nations people could not leave the reserve without approval from the Indian agent, and language and ceremony could not be practised. Legislation created Indian residential schools.

For a contemporary example, Littlechild pointed to the case of child advocate Cindy Blackstock, executive director of the First Nations Child and Family Caring Society of Canada. Blackstock’s organization teamed up with the Assembly of First Nations to start action against the federal government in 2007 for not providing First Nations children with the same level of services received by other Canadian children. In 2011 it came to light that Aboriginal Affairs and Northern Development Canada had been monitoring Blackstock.  Through the Privacy Information Act, Blackstock accessed a file the government had on her, which contained closed to 400 pieces of documentation, including emails and notes, gathered in an 18-month period beginning in December 2009.

“We are extremely concerned about the room for the voice of dissent in Canada. This is not just about Indigenous people. It is truly about all Canadians,” said Littlechild.

She pointed to an  RCMP report obtained by Greenpeace. The report, dated Jan. 24, 2014, concluded, “There is a growing, highly organized and well-financed anti-Canada petroleum movement that consists of peaceful activists, militants and violent extremists who are opposed to society’s reliance on fossil fuels.”

In a presentation to the House of Commons Standing Committee on Public Safety and National Security on March 12, AFN National Chief Perry Bellegarde asked for the government to withdraw the bill and consult with First Nations.

“We believe in safety and security but the federal government’s rush to ram this legislation through is undemocratic and it violates our individual and collective rights. First Nations will vigorously oppose any legislation that does not respect and protect our rights,” said Bellegarde.