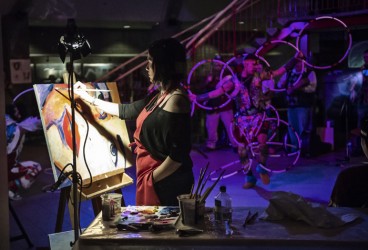 The sixth annual Rubaboo Festival took place in early February. This year’s event saw a number of changes, and more are on the horizon.

Rubaboo is a Métis-Michif word (mixture of French and Indigenous) for a stew made on the trap line. The festival, organized by Alberta Aboriginal Arts, is multi-disciplinary, showcasing theatre, music, dance, art, food, family, and youth events, as well as workshops. As the only major Aboriginal arts festival in Alberta, it gives artists a forum and platform for art, growth as artists, to contribute their work to the community, and to bring audiences of all backgrounds together to enjoy the vast artistic expressions that exist in Indigenous culture.

The major change this year involved the date of the festival. Originally held in June in honour of National Aboriginal Day and Month, moving the festival to February will help Rubaboo continue to gain momentum, as it coincides with other Aboriginal touring productions and events such as Talking Stick, Magnetic North, and High Performance Rodeo, says Christine Sokaymoh Frederick, Alberta Aboriginal Arts’ artistic director and co-founder.

“In June of 2013 we held the Northwestern Touring Presenters’ Gathering at the Rubaboo festival. This was a special initiative to bring Aboriginal and non-Aboriginal presenters from across Canada together to discuss a potential network for presenting Aboriginal works in Canada. In direct response to the discussions, we transitioned Rubaboo from June to winter time,” she said.

According to Frederick, the new date proved advantageous as audience numbers doubled. Rubaboo will remain a winter festival, although the specific dates will shift according to the dates of similar festivals in Canada.

“We have had international talent in past years, but this year we hosted local talent, and those from the surrounding regions, as well as from across Canada,” said Frederick.

The final event of Rubaboo was a fundraiser, with a silent auction and mixer social. Many of the pieces for the auction were donated by artists and Edmonton Mayor Don Iveson attended and spoke on the importance of supporting the work of Aboriginal people.

More changes are already being considered for next year’s Rubaboo Festival.

“We want to build on the good relationships we started this year as well as ones we developed with the IndigeNetwork to bring in more touring shows and international connections,” said Frederick.

Photo caption: Lana Whiskeyjack paints while Lakota Tootoosis dances during the second Rubaboo Fusion Night on Feb 5. Two artists were invited to paint live in front of audiences and rift off of other performing artists.