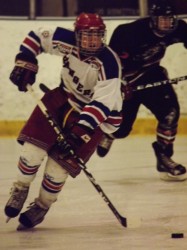 At least two Alberta teenagers will be appearing in a new hockey television series.

Isaih Cardinal and Silas Makokis will be among the 20 Aboriginal players featured in Hit the Ice, a series that will primarily be featured this summer in Ottawa and in nearby Gatineau, Que.
The series, which will consists of  13 half-hour episodes, will be broadcast on the Aboriginal Peoples Television Network starting in January of 2013.

The show's participants, who are all expected to be between 16-18, will be put through an intense two-week camp led by former National Hockey League player and coach John Chabot, who is Algonquin.

The camp is expected to be heavily scouted by representatives of various junior hockey clubs.

"We are trying to get as many kids as possible some junior spots," said Jason Brennan, the producer/director of Hit the Ice.
The show's representatives attended the National Aboriginal Hockey Championships staged in Saskatoon to seek prospective players for the series. After scouting the available talent, 15 players from across the country were offered spots on the series, which will be filmed from July 22 through Aug. 5.

Since the list of those who will be granted spots on the series via the virtual tryouts won't be known until some point after the application deadline, there is a chance more Alberta players will also make the cut.

Cardinal and Makokis were members of the Alberta team that captured the silver medal in the boys division at this year's NAHC.
Cardinal, a 16-year-old Cree, is from the Saddle Lake First Nation. He spent the past season playing defence with the Bonnyville Panthers, a Midget AA team.
The 6-foot-4, 185-pounder said he was pleased when he was told he would be invited to appear on Hit the Ice.

"I am pretty excited to go," he said. "I haven't had another offer like this before. I'm hoping something really good comes from it."
Chabot, who played in 541 NHL games, told Cardinal at the NAHC that he believes the blueliner is capable of playing in the Quebec Major Junior Hockey League, one of three circuits in the Canadian Hockey League.

The CHL, which features major junior players (the highest level of junior hockey in Canada), also includes the Western Hockey League and the Ontario Hockey League.

"Nobody had ever told me that before," Cardinal said of the suggestion that he has the potential to play in the CHL.

Like Cardinal, Makokis is also a 16-year-old Cree from Saddle Lake First Nation. He played Midget AAA hockey this past season with the Fort Saskatchewan Rangers.

Makokis, a defenceman, is anxiously anticipating taking part on Hit the Ice.

"It's an opportunity to showcase my skills as a hockey player and to meet other great hockey players," he said.

And he's hoping his appearance on the series will help lead to bigger and better things.

"It is my passion and dream to one day soon play professional hockey," he said. "What I am hoping to get from this  experience is to showcase the skills that I have and to get my name out in the hockey world."

Photo caption: Fort Saskatchewan Rangers defenceman Silas Makokis will be one of 20 hockey players featured on the new TV series Hit the Ice.