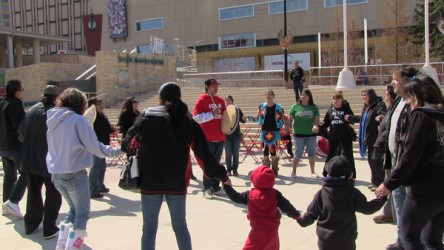 Casey Julian Thunderspirit has learned that strength is not always found in numbers. The 15-year-old organized a march and rally to celebrate Earth Day and the Idle No More movement in downtown Edmonton on April 22.

Elder Taz Bouchier, a frequent speaker at Idle No More events, says she is proud of Thunderspirit and his effort because of the leadership he is showing at such a young age.

“It doesn’t matter the numbers that show up. It’s the heart and intention that you put into this. Even though the physical people are not here, the grandmothers and grandfathers on the other side honour your intention and they will take care of things,” said Bouchier.

The event began with a march from the Stadium LRT station to Churchill Square, where the rally portion took place. Although the event did not attract a large crowd, Thunderspirit maintained a positive attitude.

“Thank you to everyone who came out. Not very many came out but it was worth it. It was fun and I am glad that we’re all here,” said a laughing Thunderspirit in a short speech.

“Do not ever feel ashamed for doing what you know is the right thing to do,” Bouchier said. “If people don’t want to participate and help with that, you continue walking on. That’s what a leader does. One day you’ll look back at this and say ‘I learned so much from this experience and it taught me how to be a better leader.’”

In addition to organizing the event, Thunderspirit, who is with the group Young Cree, drummed and sang to accompany Kelsey Wolver as she performed a hoop dance, as well as a round dance.

Drumming has been a part of Thunderspirit’s entire life, while he more recently started singing and dancing. In fact, Thunderspirit got involved with Idle No More at the encouragement of others who recognized his talents.

“People wanted me to be a part of it, and I read about it and had seen other events and thought I would go sing and dance,” said Thunderspirit.

The environment, particularly the effects of pipelines on Aboriginal land, was a main reason why Thunderspirit decided to combine Idle No More with Earth Day.

“I was originally going to have the event on the Sunday, but thought Earth Day was better, even though it would have been easier for people to attend because people were not at work,” he said.

Undeterred by the low attendance, Thunderspirit says he was “not discouraged. I was happy with the numbers.” He is currently planning more events such as flash mobs and “maybe another march and rally if I can get enough people involved.”

April 22 was called as a day of action in Alberta by Idle No More and Defenders of the Land for Indigenous and non-Indigenous people to join together for non-violent direct actions. Along with Keepers of the Athabasca, the groups organized an event at Blue Quills College with speakers discussing environmental issues such as the impacts of industry activity on traditional lands, water, and the importance of the spiritual connectedness to the land.