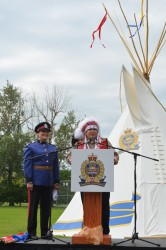 “This is something that we have been working on for a long time in a vision that has come to fruition, and I am very pleased and proud of what we are going to accomplish in the future,” said Constable Lisa Wolfe, who serves with EPS’s Aboriginal Community Liaison Committee.

Developed in consultation with the EPS Chief’s ABCLC, the first-ever EPS tipi was built with the assistance of the Edmonton Police Foundation to demonstrate the EPS’ respect and commitment to the Aboriginal community. The EPS Aboriginal Policing Strategy is currently under development through the newly-created EPS Aboriginal Relations Unit. The tipi will be visible at various community and cultural events and police functions.

Papaschase First Nation Chief Calvin Bruneau says the tipi is a clear indication of the deep Aboriginal roots of Edmonton.

“We’ve become more visible out in the community and as a result we’re making strides within government, within the police force, within different sectors of society. There’s been different initiatives being developed over the years trying to encourage the participation of the Aboriginal community and that’s a good step,” said Bruneau, who spoke at the dedication ceremony, which was held on National Aboriginal Day.

However, he also emphasized that racism is an issue that needs to be dealt with. “This is a good ceremony, but it cannot be a token ceremony. We have to have not only mutual respect and understanding of one another, but we also have to have building of relationships, working together to make a positive community for the city.”

Knecht says the strategy will take a three-prong approach: to foster positive relations with the growing urban Aboriginal population; to recruit both police and civilian employees to the EPS; and, to increase the cultural sensitivity and awareness towards the Aboriginal community within the EPS.

“With any relationship you have your struggles, but with good communication and a real passion to want to make it work, we have persevered,” said Sherry Fowler, with the Bent Arrow Traditional Healing Society and who is part of the Aboriginal Community Liaison Committee.

Ward 12 City Councillor Amarjeet Sohi called the tipi “a true symbol of meaningful partnership between the Edmonton Police Service and the Aboriginal community.”

The Tipi was handcrafted by Wolfchild Tipis and Tents who also handpainted it with the EPS crest. Later this year youth from Edmonton’s Aboriginal community will add their own designs and colours to the blanks canvas areas.