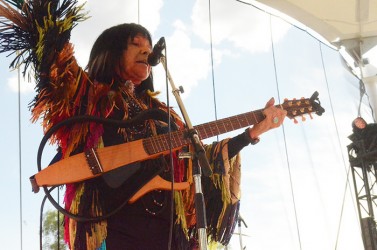 Buffy Sainte-Marie was named an honourary witness by the Truth and Reconciliation Commission, which wrapped up in early June in Ottawa. However, speaking truths about social issues that are ignored or covered up is nothing new to the legendary singer/songwriter.

“It’s really a two-way thing,” she said of being named an honourary witness. “One, I am very much honoured to have my own work in this area acknowledged because 50 years ago I was already talking about genocide and there weren’t many people who would talk about the Native American genocide. On the other hand I am really grateful there are other people who have taken on the issue and hopefully are making the facts clear to those Canadians who have never had the chance to know what happened.”

Now 74 and still actively recording and touring as part of a career which spans five decades, Sainte-Marie continues her truth-telling on her new album Power in the Blood, released earlier this year. It contains a number of songs she often performs live, but are not readily available elsewhere, such as a revamped version of “It’s My Way” off one of her first albums in the ‘60s, to a couple of songs that were originally recorded during the blacklist era of the ‘70s and subsequently repressed (“Not the Loving Kind” and “Generation”). She was in Alberta in late July performing at the Calgary Folk Festival and Edmonton’s Interstellar Rodeo.

Sainte-Marie views exposing the truth about Native American history to be an important part of her career, both in front of and away from the microphone. She discusses these issues at every concert and on her albums, and she teaches at several different universities in the area of Native Studies.

“As a songwriter and as a creative person, when I deal with difficult historical issues that have been covered up, I don’t see it as a combative stance, I see it as a gift that I am giving to everybody, from college teachers who have been mis-educated and who want to know, to average citizens, who are just a little bit curious or maybe want to make great changes in the way we treat each other as we move forward into the future.”

Said Sainte-Marie, “The good news about the bad news is that more people can see the issue clearly, and that really is good news.”