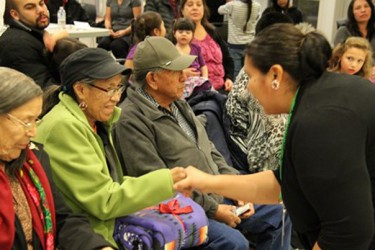 Key to the inroads Calgary’s United Way’s Aboriginal Youth and Education Strategy has made in increasing high school completion rates over the past 10 years has been its ever-evolving comprehensive approach. The program works with the education sector, including the three school boards of Calgary Board of Education, the Calgary Catholic School District, and Rocky View Schools, post-secondary institutions, agencies and corporations.

It is one of the few Canadian United Ways that has undertaken such a long-term strategy to improve education for Aboriginal youth through a variety of “demonstration programs” that build upon prior learnings. Typically programs are created for a specific time frame, usually four to five years as demonstration projects.

Daisy McGee, strategy lead, who has worked with AYES for the past three years, says learnings are gleaned from demonstration projects to build new programs with greater sustainability in the future. The programs are dynamic and fluid, adaptable to change. The Aboriginal Pride and the Circle of Supports programs are two programs that McGee says have been highlights for her.

In conjunction with the CBE and Catholic School Boards, the aim of the Pride program was to implement more culture for Aboriginal students. People acted as connectors, creating individual customized support.

“Connectors stay with individual students and follow them maintaining a relationship,” said McGee. At Father Lacombe High School, the percentage of Aboriginal students graduating increased from 45 per cent in the first year to 77 per cent in the last year of the program.

Similar to the Pride program, the Circle of Supports, a four to five year demonstration project initiated in 2012, is following Grades 8 and 9 Aboriginal students through to graduation aiming to provide the youth with the supports and services needed along the way to succeed.  As of June 30, 2014, there were 32 participants in the program.

Circle of Supports, which worked in partnership with the Urban Society for Aboriginal Youth and Encore, a CBE program, connected with Aboriginal youth through conferences, events, and contacts on the street to get youth back into school. Eighty-three Aboriginal youth involved with Encore returned to school.

“Laying out the strategy, creating programs, and providing supports have contributed to the overall success of the initiative,” said McGee.

While there is little quantitative data to support the AYES program, there are success stories. McGee cites the success of United Way youth ambassador, Chantel Large, who has completed her Bachelor of Social Work and is now working on her Master’s in Social Work at the University of Calgary.

AYES is in a transitional phase.

“We are talking with agencies to figure out the next steps,” said McGee. Going forward, programs will likely focus on a greater understanding of history, trauma and its origins to determine why students are having a hard time getting in the door.

“The change in focus may be not so school-based, but focused on healing to better understand the complex issues youth are facing is to better support them,” she said. This involves an examination of all social barriers: education, poverty and housing.