Water is sacred it is not a commodity for sale 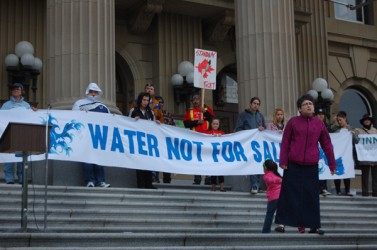 “Water is not for sale.” “Water is sacred.” Those are the words that filled a rain-dampened rally that saw demonstrators make their way from Canada Place in downtown Edmonton to the Alberta Legislature on May 24.

“Our treaty says we have a right to water. We have to protect that,” said Shannon Houle, addressing about 150 people on the steps of the Legislature.

Houle, from Saddle Lake Cree Nation and a co-founder of the Idle No More movement, raised her voice along with such organizations as Keepers of the Athabasca, Public Interest Alberta and Council of Canadians to warn Albertans about what the groups view as the provincial government’s plans to push through legislation that would see water become a commodity and sold through licences.

This spring Alberta Environment and Sustainable Resource Development wrapped up what was touted as “water conversations.” The consultation has come under fire from a number of groups, who claim not enough people were reached and not the right people were spoken to.

“(The government is) going to say, ‘We talked to Albertans, we listened to Albertans.’ But we have to say that conversation has to go much more deeply and especially in regards to First Nations. Consultation with all Albertans … has been pathetic.
With First Nations it has been nonexistent,” said Scott Harris with the Council of Canadians.

The government held 30 consultation sessions, 10 of which were specifically for Aboriginal people. However, demonstrators were not impressed with the sessions that were slated for First Nations and Métis, nor were they pleased with the way comments from Aboriginal people were dealt with when they were made at open sessions.

“When (Environment Minister) Diana McQueen sent me a message, they said they consulted. Who did they consult? I don’t remember them coming to my nation or any other nations. And any First Nations or Indigenous people who did speak up at these meetings, there was nothing put on record that we spoke. There was no consideration of First Nations, or whatever terminology or labels they want to give us,” said Houle.

Of primary concern is what is viewed as the government’s push to sell water, something they have been talking about for years, says Bill Moore-Kilgannon of Public Interest Alberta.

“What that’s going to mean is that the corporations, with their deep, deep pockets are going to be coming in and they’re going to be buying up those water licences,” he said. “Under international trade rules, once you commodify something, and you have international corporations controlling it, they will use the North American Free Trade Agreement  and (the World Trade Organization) to make sure they maintain control of those water licences.”

Moore-Kilgannon says Alberta will find itself in the situation Australia is now facing where that government is spending billions of dollars to buy pack water licences from corporations.
Melina Massimo-Laboucan, of the Lubicon First Nation and a climate energy campaigner for Greenpeace Canada, says her communitydoes not have running water despite the fact that billions of dollars of resource revenue from oil and gas comes from her traditional territory.

She says despite a lack of underground water mapping, the province still hands out water licences to industry “as if (water) is an endless supply that will never run out.”

“That’s why we are here today,” said Massimo-Laboucan, “calling out the Alberta government to become truly accountable to the people they claim to represent and that we can no longer make deals… in favour of industry and not in favour of people they are sworn to protect and that is why we come here today and say, our water is not for sale.”

McQueen disputes the claim that it is her government’s intention to sell water. In a Facebook posting, she wrote, “I have been very clear that water in Alberta is not for sale and will not be for sale to other jurisdictions – never has been and never will be.”

However she has said that municipalities may sell water to residents and to industry or businesses.

Métis Elder Diane Ludwig says her grandfather warned her 60 years ago that she would be paying for water.

“They’ve taken our children, they’ve taken our land. They put our Elders in places they shouldn’t be in. And now they are taking the most sacred thing we have: our water,” she said. “We have to start fighting for what we believe in.”