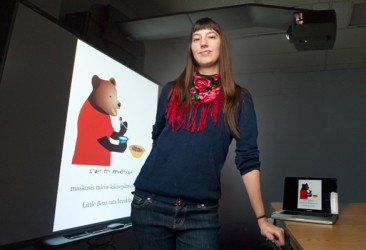 A class assignment in the University of Alberta’s Native Studies program has evolved into the latest online teaching tool for children learning the Cree language. Little Bear’s Day and The Seasons are the first in what Caylie Gnyra hopes will become a large collection of e-books available free online for classroom use from kindergarten to Grade Six.

Gnyra, 29, is the U of A student behind the creation of Little Cree Books. Her passion for sharing and preserving the Cree language and culture has grown out of her educational pursuits over the past number of years. Her own background is not Aboriginal, but her studies and field work have given her a better understanding of the value of Native culture. “I can definitely learn from things that other cultures have to teach us,” she said. “I believe we have a lot to learn and can benefit from listening.”

When Gnyra was working toward her English degree at The King’s University in Edmonton, she began to take a serious interest in Aboriginal relations. She spent time working with various Aboriginal communities and organizations through a provincial leadership program, the Native Cultural Arts Museum in northern Alberta and with Indigenous youth in South America.
She says her experiences have helped her gain some understanding of the feelings and energy out there. “I realized that not a lot of people know about Canada’s Aboriginal history, and people aren’t doing a lot because they don’t know where to start…a professor at King’s suggested I take Native Studies at the U of A.”

In 2007, Gnyra enrolled in the two-year after-degree program, then extended her studies by an additional year to take advantage of a student internship at the Smithsonian’s National Museum of the American Indian in Washington, D.C. She has since completed a museum studies degree as well.

The Native Studies program brought Gnyra into the orbit of passionate Cree-language instructor Dorothy Thunder, whose classes focus on reading and writing. Inspired by a simple sentence included in a translation exercise, Gnyra expanded on it when assigned to write and illustrate a children’s book using language learned in class. “What Colour Are Your Little Ducks?/ Tân’sesinâkosiwak kisîsîpimisiwâwak” became Gnyra’s first electronic book. It takes young readers through the spectrum of colour in Plains Cree text written in syllabics as well as the letters we recognize in English (Standard Roman Orthography), and the English translations.  The story didn’t go online because it was done for Thunder’s class and contained artwork from the Internet.

“There are two books online (www.littlecreebooks.com) and they’re both pretty dear to my heart,” said Gnyra.

Little Bear’s Day introduces kindergarten children to vocabulary that reflects 15-20 things they do throughout the day. The little bear cub wakes up, gives thanks, eats breakfast and moves through a normal day. The Seasons is about playful kittens dressing to play outside in various kinds of weather.

Gnyra’s goal was to create low-cost e-books with age-appropriate material that would help them learn to read and write in Cree. She wanted the books to be viewable on SMART boards, e-readers, smart phones or tablets, and to be printable for classroom or individual use. Little Cree Books is already moving toward that goal, following Alberta curriculum guidelines.

The original intention was to develop the books for Plains Cree, but to get them translated into other Algonquian languages, she said. “If you can develop resources in Cree and do a quick translation, you can share the same files and provide audio and pass it on from there.”

Now, Gnyra has been encouraged to produce more books for early readers before moving on to the higher grades. “Response has been great. People are really supportive,” she said.

In a testimonial on the website, David Malthouse, vice-principal of Sunchild First Nation School in Rocky Mountain House, wrote, “It is very difficult to find good basic Cree language books directed towards young elementary students. We have downloaded the two Cree e-books for our students at Sunchild First Nation School. The books will be laminated, coil-bound and presented to our kindergarten class as well as our K-6 Cree teacher.”

“The books are built on volunteerism and collaboration, and I want other people to be involved as artists,” said Gnyra. “It shows you don’t have to be fluent to contribute to language and cultural value. Part of the healing that has to happen now is for non-Aboriginal people to realize the culture is good and valuable and to do our part to recognize its worth.”

She quoted a saying she read a few years ago, with an Elder saying, “We learned your language and did our homework. It’s time for you to do yours.”

“I really feel a connection to that,” she said.