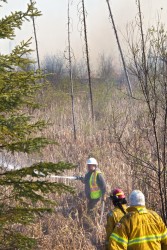 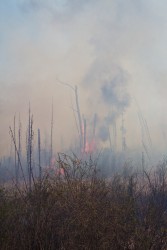 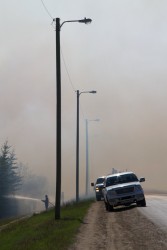 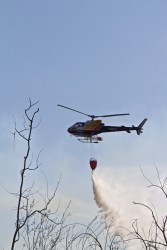 Wildfires that began surging through the Treaty 8 traditional territory in mid-May have left over 9,700 people displaced, with easily one-third of those being First Nations or Métis.

The first mandatory evacuation orders were issued on May 15. Although the town of Slave Lake with its 7,000 population-base was the largest centre to be impacted, many First Nations’ communities surrounding the town and north were also evacuated, whether voluntary or mandatory.

Almost 10 days after the first evacuation orders were issued, the government announced a phased re-entry plan. The four-phase plan, which included input from the Sawridge First Nation and endorsed by the Town of Slave Lake, the Municipal District of Lesser Slave River and the province, is sketchy on details as what it means for Treaty 8 members, said Joseph Jobin, chief operating office with Treaty 8 First Nation.

“We haven’t been told anything. I don’t think we’ll know much until our meeting with (Aboriginal and Northern Affairs Canada),” said Jobin. That meeting took place at the end of May, after press deadline.

First Nations that were evacuated over the course of the wildfires were  Loon River, Woodland Cree (Marten Lake and Cadotte Lake), Whitefish Lake, Fort MacKay, Sawridge, Bigstone Cree, Driftpile, Lubicon Lake (Little Buffalo) and Swan River (Assineau River). The Gift Lake Métis Settlement was also evacuated.
|
“We’re monitoring the situation here,” said Victor Horseman, Treaty 8 Grand Chief liaison. A situation room has been established at the sub-office on the west end of Edmonton. “We’ve got the first emergency done. Now we have to look after the next few weeks.”

Horseman said he’s still trying to get a handle on numbers, but believes there are at least 2,300 members displaced. Many have sought refuge in Edmonton, staying at the Expo Centre, set up as an evacuation reception hall, or with friends and relatives. He has heard of members taking temporary refuge in Valleyview, Peace River, Athabasca, Grande Prairie, Westlock, Wabasca and High Prairie.

Horseman has confirmation from the Athabasca Tribal Council on the losses of hunting cabins to fire as well as heavy smoke damage to many houses on all the First Nations.

“What I’ve been hearing is the Sawridge Nation had the biggest impact for structural damage,” said Horseman.
Lubicon Lake First Nation members who reside in Little Buffalo evacuated to hotels in Peace River, said Garrett Tomlinson, spokesman for Chief Bernard Ominayak.
“It’s just smoke. The community is not in danger of burning. But the community was entirely evacuated (on May 15). It was a voluntary evacuation recommended by chief and council,” said Tomlinson. Since that time, it became mandatory.

Only essential personnel remained behind at Little Buffalo, with a dozen people working heavy equipment along the fire line.

“We are so grateful for the young men and women in this community who are willing to step up and take care of their community. Even the councilors are out on the heavy equipment cutting fire lines,” said Tomlinson. “You wouldn’t see that in the big city.”|

On May 24, the government reported 43 wildfires in the province with four out of control. Since the start of April, Alberta has recorded approximately 500 wildfires, which have burned more than 300,000 hectares.

As of May 24, the state of emergency remained in place but there was no longer a threat of wildfires re-starting in Slave Lake, Sawridge or the MD of Lesser Slave River. However a government bulletin did say the fire “can still be extremely active and unpredictable.”

Power has been fully restored to that specific area and natural gas and phone service to the area not impacted by the fire. Water has also been restored but a boil water advisory is in effect.

Phase 2 of the plan calls for the return to the region of all essential workers and their families. Phase 3 is re-establishing regional key business components. Phase 4 is the general re-entry of evacuees. No time line was offered in the re-entry plan.

As of May 22, province-wide, there were more than 2,000 personnel fighting fires, including nearly 500 firefighters from British Columbia and Ontario. The province has also deployed approximately 140 helicopters, 32 air tankers and scores of heavy ground-based equipment.

The wildfires took their only casualty on May 21. A helicopter scooping water from the Lesser Slave Lake went down killing the pilot.

These photos are provided by Denis Carnochan and reveal the scope of the work involved in fighting the many wildfires raging out of control in northern Alberta throughout May.

This fire is in Bigstone Cree Nation Reserve B and D just west of Wabasca, Alberta. The photos were taken on May 15.  Area residents were evacuated, but for only a short period of time.

On May 15th much of the town of Slave Lake, Alberta 60 kms southwest of where these phtos were taken was evacuated as gusting winds fed the raging wildfires. The winds pushed the wildfires into the town causing tremendous devastation. More than 40% of the homes and businesses in the town of 7,000 people have been consumed by the fires.

Sweetgrass will post more information as it becomes available.