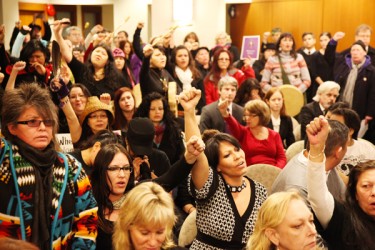 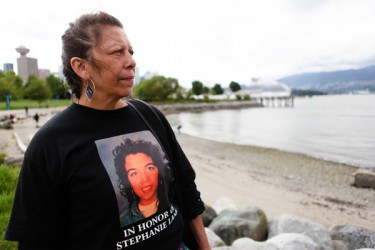 The release of Wally Oppal’s scathing final report from B.C.’s missing women inquiry was met with sobbing, drumming, and anger on Dec. 17 as families and friends began the next stage of grieving for their lost ones, and rights groups rallied around the call for a Canada-wide investigation.

The commissioner concluded more than a year of testimony, reports and controversy, ruling that “systemic bias” by RCMP and Vancouver police had repeatedly “forsaken” dozens of missing Native women.

But with more than 600 missing and murdered Native women documented countrywide, (some speculate that number might be as high as 2,000) rights groups are pressing on with demands for a national inquiry.

“This inquiry dealt only with the failure of police around Vancouver to investigate and prosecute William Pickton in a timely way,” said Michèle Audette, president of the Native Women’s Association of Canada. “The Oppal inquiry did not deal with all of the murders and disappearances of Aboriginal women and girls even in the province of British Columbia, and the murders and disappearances have continued.

“The Oppal inquiry did not focus specifically on Aboriginal women and girls, and the multiple factors which cause the epidemic of extreme violence against them. Because of this limitation, we need a national public inquiry that is focused on the murders and disappearances of Aboriginal women and girls in every part of Canada, which will deal with the systemic patterns and causes of the violence.”

Oppal’s report also concluded that police could have caught serial killer Robert “Willy” Pickton five years before his arrest, if charges had not been mysteriously dropped in the pig farmer’s attempted murder of a sex trade worker known as “Ms. Anderson” in 1997. He later confessed to killing 49 women, at least 19 of whom disappeared after 1997.

That was also the year that Stephanie Lane, a 20-year-old Métis woman, disappeared, only to have her DNA discovered on Pickton’s farm after his arrest. Lane’s mother, Michele Pineault, was 38 at the time, just a year older than her daughter would have been if she were alive today.

“There is no healing,” Pineault told Windspeaker. “We’re broken families.

“I’ve lived through a huge portion of my life without my daughter. It seems like sometimes I never even had a daughter, because it’s been so long.”

For Pineault, Oppal’s refusal to hear from a number of key police and Pickton farm witnesses, requested by Cameron Ward, lawyer for her and other families, or allow any discussion of widespread cover-up allegations against the police meant the final report’s release brought no closure or healing.

“We went in hoping to find out a lot of things that we didn’t find out, a lot to do with Oppal’s [not] letting Cameron call in witnesses he needed to call in,” she said. “There’s a lot of unsatisfied question about the way the whole thing was run. It was a joke.”

The report’s release came only days after another tearful press conference on Musqueam First Nation, in which Aboriginal leadership mourned the death of 16-year-old CJ Morningstar Fowler of Gitanmaax band, found murdered in Kelowna.

“As a society, we can and must do better to protect the vulnerable among us, to protect all our citizens against violence,” said Jody Wilson-Raybould, newly re-elected BC regional chief of the Assembly of First Nations. “We must seek justice for our murdered and missing women, girls, and men. We look to the public to assist us, and pledge with us to end violence… and to stand with the families of all the murdered and missing women and girls across this country.

“I look to you, Mr. Prime Minister, to assist us, and we call for a national inquiry into the murdered and missing women.”

Ernie Crey, a frequent spokesperson on Aboriginal fisheries and Senior Policy Advisor at Stó:lo Tribal Council, lost his sister Dawn to Pickton. For years he was among many families arguing for a public inquiry. Crey applauded Oppal’s report as “comprehensive” and a “left, right and upper-cut delivered to policing agencies for their terrible failures.”

“It went well beyond what I thought he would offer,” he told Windspeaker. “It went to great depths examining the issue of what became of the women, and where police fell well short of the mark.

“Even though he’s submitted his report, to me, it doesn’t end here. We’re going to have to work with Steven Point… with the government itself, and with the police agencies, to give legs to some of the recommendations, to make sure they’re implemented.”

As each year passes, the pain of missing and murdered women continues to haunt many of the families. For Pineault, Christmas and Jan. 11, the day her daughter was last seen in 1997, hold tragic significance.

And while the inquiry brought her no solace, the Vancouver resident is discovering that projects like Butterflies in Spirit–a dance troupe of missing women’s family members–and the installment of “memorial stones” around the city have been an important part of her healing journey.

Also important, she revealed, is her own re-discovery of her Indigenous roots and culture.

“I never would have said this two years ago,” she told Windspeaker, pausing. “But for me, I want to start getting Aboriginal healing.