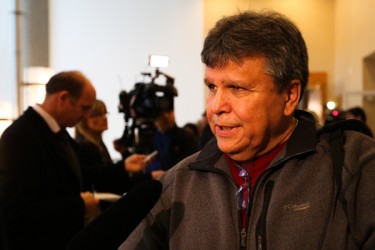 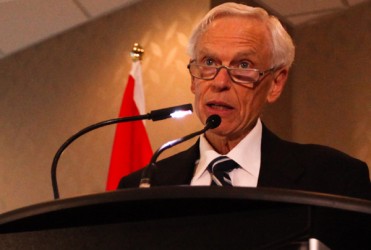 Justice Bruce Cohen delivered his much-anticipated report on the collapse of the Fraser River sockeye fishery on Oct. 31, to muted applause from First Nations and environmentalists.

And though the province’s Conservatives immediately blasted him as “a timid man” and his inquiry an “abject failure,” the former B.C. Supreme Court judge minced no words.

Key among Cohen’s findings were that the Department of Fisheries and Oceans (DFO) has failed to protect wild salmon because of “divided loyalties” in promoting the aquaculture industry, that climate change poses a “grave” threat to salmon, and that the precautionary principle must be applied to limit fish farm expansion–and most importantly, that if any future scientific evidence deems the industry poses anything more than a “minimal risk,” it should be shut down.

“When DFO has simultaneous mandates to conserve wild stocks and promote the salmon farming industry,” Cohen told reporters, “there are circumstances in which it can find itself in a conflict of interest because of divided loyalties.

“DFO’s current role in relation to salmon farming is broader than the protection of wild stocks. It extends to the promotion of the salmon farming industry and farmed salmon as a product... DFO’s first priority must be the health of the wild stocks.”

And while Cohen warned that federal cuts to the Fisheries Act in its omnibus budget implementation bill, Bill C-38, could contribute to the loss of wild salmon through habitat loss – “I find troubling the thrust of some of the amendments,” he said – the commissioner found no single cause for the disastrous 2009 collapse of the sockeye fishery, which shuttered the Fraser River’s commercial fleet and curtailed Aboriginal food, social and ceremonial (FSC) fisheries.

“Some, I suspect, hope that our investigation would find ‘the smoking gun’ – a single cause that explained the two-decade decline in productivity,” he told reporters gathered in a Vancouver hotel for his report’s release. “That notion is appealing but improbable.

“In my view, unless significant remedial measures are introduced soon, the stressors that are currently believed to affect sockeye negatively will continue to do so... My concern is that… amendments to the Fisheries Act will be focused more on fisheries than on habitat. I heard time and time again from First Nations witnesses, from non-First Nations witnesses and from scientists that the priority ought to be on the health of wild fish. You can’t have healthy wild fish unless you have healthy habitat. Any move away from a focus and attention to habitat could be very damaging to the health of the wild stocks.”

First Nations fisheries advocates told Windspeaker that the report–though cautious in its approach, not making a final ruling on evidence of disease transfer from fish farms–deserves a passing grade.

“It came up short in some really important areas to us–specifically the importance of including Aboriginal knowledge and know-how in fisheries management, or recommending a stronger role for First Nations in management,” he explained. “I was hoping for a recommendation that would be transformative, that would call for substantial change in that area. All along, it’s been government’s management of the resource that’s, by-and-large, brought us to the point where we are.”

“Just on the report itself, I’d give it a B or B-minus,” he said. “The final grade is going to be dependent on how well Harper listens, and how well he actually embraces and acts upon the recommendations found in this report.

“It was good to see in [Cohen’s] recommendations his comments on aquaculture and the impacts it potentially has–and to bring DFO back to its primary objective, which is to safeguard wild fisheries, instead of being a big cheerleader, promoter and investor of aquaculture and fish farms.”

Said Clare Backman with the BC Salmon Farmers Association regarding the report, “These recommendations are all about protecting wild salmon, which is central to the work that we do each day on our farms. We’re confident that our farms are not a risk to wild salmon and support more research to confirm that.”

There wasn’t only cheering outside Cohen’s report launch. BC Conservative Party leader John Cummins–who has long been an activist for commercial fisheries, occasionally clashing with Aboriginal fishers and the DFO on the waters and in the courts–called the report an “abject failure.”

“F-minus,” he replied to Windspeaker’s term-paper query. “It’s a complete and abject failure.

“The expectations were quite simple: that he was going to provide a blueprint for management of the Fraser River fishery,” Cummins continued. “That was the responsibility. It’s not there.
“He heard testimony in there that 97 per cent of the fish that are caught under [Aboriginal] food, social and ceremonial licenses were sold illegally. I don’t see where he’s addressing that. I don’t see where he’s giving advice to the department to ensure that the law is enforced. That’s the problem – there are no concrete steps or suggestions in that report.”

The inquiry generated widespread interest from Indigenous communities in B.C., partly due to the central importance of salmon in coastal First Nations cultures.

“[Cohen] talked about the importance of biodiversity and what he called ‘ecosystem-based values,’ which to me are First Nations values. It means the bioregionalism of a place: knowing the species names, their personalities, what they’re able to do in their life, and how they interact with humans. The precautionary principle is really just adhering to what has been an ancient practice here on the coast in order to care for our wild salmon stocks… All of the protection that humans afford salmon, and all of the relationship we’ve had for many centuries here, is critical to continue.”