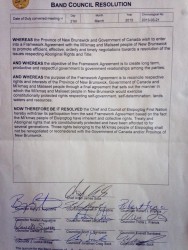 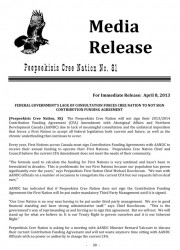 First Nations from coast to coast of Canada are using strong language in reaction to changes in this year's financial contribution agreements from the federal government, with one Alberta band even planning to take a complaint to the United Nations if Aboriginal Affairs doesn't budge, Windspeaker has learned.

In a problem that is affecting bands in almost every province, chiefs and councillors say some First Nations are being required to “sign off” or “endorse” controversial omnibus legislation, which has come under fire for gutting environmental review processes, imposing changes to band governance, and easing industrial development of reserve lands.

“It's saying that – for the bands that sign off – they're making reference to both of those bills, and most of us are against that. We're kind of put up against the wall, especially if you're a band that really depends on the CFAs... You're put up against the wall: if you don't sign off by a certain date, you lose your funding. Our education funding is really affected.”

But the government insists the concerns are misplaced, and that this year's agreements in no way pressure bands to agree to legislation. As well, several Aboriginal leaders argue the agreements have always been contentious, and some wonder if Idle No More has simply woken up band members to an older problem around funding pressures on their leaders.

Makinaw, whose band receives roughly $13 million through the agreements, told Windspeaker that Ermineskin First Nation is hoping to pressure Aboriginal Affairs into removing the contentious clauses, but if that fails, the chief vowed to take a complaint to James Anaya, the UN's Special Rapporteur on the Rights of Indigenous Peoples.

It's a move Makinaw made headlines for last year over the Conservatives' omnibus legislation, and led to media headlines when Canada refused to allow Anaya entry into the country to investigate.

But Ermineskin, compared to some bands, is in a relatively strong position, Makinaw said, joining a chorus of leaders who told Windspeaker the need to reduce federal dependency and control is greater than ever.

“In the last two years, we've been taking our money out of Ottawa, so we're one of the bands that's fortunate that way,” he explained. “We're less dependent on them because of that.”
However, many bands receive the entirety of their operational budget from Aboriginal Affairs. The situation for them is dire, several leaders explained.

“Not signing off means we don't get any dollars for our community for I don't know how long,” said Chief Casey Ratt of Barriere Lake nation in Québec. “At this present time ... we don't have any economic opportunities as some other First Nations communities do; we're pretty isolated.

“It's a tactic they've always used: 'If you don't sign off, you're not going to get the money.' It's always the same with Indian Affairs; they know our community relies solely on the department dollars to run our community. Of course they're going to play that hand.”

Barriere Lake, which the federal government has placed under third party management, and which had an Indian Act band council imposed on it in 2010, overturning its traditional governance system, now depends on the government for all of its roughly $3 million budget. The council doesn't want to sign this year's agreement because of the omnibus budget clauses, but suspects the third party manager will simply sign off if they don't.

At least one band in British Columbia has also expressed concern about changes to their contribution agreement this year, a source close to provincial leadership told Windspeaker, but felt it had no choice but to sign off and keep their opposition private out of fear of repercussions if it complained.

But Aboriginal Affairs has denied that any of the agreements force bands to “endorse” any legislation.

“The changes made to the 2013-2014 funding agreements are solely administrative in nature and do not in any way change the authorities or requirements of our funding recipients,” the department said in a March 15 statement. “There is no explicit or implicit funding condition in any of the current or pending departmental financial agreements with First Nations regarding either C-38 or C-45, both recently passed legislation. The department is in contact with concerned First Nations and encourages any First Nation with questions to contact their local regional office.”

The agreements did not contain changes for all bands, either.
“We didn't have any changes to the language at all,” said Chief Lynn Acoose of Sakimay First Nation in Saskatchewan. Unlike many of the affected bands, hers is not on a CFA but rather a “block payment” plan – or flexible transfer agreement – signed three years ago, one of a number of alternate funding models. But Sakimay was concerned enough about other bands' reports of pressure to sign this year's agreements that it passed a band council resolution criticizing the changes. But the problem is not a new one, she emphasized.

“The contribution agreements have always contained language that compromises our sovereignty and inherent and treaty rights,” Acoose said. “There's always a clause that states that the contribution agreement will not constitute a variance from any existing and future federal legislation–something to that effect. They always refer to federal legislation.”

While many bands fret over whether they should sign, in case they lose all their funding for essential services, some have refused, including Peepeekisis and Onion Lake Cree nations in Saskatchewan.

In the Maritimes, one of the most vocal opponents of the changes is Esgenoôpetitj (Burnt Church) First Nation in New Brunswick, a band which says it has been punished financially ever since its high-stakes fisheries conflict with the federal government in 1999.

It refused to sign this year's agreement because it did not contain the usual “non-derogation” clause ensuring the document could not compromise existing treaty rights, and instead contained annexes which asserted more-than-usual control over band finances, as well as agreeing to the imposition of federal legislation.

“As of April 1, because we didn't sign, they said they'd withhold our funding–all our funding,” said Councillor Curtis Bartibogue. “The essentials: payroll, social (assistance), all the day-to-day funding our band office and administration needs to function as a community. They also threatened they'd probably impose a third party or co-management on our community.

Bartibogue and the band's chief, Alvery Paul, told Windspeaker they initially flagged the concern when Aboriginal Affairs only gave them four days to sign the agreement–unlike the usual month–and repeatedly phoned to ensure they had agreed. It raised a red flag, they explained; a deadline pressure that a number of bands Windspeaker interviewed experienced as well.
“Last Monday (March 11), we received ... a package in the mail,” Bartibogue recalled. “On Tuesday, the agreements were put on my desk. We really didn't pay any mind to it; usually, the funding agreements come every year, and usually there are no significant changes to them.

“But this year, people were putting out warnings about the new funding agreements; I decided to take a look, and sure enough, there were a lot of changes within our agreement. This has got to be outright illegal what you're doing! They gave us a deadline of Friday at noon.”

With the band's uncertainty over whether it will receive social assistance cheques, education, band office operations expenses or sanitation funding come April 1, Bartibogue said the pressure to sign quickly off on a document the Mi'kmaq tribe disagrees with feels akin to punishment.

“We went through a lot of hardships, almost as a punishment for the fishing conflict we had with federal government in 1999,” he said. “I wouldn't say it was sanctions, but it is very close. It was hard to get funding for anything until just a few years ago. Things were just letting up for our community, and now they have to do something like this.”

Not all band leaders are as worried about the funding issue. For Chief Todd Peigan of Pasqua First Nation in Saskatchewan, the focus for his band is to assert Indigenous sovereignty and reduce dependence on the government.

UPDATE:
Photo: Elsipogtog First Nation BCR opting out of framework agreement as many other First Nations are also doing.