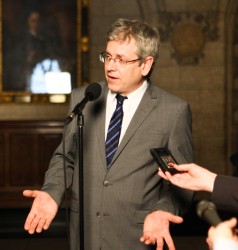 “School should be a time for dreams,” envisioned 15-year-old Shannen Koostachin, before her death in a 2010 car accident. “Every kid deserves this.”

Shannen’s dream–to bring First Nation children’s unequal education up to Canadian standards–came one step closer to reality on her home reserve of Attawapiskat in northern Ontario on June 22 when the struggling community broke ground for the new school for which she had fought.

For the Member of Parliament who named the Shannen’s Dream campaign and championed Aboriginal education equality in the House of Commons, seeing construction begin in the impoverished reserve in his riding was “very, very emotional.”

“To see the shovels go in the ground was very poignant,” Timmins-James Bay New Democratic Party MP Charlie Angus told Windspeaker. “It was the day Shannen would have graduated from Grade 12.

“We’re looking at turning a new leaf, giving children a chance for better future... There’s a system of educational apartheid in Canada. Children are guaranteed basic education rights–unless they live on reserve, and get whatever Indian Affairs decide to give them.”

Shannen’s Dream, as Angus called it, became the name of a country-wide campaign, led by children both Aboriginal and non-Aboriginal, that culminated in an unusual moment of federal cooperation: a rare unanimous House of Commons vote on Feb. 27 declaring that “all First Nation children have an equal right to high-quality, culturally-relevant education,”  and “committing to provide the necessary financial and policy supports for First Nations education systems, providing funding that will put reserve schools on par with non-reserve provincial schools.”

“Shannen Koostachin’s dream was, in part, a safe and comfy school,” Spence said in a statement. “We are happy that this part of her dream will soon be realized. The construction of the new school is a great accomplishment for our First Nation.”

For Angus, the passing of the federal legislation likewise deserves praise, as does the government’s stated commitment to improving and funding Aboriginal education. But no community should have to fight as hard as Attawapiskat, already shouldering the burden of crises from housing to health and crushing poverty, he argued. Those crises led to a national scandal over dismal housing conditions last winter, and the controversial imposition of third-party management (since lifted) on the remote community, a decision widely criticized by Indigenous leaders.

“We shouldn’t have to go to this length, or go to it school-by-school, community-by-community,” Angus said.
“There are so many communities in the same boat.

“Other kids are being educated in substandard or even dangerous conditions – in some cases without even schools... If these were public schools (off-reserve), there would be charges laid. Children have been dealt a rotten hand and nobody cared.”

The government dismissed concerns that its funding promises may fall through, and said it is committed to the cause.

“Our government believes that education is the foundation of strong, healthy communities,” said John Duncan, Minister of Aboriginal Affairs and Northern Development Canada, in an announcement. “We are committed to working in partnership with Attawapiskat First Nation to ensure that its youth receive a quality education.”

Duncan pointed to the government’s investment in 22 new schools and more than 200 renovation projects as evidence of its commitment to equalizing First Nations schooling, as well as its 2011 Joint Action Plan launched with the Assembly of First Nations.

For some Indigenous leaders, however, their hopes of “culturally-relevant education” and “First Nations education systems” legislated by the House of Commons have yet to see the necessary supports materialize.

“We’re developing our own education authority, and our own school board structures,” Anishinabek Nation’s Grand Chief Patrick Madahbee told Windspeaker. “With the work we’re doing on education, Minister Duncan has said it’s an excellent model to be promoted across the country. But we’re waiting for funding on that model, It hasn’t arrived yet.”

According to the Assembly of First Nations (AFN), 219 Indigenous communities in Canada – just under half – need a new school. And of those, 70 per cent say they have waited more than five years with unanswered requests; 13 per cent have waited more than two decades. The AFN estimates that $500 million in funding per year would be required to equalize Aboriginal and non-Aboriginal education.

The funding gap is real: First Nations students get $2,000 to $3,000 less per year for education than off-reserve students, according to CBC.

The Shannen’s Dream campaign has drawn youth across the country to lobby for action on the inequality of Native schooling. Two years before her death, Koostachin herself rose to prominence when she confronted then-Indian Affairs minister Chuck Strahl, lambasting his refusal to replace the temporary portables long-used as a school in Attawapiskat, following a 2000 diesel accident. The teenager was nominated for an International Children’s Peace Prize as a result of her efforts.