Aboriginal pavilion will tell “our story” our way 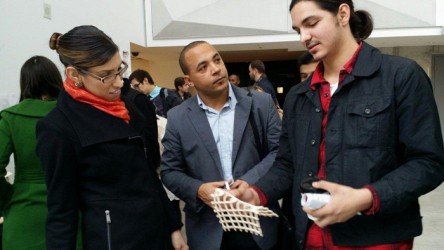 A $1.2 million project known as the Aboriginal Pavilion will showcase the best in Indigenous arts and culture during the July 2015 Pan Am Games in Toronto. The Pavilion will occupy 1.2 acres at Toronto’s Fort York.

Cynthia Lickers, executive producer of the Pavilion, reports to a group known as the Aboriginal Leadership Partners (ALP). Fourteen groups including First Nations, political representative organizations and Toronto community agencies have come together for the very first time, she said. They are operating independent of the Toronto 2015 Pan Am Games, a decision taken by the ALP to be in their best interest. No financial support is being provided by the Games, said Lickers and one of her responsibilities is to secure the funding.

Included in the ALP is the host First Nation for the Toronto Games, the Mississaugas of the New Credit. Other partners include the Native Canadian Centre of Toronto, Metis Nation of Ontario, Six Nations of the Grand River and Miziwe Biik Employment and Training.

Rheanne Chartrand, artistic associate for the Pavilion, said the intent of the project is to provide a gathering place where visitors can gain a greater awareness of Aboriginal people, the diversity of nations and within that, the diversity of
individuals. Evening concerts, theatre and dance performances, markets
featuring arts, crafts and traditional food, and cooking and crafts demonstrations are being planned. Chartrand said a central feature is the Cultural Village which will include up to six homes around a common fire.

Included, among others, is a Metis Voyageur tent, a Haudenosaunee Longhouse and an Inuit home where visitors will learn how different nations live, see a craft
demonstration or even take part in a craft class.

“We’re providing a gathering place to tell our story,” said Chartrand; “our story from our perspective. We want visitors to feel enriched by their experience in the Pavilion. All of our activities are geared toward a general audience – families,
children and adults. We want them to celebrate with us and to have a good time
while they’re learning.”

Lickers said they are also hoping to ignite enough interest to have lacrosse included as a Pan Am game in future. Currently, she said, there are only 10 countries playing lacrosse and 14 are needed to have it included in the Games. Two lacrosse games are planned in the Pavilion area, Lickers said, and she hopes
these will generate enough excitement to get at least four other countries to
take up lacrosse.

Lickers and her staff of three are crowded into two small offices on the third floor of the Native Canadian Centre of Toronto. “There are about eight of us working on this,” said Lickers, “with the design and media relations people and others working from home.” It’s a small group to carry out what Rheanne Chartrand calls, “a monumental project. This has never been done in Toronto before, not on this scale and it’s important we get it right.”

Associate producer Jason Jenkins is looking for between 500 to 1,000 volunteers for everything from setting up the Cultural Village to working with Elders and artists, and greeting and directing Pavilion visitors. Volunteers don’t have to be Aboriginal, he said. Outreach activities at various venues across the city are planned.

Jenkins is also responsible for arts and food markets and recently issued a call for vendors. “We want high-quality products that are representative,” he said.

A key partner, said Lickers, is Planet IndigenUS, a global, multidisciplinary contemporary arts and cultural festival. The festival is co-produced by the Woodland Cultural Centre in Brantford and Toronto’s Harbourfront Centre. Planet
IndigenUS is scheduled to take place during the Parapan Am Games in August
2015.

“There will be a lot of competition for an audience with everything else that will be happening in the city. Everyone’s vying for the same audience,” said Lickers.
The Pan Am Games is also planning programming with Aboriginal content, said
Rheanne Chartrand. The team is hoping social media and networks of participating artists will generate a high volume of visitors.

A press conference that took place on Nov. 18 (after deadline) launched the
Pavilion initiative. An announcement of funding for the Pavilion from the Ontario Minister of Tourism, Culture and Sport, Michael Coteau was expected.

More than 7,000 athletes from 41 countries are expected to participate at the
Toronto Pan Am Games.

Photo Caption: Rheanne Chartrand, artistic associate, and associate producer Jason Jenkins will be looking for volunteers for the Aboriginal pavilion held during the 2015 Pan Am Games.