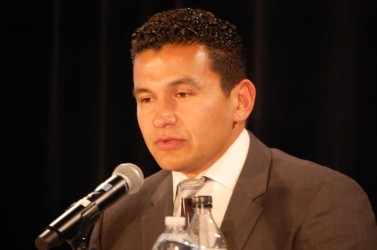 An increase in Aboriginal attendance at post-secondary schools across the country is reason to celebrate, but the challenge to hold on to those students still remains.

Figures released by both the University of Winnipeg and University of Saskatchewan show an increase of more than 10 per cent for first-year enrolment for students who have identified themselves as Aboriginal. Part of that increase can be attributed to a larger number of students self-declaring, and the universities doing a better job of tracking their Aboriginal students, as well as to a growth in that particular demographic.

But other reasons for the increase are both more specific and deliberate.

“We’ve done a lot to reach out to Indigenous students directly in terms of access programs,” said Wab Kinew, University of Winnipeg director of Indigenous Inclusion. He notes the increased enrolment of just over 10 per cent is consistent with the last few years.

The U of W has a wide variety of bursaries and scholarships, including a number which are specific to Indigenous students. The university also waives the tuition fee for children of the child welfare system, covering those costs internally.

U of W offers a high school on campus, which helps with the transition into university, as well as a site off campus on the north end of Winnipeg, making university access easier.

Work on the ground is complemented by work undertaken at the governing level, which includes Indigenous people in senior executive roles and an Indigenous Advisory Circle, which considers policies and decisions that affect Aboriginal people.

“That combined with a lot of other work on campus has created a more inclusive environment and that has encouraged more people to consider the University of Winnipeg,” said Kinew

“The university is making great strides in supporting Aboriginal students and providing lots of interesting programs for them to enroll into,” he said.

The Aboriginal Students Centre “creates a sense of community,” says Joseph, offering social, cultural and academic supports, including Elder services, pipe ceremonies and sweats. There is also soup and bannock Wednesdays, which include both off and on-campus service presentations.

But as excited as Joseph is about the increased first-year enrollment for Aboriginal students, he says holding on to those students is a challenge.

“Retention is the bigger piece,” he said. “It is an issue and that’s something we have to work through.”

Aboriginal students have been historically under-represented in post-secondary institutions, says Joseph, for a variety of reasons including social, cultural, academic, housing, childcare and financial.

“So when universities are thinking about encouraging and supporting Aboriginal students and going on to pursue a degree at their institution, they have to develop specific types of approaches in order to support them, ones that meet those specific challenges,” he said.

Joseph, who has only been in his position for four months, said he is working with the different services on the university to develop an integrative approach to provide proactive measures to address the issues facing Aboriginal students from the time they are recruited to the time they graduate.

“The big focus of my work is to address these systemic issues at the root so that when students do come here they have a really good experience and they have supports that are there to catch them before they fall,” he said.

While it doesn’t fall within his job description, Kinew says there are times he will “physically just sit down with a student,” who is ready to leave and hammer out a solution. He notes that the attrition rate for Aboriginal students is higher than other students. “It is a challenge we want to improve on, but it’s not a crisis. It’s a fairly narrow gap.”

Considering the burgeoning number of young Aboriginals in Canada, post-secondary education, whether university or trade school, is an important step.

“It’s increased prosperity,” said Kinew. “The other thing we know is that university grads are more likely to have children who go to university and be successful. It becomes a multiplier effect.”

Higher education means increased earnings over a lifetime which translates to an increase in the quality of life.

“The reason that’s important to me in the community isn’t just so we help people have a good quality of living,” said Kinew. “Once people are financially independent… then they’re free to pursue the things I think are really important to Indigenous Nations, like language revitalization, cultural resurgence, volunteerism in their community, helping out those who are less fortunate than them. Once you have a good income you can afford to spend time giving back.”

“We need more leaders in community to have this higher level of education, not only within traditional areas like education, social work and law, but also within the sciences so that when opportunities arise and issues arise…people within community can speak to them at many different levels and represent themselves, their communities and their Nations,” he said.