Activism is in the blood, says tar sands warrior 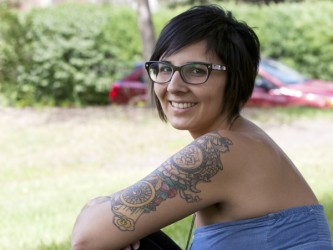 “How,” asks Eriel Deranger, “do you change the game?”
With piercings, thick-rimmed glasses and a tattoo across her heart–“Love Is The Movement,” its cursive letters read – the 33-year old Athabasca Chipewyan First Nation activist is not one you’d expect to be working in her Band office.

But in the foremost Indigenous community battling the Alberta tar sands, the world’s largest industrial project, the mother of two has for years wondered how to change the system.

Deranger has learned the tools of international Indigenous law; she’s campaigned to reform global banks; she’s worked as a land claims researcher; and she’s held positions in some of the biggest environmental organizations.

Today, alongside her partner Kelsey, her 13-year-old daughter and her 16-month-old son, Deranger has returned home to northern Alberta to fight the powerful oil and gas sector.

“We’ve been inundated with green-washing and propaganda from government and industry for so long, it’s not until our people start getting sick and losing their ability to go hunt and fish that we start to notice it,” she tells Windspeaker, leaning on her table.

“We’re learning the hard way, but at least we have some leaders willing to go out on a limb and take those chances, speak out, and say, ‘Enough is enough.’

Despite the dark humour, Deranger exudes energy and purpose. There’s fight in this young warrior; a fight she says she learned from her upbringing.

While Deranger’s story is unique, she represents a new generation of young activists defending their territories using whatever tools are available across the country.

“Activism runs in my blood, I guess you could say.”

“After everything fizzled out... the whole thing went crazy,” Deranger says. “My mom said, ‘I’ve gotta get out of here.’ And my dad replied, ‘Just come with me – we’ll go back to the bush. We’ll go live on my trapline.’”

And so Susana Deranger left her homeland behind and eventually ended up raising Eriel’s older sister in the woods near Uranium City, Sask. After meeting at the confrontation at Wounded Knee, her parents would soon face a new threat: the Dorado mining company.

Exploiting a legal loophole at the time allowing family members to sell off their entire families’ land rights under certain circumstances, the company convinced Eriel’s relative – whom they found in a bar – to sign away their traditional trapline. Only one month before Susana gave birth to Eriel, armed Dorado security guards arrived.

“In the middle of the day… Dorado ... forcibly removed my family from our trapline,” Deranger said. “After that, we moved around quite a bit, but we spent a lot of time going back and forth, spending time on our traditional land, and understanding where we came from.

“My mom thinks that I’ve always been feisty. Growing up, my mom never stopped fighting. … I always joke that arts and crafts for me growing up wasn’t typical. It was making placards and banners, and helping come up with chants for protests and rallies. I was involved in occupations of Indian Affairs offices, at sit-ins at the Legislature buildings, in protests that took over the streets. That’s the backdrop to how I grew up: the framework that we have rights to the land.”

Through her organizing, Susana Deranger met renowned Anishinaabe author and activist Winona LaDuke. Decades later, the one-time U.S. Vice-Presidential candidate would come to know Eriel too, through her work with the Indigenous Environmental Network (IEN).

“Eriel’s a remarkable young woman,” LaDuke told Windspeaker from her home on White Earth nation in Minnesota. “She’s a really committed person from a beautiful community.

“She was raised in a community that was basically taken over by mining companies – they were basically driven out as a child. Then she moved to another community that’s now in the middle of the tar sands battle. So, her whole life, she’s fought the largest corporations in the world. She’s very smart  and also very strong.”

Though Deranger has worked for the Rainforest Action Network (RAN) and even as the Sierra Club’s interim Executive Director in its Prairie office, she doesn’t call herself an environmentalist. To the core, her fight is primarily to defend her territories, and Indigenous people’s right to self-determination.

“We are key stakeholders – we are owners of this land. Our treaties and the Constitution dictate that we have the right to do this, and we’re going to challenge this as far as we have to. We’ll take it to the highest levels of the courts, if that’s what it’s going to take. We’re shifting away from necessarily challenging current governments to uphold this. We’re challenging the system as a whole, which is obviously flawed, to try to uphold our rights.”

Her education in international Indigenous law, as well as her experience pushing global financial institutions to embrace Indigenous free, prior and informed consent, encouraged her to target the corporations and financiers behind the tar sands, not simply the governments approving and regulating the projects.

“How do you change the game?” she says, repeating her question. “You go to the people with the actual money.
“We’re going directly to the source.”

But the struggle for Native freedom, Deranger believes, is not one of convincing governments, corporations or non-Aboriginals to respect Indigenous rights.

Just as she benefited from her mother teaching her about the 1763 Royal Proclamation and the treaties as a child (“This stuff was drilled into my head!” she chuckles), Deranger says that Indigenous people still need to educate themselves and each other.

“The Indian Act is an example of how segregation still exists in this country,” she said. “Unwrapping all that and digesting it all is really hard, but once we get through that, the process of decolonization can begin.

“We have to talk not just to government and the settler community. First Nations need to understand our rights.”