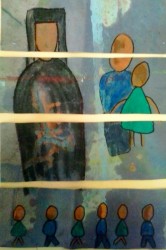 Many residential schools were built from brick so artist Dawn Marie Marchand has invited survivors, their descendants and their spouses to draw their stories in the form of a three inch by nine inch piece of brown paper.

“I want to recreate the stories on a wall and I wanted to use a medium that was easily accessible and anybody could mail,” said Marchand of choosing the brick-shape.

Marchand is coordinating a collaborative installation that will be unveiled during the Truth and Reconciliation Commission’s final national event, which takes place in Edmonton March 27-30.
Marchand is hoping for 1,500 bricks. At the beginning of March she had only 100.  But she isn’t panicking. She is confident that closer to the event, the bricks will start coming in. As well, she knows people who are planning to attend the TRC event and want to see their bricks go up.

“Art builds,” as Marchand refers to them, have been held throughout the province, where those connected with residential schools have created their bricks.

Marchand has personal exposure to residential schools. While her mother never attended, she had aunts, uncles and cousins who did.

“All of the things that affected (my mother’s life) and my life, those intergenerational things affected us despite her not going,” said Marchand, who created a brick that has a photograph of herself with her finger held up to her lips for silence. “Even to this day, (my mother) won’t talk about who her cousins are that hurt her and who are the people who went.”

The brick represents not only Marchand’s mother’s silence, but the silence demanded of the students: don’t speak your language, don’t speak about your culture, don’t speak to your siblings.

Those who walk through the exhibit will be given a river stone to hold and rub, a common practise to help relieve tension in stressful situations. These stones will become part of a permanent Healing Garden installation at Blue Quills First Nation University as part of the garden path.

“The symbolism behind it is that we’re going to put it under your feet so you can move forward,” said Marchand.

The site of the brick installation has yet to be determined.
Marchand is hopeful it will end up as a permanent installation somewhere when the TRC event concludes.

There will be Aboriginal art work spread throughout the downtown area, says Debbie Hubbard, a member of the regional advisory committee for the national TRC event.

“One of the things (we’ve) really tried to be intentional about with this event is in engaging the arts community and particularly some of the Aboriginal arts,” said Hubbard. “There’s a real recognition that in Edmonton there’s quite a vibrant Aboriginal, Inuit, Métis representation of skilled artists.”

While the brick installation is not a formal TRC exhibit, there will be a collection of artwork from Alberta Aboriginal artists on display in the Enterprise Square gallery in the former Hudson’s Bay building from March 20-April 18. Marchand is researching and writing the commentary to go along with the exhibit, which is a body of art purchased by Aboriginal Affairs and Northern Development Canada in the 1990s. It is the collection of work undertaken by members of the Alberta Indian Arts and Crafts Society, which operated from 1975-91 and includes such well-known names as Alex Janvier, Joane Cardinal-Shubert and Faye Heavy Shield.

“This artwork is so beautiful.  It’s like 25 years ago and it’s so relevant and contemporary and incredible,” said Marchand. “This is a real great opportunity, especially for the new generation.”

Photo caption: Artist Dawn Marie Marchand writes of this “brick” she painted, “I was remembering another story, I was told. A story where a young girl went to school with her brother. Even though they were together they weren’t allowed to interact.”