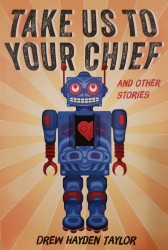 What happens when science fiction meets Aboriginal literature? These two genres rarely—if ever—come together. Drew Hayden Taylor has broken new ground with the release of his book “Take Us to Your Chief.”

“It’s always been my observation that Native literature and theatre is a very specific and narrow path. It’s either a victim narrative, or dealing with something historical, or dealing with the repercussion of what I call post-contact-stress-disorder… so it’s all distressing and dark,” said Taylor on what has traditionally shaped Aboriginal literature.

“I thought ‘Wouldn’t it be interesting if I was able to take stories steeped in science fiction and filter them through an Aboriginal consciousness?’” he said.

Taylor’s book is a compilation of nine stories, written in a matter of months, after he had been harbouring the idea for the book for many years.

Skillfully interweaving classic science fiction narratives, such as time travel and artificial intelligence, with First Nations issues—historical trauma, the preservation of culture, and “the Good and Bad Native” —Taylor ensured the book had appeal to a wide audience, readers 14 to 84.

“Mr. Gizmo is about a teen in his room with a gun contemplating suicide. Basically, the toy he’s had since he was a kid comes alive and chews him out for doing this. The story talks about how young people are tomorrow’s Elders, and they’re robbing the future and future generations of the wisdom they would have as they get older,” said Taylor, adding that the greater intention behind many of his stories is to educate people while entertaining them.

One of Taylor’s personal favorites in “Take Us to Your Chief” is his story about artificial intelligence. In the story, AI is placed into a computer, and the computer then “develops a fondness” for Aboriginal culture.

“There’s a lot of humour in them. Two-thirds of them are funny. Some of them are humorous, and some of them are darkly ironic in a sardonic way… But while these short stories are science fiction in nature, they’re still what I refer to as stories about Native people and Native communities,” he said.

And, of course, the title of the book has its own significance. It is one of the short stories, and involves a very familiar narrative—the issue of “first contact.” Ordinarily, in science fiction novels, first contact involves aliens invading the planet Earth.

In Taylor’s book there is a similar scenario, only the aliens are invading a First Nation’s reserve. According to Taylor, the story is likened to the first contact experienced by Aboriginal people at the time that European explorers were first coming to North America.

Taylor’s title for this story pokes fun at the classic sci-fi quote “Take us to your leader”, used in a number of movies about alien invasions.

“I’m not remaking the wheel, but now I’m exploring the concept of first contact, as say when white people landed here and contacted with the Native people. And I’m having some fun with it,” he said.

Taylor, an Ojibway man from the Curve Lake First Nation in Ontario, attributes the book’s creative content mostly to the fact that members of the Aboriginal population do not all share one simplified set of experiences.

To him, the people and the culture are as diverse and multi-faceted as any other culture, enough so to offer him reference material for at least nine different stories, if not more, he said.

“My hope for this book is that it will open the perceptions of contemporary Native story-telling, and it will demonstrate how very wide our imagination is… And broaden the perspective of what Native literature can be described as containing,” he said.

The official book launch is scheduled Oct. 18 at the Bakka Pheonix Bookstore at 6:30 p.m., with reading dates to follow.

For more information or to order the book, go to: http://www.douglas-mcintyre.com/book/take-us-to-your-chief