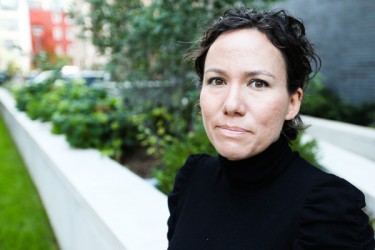 When Goulet–who currently works with the Ontario Arts Counci –premiered her short film at the Toronto International Film Festival (TIFF) on Sept. 12, her hope was to add nuance to the simplistic stigma around teenage pregnancy, but also to honour and explore how youth gain control over oppressive circumstances on-reserve.

“I think an Aboriginal treatment of a young woman having a baby is definitely not as stigmatized as it would be in mainstream Canadian culture, where having a baby is bad because it’s going to kill her future,” Goulet told Windspeaker in downtown Toronto, the city she calls home since leaving Saskatchewan. “That’s the end of the story.

“I don’t think it should be so black-and-white... Part of what got me thinking about that was seeing all my cousins who still live there, and are getting pregnant before they’re 20, and how it seems to be treated differently ... how different cultural contexts mean that teen pregnancy is looked at in a different way.”

Goulet –a Cree and Métis mother of two–screened her 2010 film, Wapawekka (produced, like Barefoot, by Christine Kleckner) at the prestigious Sundance, Berlin and Toronto International Film Festivals. But she admits her new film can come across as uncomfortably intimate with its characters.

In fact, all of the actors were cast from northern Saskatchewan–without any performing experience–and guided through workshops to connect with Barefoot’s storyline and with each other.

“Working with the kids in making the film, I really had a strong appreciation for the challenges they face growing up in northern situations,” Goulet explained. “I wanted to look at and explore that.

“I asked them a lot about the subject matter. That was part of the rehearsal process. They didn’t feel it was outside of their experience at all. In fact, one of the girls who is in the film is now pregnant... I was thinking, ‘You know, it’s not such a bad dream to want to be a mother.’ You get a sense of place and value. I’m a mother myself, and parenting has been the biggest challenge in my life. The girls I talked to in doing my research found a strong sense of value in that–there’s something beautiful about that.”

Goulet, and the 200 would-be actors auditioning, worked intensively with two leading theatre facilitators to prepare.
Warren Linds, a group dynamics professor at Concordia University, who Goulet describes as a formative influence in her high school year, and Linda Goulet, a First Nations University professor, and the director’s mother.

For the director, Tremblay’s presence was not only as actor and Elder. The beaded moss baby-carrier gifted to the teenage protagonist, in fact, was the very one Tremblay had made for Goulet’s own baby, and so were the moccasins worn at the filmmaker’s wedding.

“Her presence there, as a part of making the film, was so important,” said Goulet. “One time, during the workshops leading up to the film, Ida said that when she is speaking in English, she’s always using a borrowed language, so things don’t come across in the same way.

“But when speaking in Cree, she’s speaking directly from her heart. The presence of Cree in the film was definitely very important. Two of the kids speak Cree; it’s very much a part of the area, but it’s also very meaningful in the context of what Ida said.”

The impetus that sparked Barefoot–partly an allusion to a stirring and vulnerable scene when Alyssa removes her socks to stuff her tummy bulge–was seeing her teenage cousins posting to Facebook about their pregnancies.

“I was just a few years into having my own kid,” Goulet revealed. “Parenting is the hardest thing I’ve ever tried to do.

“So I really started to think about all my little cousins and why they’re having babies younger. What a unique characteristic that really is, of the places we come from; of bigger families started younger. There’s a certain truth in that.”

On a deeper level, though, the characters’ struggles with choices around their future serves to represent significant political and historic questions, Goulet told Windspeaker.

“For any Aboriginal person in Canada, you’re always trying to contend with your sense of identity, because all of that has been so fractured the way the histories come together,” she said. “So, as people, we’re always trying to figure out this way to reconcile who we are, where we’re from, what we’re about and how we’re moving forward.

“Here in Canada, there are Third World living conditions all over the country, and yet there seems to be a strange desensitization to it. In this particular story, and this world where it takes place, I wanted to explore a bit more of the complexity instead of looking at it in a black-and-white way; looking at lack of access and choices, growing up in poverty, but also seeing there’s family connections, ties to tradition, there’s love, there’s peer pressure.”