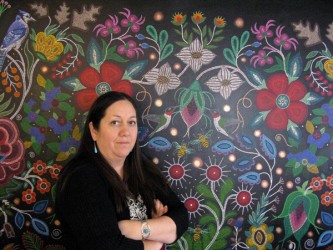 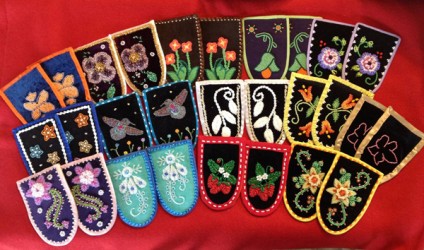 Michif artist Christi Belcourt is a visionary, an activist and a community organizer. Most of all, though, she’s a believer.

She’s a believer in the power of art to create positive change, and a believer in people. But even Belcourt was overwhelmed at the response when she put out a call on social media for people to contribute to the commemorative art installation called Walking With Our Sisters. The project is a tribute to the estimated 600 missing and murdered Aboriginal women.

She was driving to Ottawa in June 2012 when the idea came to her, she said of the project that has a goal of collecting 600 beaded moccasin vamps to symbolize the unfinished lives of the 600 women. Vamps are the top portion of the moccasin.

Initially, she invited other artists to participate in the project by making vamps, and within a week had commitments from 200 people.

Belcourt put up a Facebook group and a week later there were 2,000 members. Now there are almost 8,000.

“I believe this project is spiritually guided,” she said, “that the spirit world is guiding it. My role in it is to be a worker bee and just work hard and try and do all the things that need to get done.”

When she put the call out, Belcourt said, “the only requirement was that it was open to all caring souls.” “Caring souls” from across Canada, the U.S., Scotland, Germany and even Bulgaria have already submitted some 500 vamps. Packages continue to arrive at her home daily and she had no doubt she would meet the 600 target by the July 16 deadline (after press deadline).

The National Tour of Walking With Our Sisters opens at the University of Alberta in Edmonton on Sept. 20. The tour is fully booked until 2018. The vamps will be placed on cloth and people will be required to remove their shoes and walk alongside the vamps.

“This is not 600 individual works of art,” she said. “We’re taking all the works of art that people are submitting and we’re creating one collaborative piece. One unified piece which is like one unified voice.”

The second reason, said Belcourt, is “to honor and acknowledge the fact that the families are still grieving and that they are continually grieving.” The issue needs to be brought to the attention of mainstream Canada, she said, because “I don’t think the broader society believes that there’s 600 [missing or murdered], or believes that Native women are targeted more than any other women.”

She’s concerned that the families and friends of the victims have been left to stand on their own and to fight the battle by themselves.

She hopes Walking With Our Sisters will build bridges and create an opening for dialogue.

“Dialogue in a non-confrontational way,” she said, “because it’s silent. When you walk into the exhibition, everyone who attends is equal. Everyone has to remove their shoes if they want to view the work and that’s a humbling experience, to walk on cloth, to walk beside them. And just the sheer number of vamps, that each one represents the life of a woman. By the time people reach the end, I don’t think it’s possible not to be overwhelmed.”
Belcourt has crowd-sourced every aspect of the project.

“It’s all very new,” she said, “and some people would use the word groundbreaking and some people might use the word experimental.” She’s used social media to crowd-source for the vamps, the music, the funding and even the exhibit tour. She and her team of volunteers have not contacted any galleries as would normally happen with a touring exhibition. Communities who want Walking With Our Sisters in their community have contacted her.

About $6,000 has been raised through crowd-sourcing and many people have included donations when they’ve mailed in their vamps. They’ve received only one government grant and that was from the Ontario Arts Council for the publication.

Belcourt said she’s called on every friend she’s ever had to help with the project.

“Nobody’s getting a cent,” she said. “We’re all volunteering and that was one of my stipulations. It was really important that not even a penny is made off the lives of these women.”

She’s been overwhelmed by the generosity of people and said, “people are really engaged in the project. We’re not alone in the fact we care.”

“We have to trust in the grandmothers, trust in the spirits that Walking With Our Sisters will be everything it has the potential to be,” said Belcourt.

Information about the exhibit tour is available on the web site: www.walkingwithoursisters.ca.