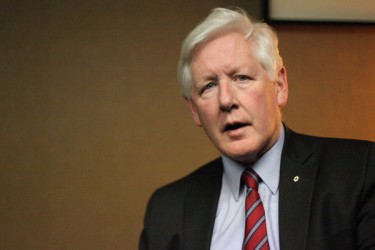 “It’s got the word ‘major’ written all over it,” Bob Rae quips as he describes the vast northern Ontario mining region dubbed the Ring of Fire, to which he is now devoting his energy.

On June 19, the long-time Member of Parliament, one-time Liberal Party chief, and former NDP provincial premier revealed he would be stepping down in order to negotiate on behalf of nine First Nations over the region’s resource development.

The maverick politician shocked many Canadians with his sudden departure from public life, 35 years after he was first elected to Parliament in 1978.

But for some, the bigger surprise was the fact that his destination was not retirement, but rather a simmering mining dispute over an area the size of France, spanning from north of Lake Superior nearly to James Bay, and potentially boasting $50 billion in minerals.

For a region dubbed “Ontario’s oil sands,” the Ring of Fire is scarcely known outside the financial press.

“There are a lot of environmental issues that flow from this... It’s a very, very challenging issue, and it’s really critical for how we do development in Canada. There’s an opportunity to do things in a new way, a different way.”

Controversy over the region’s development has been simmering for several years. Nine Matawa First Nations are in difficult talks over treaty rights, resource revenue sharing, environmental assessment processes and regional infrastructure. Critics hold a mix of concern over the potential for ecological devastation, which often accompanies large-scale mining, as well as fears that Aboriginal people will be left behind in the dust despite the economic boom.

“In a lot of communities, economic activity can happen but First Nations communities have not benefited,” Rae explained. “Studies have shown that the stronger self-government is, the stronger the capacity for making decisions is, the healthier a community can become.

“This is still a struggle. It’s simply taking too long for the provincial and federal governments to wake up to the need for change.”

On top of revenue sharing hopes amongst First Nations, many are aware of the high levels of unemployment and social dislocation in most northern reserves. But without adequate education or training, will the community members be able to find work in the coming resource explosion?

“It is going to take work to get communities in shape to benefit from these agreements,” Rae admitted. “We have a lot of social and economic issues within the First Nation communities.

“The hard fact of the matter is that governments are going to have to commit to doing more to invest in people, to ensure that people actually can benefit from the jobs and opportunities, not only in mining, but in building the infrastructure.”

To hash out these issues, the New Democrat-turned-Liberal will sit across the table from another renowned non-Aboriginal negotiator, former Supreme Court Justice Frank Iacobucci, who represents the province’s mining and northern development ministry.

Some, like Aboriginal policy advisor Russell Diabo, have questioned the high cost of bringing in top-level non-Native negotiators to each side of the ring. Others, like Nishnawbe Aski Nation, want all bands in Treaty 9 territories to have a place at the table, not simply the nine Matawa reserves.

But Rae is no stranger to First Nations politics, and he is aware of what can happen when a resource boom fails to benefit nearby reserves. In Attawapiskat First Nation, the community has remained deeply impoverished despite a massive diamond mine nearby, even though the band had negotiated a revenue sharing deal.

When the mine dumped massive amounts of sewage into the community, flooding many basements, most residents were too poor to repair their homes. The result: a disastrous winter housing crisis which embarrassed Canada worldwide.

Rae was one of the most prominent federal leaders to visit Attawapiskat Chief Theresa Spence during her Ottawa hunger strike in January, and was credited with helping convince her to end the strike after six weeks.

“For me, it was important to resolve the issue, and to give Chief Spence a way of ending her hunger strike in a respectful way,” he revealed when asked about his role. “It doesn’t do our country any good to see people driven to the point of going on a hunger strike in order to try and make a point...

“I don’t think (Prime Minister Stephen Harper’s) helped matters. The reluctance to engage in a government-to-government way with First Nations, and the reluctance to have a regular series of meetings and an appropriate dialogue with the leadership of First Nations, is contributing to the problem. The country has to find ways of responding more effectively.”

Asked about his retirement from politics, Rae admitted to Windspeaker it is no surprise to him he ended up working full-time on Aboriginal affairs.

“I realized that, at this point in my life, I’ve got one or two big mandates left—big challenges—and I very much want to focus on issues that matter to me,” he said. “This is certainly something that matters to me a lot.

“Arguably, if this had come along 10 years ago, I might not have gotten back into politics.”

While the Third World conditions on many Canadian reserves remain dire, and many Aboriginal youth are increasingly venting a simmering resentment, Rae said there is still time for Canada to turn the tables on centuries of broken relationships.

“If you treat people with respect,” Rae muses, “you’re much more likely to get respect in return.”