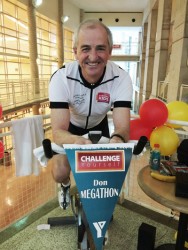 Don Patterson will once again spend a good chunk of his summer pedalling across Canada to promote Aboriginal youth fitness.

The 61-year-old Mississauga commercial realtor cycled across the country, from British Columbia to Newfoundland, in 2012, spreading his message that every child should be able to participate in sports.

Following that ride, Patterson established a non-profit company that created Spirit Runner, a free app for Aboriginal youth that tracks their physical activity.

Patterson, however, will not be taking the same route on his 7,000-kilometre journey this year, which begins on June 21, National Aboriginal Day.

He’ll begin his ride in Inuvik in the Northwest Territories. And he’ll continue on a southerly (sometimes southeasterly) route until he reaches Point Pelee in Ontario, the southernmost point of mainland Canada.

Patterson is hoping to pedal an average of 250 kilometres most days and complete his journey by July 19.

“I had gone west to east (across the country),” he said. “I had this idea I could do a ride of north to south.”

As a result, Patterson will not visit as many provinces this time around. After beginning his journey in the Northwest Territories, he will head to the Yukon. From there he will enter British Columbia. His ride will also take him through Alberta, Saskatchewan and Manitoba before ending up in Ontario.

“Travelling across the country is just stunning,” he said. “But the real part of this is meeting the kids.”

Besides doing his share of cycling, Patterson will also be visiting various Aboriginal groups in numerous communities to spread his message of the importance of physical activity.

Patterson is also hoping his ride this year will raise a considerable amount of funds.

The GEN7 program encourages Aboriginal children to live a healthy and active life through sport and physical activity. And the YMCA, which can provide financial assistance to those who can’t afford its programs and services, is committed to building healthy communities and improving lives.

Patterson is hoping funds raised from his ride will continue to benefit many for a long time.

For example, talks have already been staged with officials who run Canadian Tire’s Jumpstart program. A plan would be to equip Aboriginal youth with bikes and helmets.

“So far I’ve chatted in Alberta and Ontario with 11 First Nations groups and they’ve said ‘sure, how can we get involved with this’,” Patterson said.

Patterson has also already received some big-name endorsements for his ride, which can be seen on his ride blog that has been established at spiritride.blog.com.

Others who have endorsed Patterson’s ride are high-ranking officials from the YMCA, Motivate Canada and the National Association of Friendship Centres.

Patterson estimates he’ll be cycling 10 hours a day during his ride this year.

“I’ll be up at four or five every morning pedalling,” he said. “It will be a challenge.”

Patterson believes some of the most gruelling aspects of his journey will come early on, while he’s riding on the Dempster Highway.

“The first 700 kilometres will be on gravel roads,” he said.

In order to prepare for his lengthy journey, Patterson spent the winters cycling indoors at the Mississauga YMCA. But with some better weather now he has started to go on long rides outdoors during weekends.

But unlike his cross-country ride in 2012, Patterson will not be alone this time around.

“That was a real challenge because I did it on my own,” he said. “This time I will have a support vehicle.”

Patterson added during his first cross-country ride he often had to plan his accommodations and meals on the fly. He does not expect this to be such a concern this time around because he will have a support vehicle, possibly driven by his wife.

Photo Caption: Don Patterson at the Mississauga YMCA on March 1 as he starts his eight hour spin in support of YMCA youth programs.