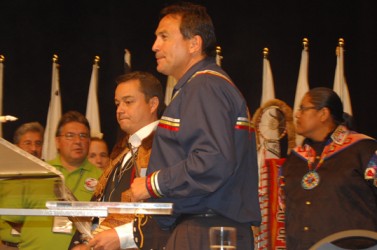 Shawn Atleo faces a slate of seven others, including two Regional Chiefs, as he tries to retain his position as head of the Assembly of First Nations.

When the country’s 633 AFN-member First Nations Chiefs or their proxies cast their votes on July 18, the second day of the three-day Annual General Assembly in Toronto, Atleo’s name will be followed on the ballot by Bill Erasmus, chief of the Dene Nation and AFN Regional Chief of the Northwest Territories; Elaine Gabriel, former president of the Quebec Native Women’s Association; Manitoba lawyer Joan Jack; Diane M. Kelly, former Grand Chief of Treaty 3;  former Manitoba Chief Terrance Nelson; Ryerson professor Pamela Palmater; and Alberta AFN Regional Chief George Stanley. Nelson is the only candidate in the running to have challenged Atleo in 2009 when Atleo became National Chief.

Stanley holds that the large number of contenders – three more than the last election – has to do with general discontent.

Atleo is not surprised by the strength of the candidates and is pleased by the split between men and women. In 2009 there were no women candidates.

Joan Jack says it is time for women to take their place as leaders and is pleased to be joined by Gabriel, Kelly and Palmater in contesting the position of head of the national organization which represents First Nations citizens.

“The chiefs, who are predominantly male, are constantly going around saying that they respect women…. But I think we really need to look at this. We can’t be saying we respect something and don’t take action on it,” she said.

In endorsing Palmater, Morris Swan Shannacappo, twice-elected Grand Chief of Manitoba’s Southern Chiefs Organization, said, “We believe it’s time for the AFN to be led by a female leader – one who can exercise her perseverance and knowledge and give life to an organization that seems to be failing our peoples because of our diversity.”

The National Chief is elected by a majority of 60 per cent of the ballots cast.

Atleo and Nelson were involved in the marathon voting session that took place in 2009 when Atleo was declared victorious when runner-up Perry Bellegarde conceded the race. Twenty-three hours and eight rounds of balloting saw Atleo finish with 58 per cent of the vote. After the first round of balloting, Atleo had 43 per cent of the supporters while Bellegarde had 29 per cent. John Beaucage, who had garnered 15 per cent of the vote and third place and was eligible to remain on the second ballot, made the surprise move of dropping out. He then threw his support behind Bellegarde as did Nelson and the fifth candidate, Bill Wilson. Atleo’s selection as leader marked the longest AFN vote. Atleo succeeded long-time National Chief Phil Fontaine.