Electronic powwow is music made for dancing 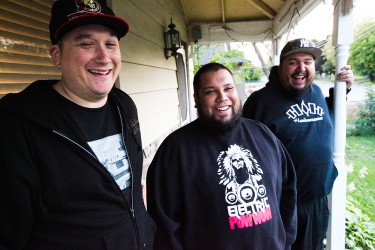 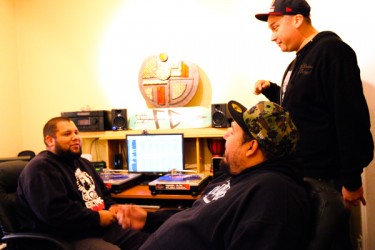 Within half-a-minute, the drums and jingles of this representative track coalesce with the pitch-shifting warble of a heavily distorted synthesizer bass-line. Powwow singers and dubstep-style beats merge to create an entirely new sound that the five-year-old band labels “powwow step.”

“It’s a good doorway to start having conversations,” Thomas says, leaning back on his chair on General’s back porch south of Ottawa. “People that listen to dubstep are now checking out powwow singers all of a sudden, to hear what the original sounded like.

“The same the other way. Kids on reserves are now listening to dubstep, which they’d never really heard before. It’s a good cross-cultural thing, where conversations are being opened both ways.”

But with Aboriginal music often segregated into its own cultural ghetto–or assumed to divide neatly into country-western or hip-hop depending on the generation–ATCR demands a rethink. When Campeau and Thomas started out making mashups (two-song blends) of powwow songs with dance beats, the phenomenon gained fast popularity at bi-monthly Aboriginal nightclub parties.

“It was a huge eye-opener for me, when these guys sent me the mashups,” said General, who is Cayuga of Six Nations, recalling the first time he was invited to one of the parties. “It was something I’d never heard before.

“It’s exactly what I needed. I just knew it was something different I was hearing. The first time I saw a party, it was unbelievable. I’d never seen our own people dance to music like that before. I knew this was going to be a big movement, and I just wanted to be a part of it.”

In 2009, General–a two-time DJ competition champion–was invited to join the band, which rapidly evolved from mashups to laying down original beats and creating their own distinctive material. As his bandmates describe him, he’s the essential conductor to ATCR’s creative vision. Shub is what makes “powwow step” both catchy and eminently danceable.

“The music is made to dance,” said Thomas, who is also Cayuga. “Powwow music–competition powwow songs–are made to make people dance.

“That’s kind of the point of club music and powwow music working so well. They’re both essentially made to make people dance… We’re remixing and playing with the original song; we’re not just adding a beat to it.”

Venturing into General’s house–where he has established a digital regalia of computer consoles, keyboards, mixing boards and other production equipment–the veteran competition DJ guides Windspeaker through a sprawling catalogue of the band’s tracks, mostly unfinished and unreleased.

From dubstep–a popular British-rooted style based on pitch-shifting sub-bass lines far below normal frequencies and syncopated rhythms–to the drug-tinged Southern US cacophony of “trap,” and Reggae-inspired “moombahton” genre, ATCR spans the techno spectrum.

“When Dan came along was really what changed it,” Thomas recalls. “Dan had been producing hip-hop for eight or nine years before that.

“We were just playing around doing mashups. We had these ideas, but not having all the skills to fully realize it. Dan took one look at what we were doing... By the next afternoon, he had already sent us the Electric Pow-Wow drum track. He heard what we were trying to do and actualized it.”

But while ATCR has countless clubs and house parties dancing to powwow music for the first time–both Aboriginal and non-Native–the music’s impact on young urban students fresh off their remote reserves truly kept the three members going.

“It was insane,” Thomas remembers of the inaugural Aboriginal music party the band threw at an Ottawa bar. “Right from the first party we threw, it was packed.

“It was packed full of Indians. People we didn’t even know, new faces to us. Right away, people’s reaction was that this was more than just a party. We had to keep doing it. We had started something that was needed in the city. We’d created a space that was comfortable for Aboriginal people within the club environment.”

“It turned out all those people we didn’t know were students from rural communities who never felt comfortable going out until they heard there was a party geared towards Aboriginals,” he said. “That’s why we just kept doing it. We were told we had to! Now it’s an institution in the city.”

For Thomas, producing music that bridges a youth-driven urban night-scene and traditional Indigenous cultures is not simply an artistic novelty; it’s a phenomenon embraced by young Aboriginals seeking a distinctive identity in their world.

Leaning on a pillar of General’s rural front porch, the three members of ATCR burst into laughter as we set up the quintessential stoic rock band photograph. Stoic is not this group’s game. But their mission, aside from creating a dance-music hybrid of multiple cultures, has explicit political overtones.

“Now, it’s not just Aboriginals who are listening to us,” Campeau said. “It’s cool that we’re getting this kind of attention that makes it okay for everyone to listen to powwow now.

“One interviewer... said it sounded really foreign to her; it was something she’d never heard before. I thought, ‘You’re Canadian, and yet you’ve never heard powwow music before?!’ That’s weird to me. The fact that as a Canadian, you’ve never heard the traditional music of the people who are from here and find it foreign?”

But with the exception of the track “Woodcarver”–which musically documents the police killing of Seattle Native woodcarver John T. Williams–ATCR’s music doesn’t push any particular political message. And yet, the band admits that their music hopes to change the status quo.

“You can’t be an Aboriginal artist and not be political,” Campeau said. “The fact that we’re still here, surviving and thriving now, is already political.

“You wake up in the morning and live your life; you can’t really avoid it. Yeah, we are political, but it’s not really on purpose. It’s just what we’re doing… We’re just unapologetic about being Aboriginal. That’s the only difference.”