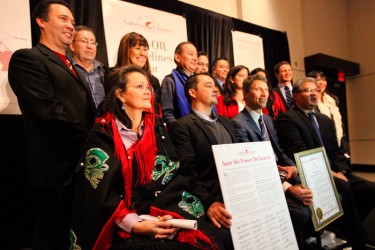 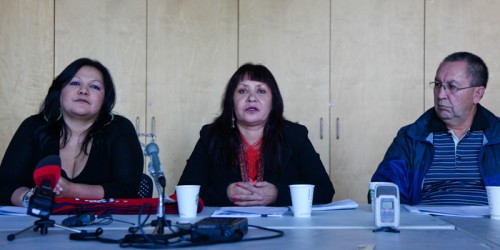 Despite winning the National Energy Board’s support last year, Enbridge Northern Gateway took a hit on April 12 after the town of Kitimat, B.C. voted 58.4 per cent against the controversial project, despite being the job-rich terminus for the pipeline.

A spokeswoman for the Yinka Dene Alliance applauded the referendum results, but said that regardless of the outcome it wouldn’t have changed the minds of the more than 130 First Nations, which signed the alliance’s anti-pipeline Save the Fraser Declaration.

“It was a great victory for many people in B.C. but also across Canada,” said Jasmine Thomas of Saik’uz First Nation. “It’s an expression of the solidarity being shown across this country.

“You can see why they wanted to amp up their media campaign and door-to-door efforts, but we’ve said from Day One that we’ll be there making sure this project never goes through.”

Thomas said the next steps for oilsands pipeline opponents will be to continue invoking Indigenous law as part of their “unbroken wall” of resistance to a project with a high risk of ruptures, spills and tanker accidents.

One day before the plebiscite, Indigenous leaders and land defenders gathered in northern B.C. to reiterate their position that pushing the project through would amount to a violation of their traditional laws, which are based on mutual respect and a relationship with the environment.

“The Save the Fraser Declaration is an expression of our law, but it’s not where our law comes from,” she explained. “We live our law.

“(This) gathering was the start of seeing that happens ... It affirmed for our people that our decision is legally binding. We must ensure that the Enbridge ban is respected and enforced as part of living our law.”

Although largely a symbolic vote by Kitimat residents, which saw roughly three-in-four eligible voters take part, the plebiscite represents “a turning point in the overall campaign” against the pipeline, said Kai Nagata.

“We saw what happens when you give people the chance to vote on this project,” he said. “In this case, this was a community that had everything to gain from the Northern Gateway pipeline, permanent jobs, $5 million in tax revenues, but they decided the risks weren’t worth it.

But with Prime Minister Stephen Harper’s cabinet still to reveal its decision on the pipeline—an announcement is expected this summer—Nagata agreed with Thomas that the tensions between Indigenous and Canadian legal systems will be the most substantial challenge facing Enbridge.

He said the Save the Fraser Declaration’s ban on the Northern Gateway “carries a great deal of legal weight,” particularly since most of B.C. is unceded Indigenous territories, almost entirely without historic treaties.

That could lead to massive lawsuits against the government should it approve the pipeline against aboriginal wishes.
“However, do we want to wait and watch this go behind closed doors in a courtroom for years and years, and cost millions of dollars?” Nagata asked. “Those court cases are ... an enormous financial risk for a small community to take on.

“If we can avoid that in any possible way, through a political solution, I think that’s the best outcome for everybody.”

Such a “political solution,” the Dogwood Initiative proposed, is a province-wide referendum following in the wake of Kitimat’s. Under B.C. law, citizens can trigger a provincial plebiscite if they collect enough signatures in multiple ridings.

The past month also saw another twist in the Enbridge saga with a completely new pipeline proposal, which was proposed as a First Nations-backed “alternative” to Northern Gateway on April 14. But instead of chemical-diluted oilsands bitumen, the idea is to transport the less-risky synthetic crude through a “state-of-the-art pipeline” from an upgrader in either northeast B.C. or northern Alberta itself.

The Aboriginal-owned firm Eagle Spirit Holdings Ltd. revealed that – unlike Enbridge – it had spent years “carefully listening to the feedback and concerns of First Nations communities to learn what it might take to earn a social license for such an important project,” according to a statement from its president and chairman Calvin Helin.

That support includes the backing of Stellat’en and Nee Tahi Buhn bands in B.C., as well as the endorsement of the influential Aquilini Group.

“First Nations have resided on the land for time immemorial,” Helin said in the statement. “Their culture and heritage is infinitely tied to the land and the water.

“We have a lot of work ahead of us and will continue to be respectful of First Nations protocols and seek their consensus, taking their lead to bring forward amicable solutions for the benefit of all communities ... Ultimately, it will be their decision whether or not they support Eagle Spirit Energy’s proposal.”

Whether the alternative proposal gathers enough steam to be seen as viable is still uncertain, but with Enbridge still on the table – as well as Kinder Morgan’s TransMountain pipeline expansion – the Yinka Dene Alliance is calling for a change to how all such projects are built.

Now – after offering gifts at their recent meetings to representatives of the federal government for “finally listening” – the Yinka Dene Alliance hopes Canada will expand its project approval process beyond the current Joint Review Panel model, which the alliance boycotted.

“We’ve been asking for a separate First Nations review process that actually incorporates our laws and considers Aboriginal rights and title,” Thomas said, “but also the cumulative effects of increasing the tarsands and impacts to the climate.”