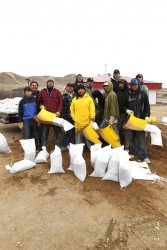 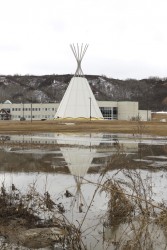 First Nations leaders will start taking action of their own, if the federal and provincial governments don’t do something about the flooding that plagues First Nations communities each year.

Nearly 200 people, including Grand Chief Morris J. Swan-Shannacappo of the Manitoba Southern Chiefs Organization (SCO) and Chief Adrian Sinclair of Interlake First Nation of Lake St. Martin, rallied at the downtown Winnipeg office of Indian and Northern Affairs Canada on April 12 demanding permanent action be taken on flooding concerns. The protestors moved to the Legislature in the afternoon.

Lake St. Martin is one of more than a dozen First Nations in the southern parts of Manitoba and Saskatchewan that had to evacuate residents from homes or declare states of emergency in April.
Leaders are particularly angered by a government decision that puts their people at risk in favor of protecting 500 cottages along Fishing Lake in Saskatchewan. This decision has resulted in the flooding of First Nations in the Qu’Appelle Valley in Saskatchewan and the Red River water basin in Manitoba.
“The federal government fast-tracked a project to build control structures to release water (on Fishing Lake) and this has been the result,” said Greg McIvor, political advisor to Swan-Shannacappo.
The diverted water compounds the impacts of naturally occurring ice jams, frozen ground, and snowmelt. The swollen streams, saturated soil and warm weather all promise to affect water levels taking them to higher than normal or even to record levels for some rivers.
The Qu’Appelle River, which runs from Lake Diefenbaker, northwest of Regina, across Saskatchewan to the Manitoba boundary, is expected to overflow along the entire Qu’Appelle Valley. Officials in Manitoba warn that the Red and Assiniboine rivers could crest at the same time at the end of April. Experts are expecting the Red River to reach water levels higher than 2009, the second highest water level on that river.
At press time, half a dozen First Nations in the two provinces had declared states of emergency, while more than 500 people had been evacuated from First Nations in the impacted area in both provinces.
“The majority of First Nations are fed up with all the flooding and there doesn’t seem to be any interest in government to deal with any of this in a serious manner or responsible manner, so I think (the SCO is) planning some public protests and rallies to bring attention to all of this,” said McIvor.
Assembly of First Nations National Chief Shawn Atleo added his voice to the concerns that First Nations face with recurring flooding.
“This situation needs to be resolved quickly with a sustainable solution that guarantees the safety of the citizens, their homes and their belongings. These communities are already grappling with difficult living conditions and health issues caused by years of flooding. This is now a chronic, annual problem and the people need and deserve action to prevent flooding,” said Atleo in a news release.
Leaping in to the fray is Liberal leader Michael Ignatieff, who was in Saskatchewan campaigning. He told the Regina Leader-Post, “These communities flood year after year; it’s not good enough. We have to sit down with First Nations leadership and think about how we get a preventative strategy.”
The entire waterway system, from dams to the hydro structure, needs to be looked at in a comprehensive manner, said Michael Bear, chief of staff for the Manitoba SCO. Repeated letters and attempts to push an evaluation through the Department of Fisheries and Oceans and INAC have resulted in little response.
The Manitoba government has said that it has raised the issue with the federal government as well but there is no ongoing funding or national strategy in place.
But it seems that the recent rally in Winnipeg has netted some results, at least with the provincial government. Deputy Premier Eric Robinson and Water Stewardship Minister Christine Melnick met with leaders and announced the province would be launching a study into the impact floods are having on First Nations.

As well, in Saskatchewan, the provincial government has established a task force to ensure reserves have the necessary equipment to fight the flooding. The task force has also been charged with helping First Nations plan their flood strategy.

An emergency disaster-relief meeting for the affected First Nations and INAC is scheduled for late April.

“We support the call for immediate action as a priority to protect the people of these First Nations and deliver on sustainable, long-term solutions. We have set this as a key priority for all First Nations to be addressed during this election and this situation is an unfortunate, graphic example of why our communities need action now,” said Atleo.

“Every spring, we’re flooding,” said Hart. “There’s an emotional stress, a financial burden. Everybody is concerned.”

Cowessess anticipated flooding and began monitoring the situation last fall. Culvert work began two weeks prior to declaring a state of emergency on April 12 when the crossing between Cowessess and Sakimay First Nations became threatened by water.

“By nine in the evening (the water) was just about rolling over. So once you have water running over the road it wears it down pretty quick and pretty soon the road’s gone,” said Lerat. “Since then we’ve been monitoring that area.”

A second road way between the two First Nations is also being threatened, but road crews have been building it up.

Lerat met with Chief Guy Lonechild of the Federation of Saskatchewan Indian Nations when Lonechild visited the Qu’Appelle valley shortly after Cowessess First Nation declared a state of emergency.

The flooding situation in the Qu’Appelle valley is “a little bit unnerving,” said Lerat, “but at the same time we’re getting focused, making sure everybody is aware of the situation.”