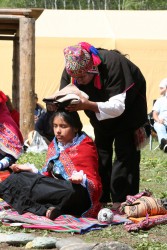 Two years after Prime Minister Stephen Harper issued his apology for the government’s role in residential schools, close to 4,000 people, mostly Aboriginal, gathered in Ottawa to participate in the National Forgiven Summit.

“The crowd was excited to see the actual Declaration of Forgiveness which 24 Elders signed from across the country and was, of course, presented to (Indian and Northern Affairs) Minister (Chuck) Strahl. It was just a really nice moment,” said Rod Bruinooge, MP for Winnipeg South. The declaration, which was prepared by a coalition of residential school survivors, was presented June 12.

“We should be very careful,” said Atleo in a teleconference just prior to the summit. “The word of one survivor, a grand chief, said very plainly that he wasn’t ready, that we’re not ready for this.”

But Bruinooge, a Métis from Manitoba, said his mentor, Elder and Chief Kenny Blacksmith of the Cree Nation of Mistissini, in Quebec, sees it differently. After working with the Aboriginal community for years, Blacksmith saw Harper’s apology as a way for people to release their hurt and anger.

“Kenny’s vision, his philosophy, was to help people release forgiveness. When one forgives you can release that anger, that pain, that suffering. So that was the vision he had for this tour,” said Bruinooge. The summit is a culmination of the Journey of Freedom, in which Blacksmith travelled across the country working with thousands of Aboriginal people in their healing journeys.

Blacksmith is co-founder of Gathering Nations International, a Christian organization that is based in biblical healing. In a recent address about the summit, Blacksmith said, “At this time, we will choose with one voice and one heart to respond to the prime minister’s request for forgiveness, because we are not only ready to do so but we recognize the door of hope is still open and our response will be our key to a greater healing and freedom for our people and nation from a negative past.”
“I think we’ve got to be very careful not to project on to people in a way that sort of places undue pressure,” warned Atleo, however, “and that’s where the original statement about . . . be(ing) careful about the politicization (of forgiveness) is one way to describe how I feel about this. That it is a very personal experience and personal journey . . . that’s the reason why there’ll be a wide variety of feelings and reflections on this summit.”

“Forgiveness is good whenever one can provide forgiveness. It always provides more benefits for the one who is forgiving than the one who has been forgiven. It’s good for people to go through that. Some of these people have been living with their pain for half a century. Kenny’s philosophy, I think, has helped a lot of people. Anytime you can help someone, I think it’s a good thing,” said Bruinooge.

“Two years after the apology, I certainly can look at a number of areas that there is so much more that can and should be done to give effect to the spirit of that important apology,” said Atleo.

“The Aboriginal Healing Foundation . . . was cut off. We’ve seen many doors closed, programs that supported healing . . . but that work is going to be going on for a long time,” he said.

Atleo also pointed to education in which First Nations children on reserve are funded at $2,000 less than their counterparts in the provincial system; the only Indigenous university in Canada is struggling, although it received a one-year reprieve with federal dollars; 65,000 First Nations post-secondary graduates are needed in the next five years; and more schools are needed as well.

Bruinooge felt the National Forgiven Summit and the first national event to be hosted by the Truth and Reconciliation Commission (TRC), June 16 to 19 in Winnipeg, complemented each other.

“There’s historic timing for both events,” said Bruinooge.
The event in Winnipeg is the first of seven national events the TRC will host over the next few years.