Indigenize or Die: A statement of fact? 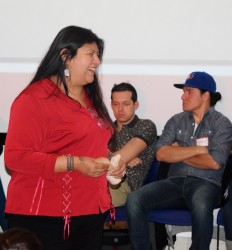 The second instalment of the “Indigenize or Die” series, which explored sustainable living from Indigenous points of views, began with a smudging ceremony in Toronto's OCAD University on March 2.

The series highlights the immediate dangers of climate change and of unhinged capitalism, and offers possible solutions through Indigenous teachings and practices.

“It's not a threat, it's a statement of fact,” said cohost Kevin Best of the series theme. “Unless people choose to re-Indigenize, to connect to the earth, to the spirit and to each other, we’re in big trouble.”

The monthly series comes at a time when Prime Minister Justin Trudeau has promised to endorse all the recommendations of the 2015 Truth and Reconciliation Commission report.

“All the recommendations of the Truth and Reconciliation Commission talk about respecting the treaties, respecting nation-to-nation relationships,” said Best.

“You cannot have a resource-based economy and be consistent with the law of this land. You're gonna have to look at an Indigenized traditional reciprocal economy, where you have abundance but not many material goods.”

Wendy Phillips, an Ojibwa of the Bald Eagle Clan of the Wasauksing First Nation, led the presentation by speaking about many of her tasks and responsibilities as a spiritual leader – or Ahnikgokon – including her expertise on traditional governance.

For instance, she spoke of the disastrous consequences of such legislation as the Indian Act and such concepts as the Doctrine of Discovery on Indigenous peoples’ relationship to each other and to the land. She stressed how important it is for Indigenous youth to engage their Elders in order to maintain their traditional knowledge and decolonize themselves from Western education.

“Today you can walk into a room and ask Aboriginal people if they have an education, and all will put their hands up. But you'll say...'did you learn from your Elders?' And you'll get 100 per cent that will say
'No,'” she said. “So the importance of language, of culture, of our history and our customs become more important today than ever.”

She also highlighted the importance of non-Native people and governments being opened to new perspectives in order to forge legitimate nation-to-nation relationships. Acknowledging the distinct histories and customs of the various nations in the Americas, which date back millions of years before European contact, is a necessary step in this process, she said.

“When they talk about Indigenous or Aboriginal, people like to lump everybody together. But there is a grand volume of diverse nations ...and over 500 different communities.”

She then gave a crash-course on the significance of the various instruments Indigenous peoples use to immortalize historical moments. A few of these include wampum belts, beads and treaties like the Royal

Proclamation of 1763 and the Robinson Treaties. At best, she said, these items present a different perspective than what's written in history books; at worst, they contradict outright lies.

“So this is where, sadly, a lot of us in school were taught the Bering Strait theory, for example,” she said, laughing. “This is not our history, and that's the sad thing – that when we talk about
colonization, usually it's the dominant ones that get their story told.”

Phillips concluded by singing a travelling song alongside her husband and daughter, and urged the attendees to commit to learning about Indigenous culture together and on their own.

“Like each of you have heard, we all take away responsibility, so we hope that from everything that's been said today, something stays with you in heart and spirit,” she concluded. “And hopefully that fire
continues and we begin to see the change that needs to occur.”

The next event will be on March 30 at the OISE on the 7th floor in the Peace lounge.