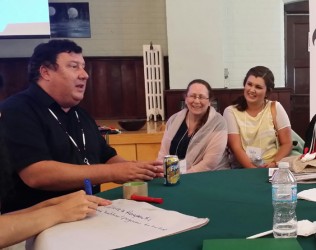 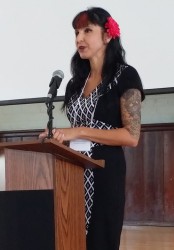 Mohawk psychologist Dr. Rod McCormick believes in the
healing power of nature. Halfway through his keynote address at a conference for mental health professionals on May 28, he assigned the participants a task. Go outside and focus on a piece of nature and ask a question or ask for help.

You have to approach it with humility and come back in five minutes were the only instructions he gave.

About 100 or so people trooped out of the Native Canadian
Centre on Spadina Road in Toronto where the conference was being held. Some sat down on the tiny lawn and focused on a flower or a blade of grass. Others hugged a tree or communed with a pine cone. Still others looked to the sky. When the group reconvened, several participants were eager to share that the exercise had indeed worked and that their questions were answered or direction given by nature.

This took place at the Fifth Annual Indigenizing Psychology
Mental Health Symposium hosted by the Indigenous Education Network. It wasn’t the only thing that differentiated this gathering from other mental health conferences. Most of the speakers placed themselves within the context of family, community and cultural mileau. They also talked about their own personal experiences of trauma and recovery of identity. By so doing, they illustrated the complex mental health issues faced by Indigenous people and the Indigenous ways of healing.

The goal of the symposium was to build on previous and current conceptions of Indigenous psychology and to provide new information and solutions from Aboriginal knowledge.

Conference Chair and Founder Dr. Suzanne Stewart, a member
of the Yellowknife Dene Nation, said “The conference is oversold every year, and we have people coming from coast to coast.”

A registered psychologist, Stewart is Associate Professor, Department of Counselling and Clinical Psychology at the Ontario Institute for Studies in Education, University of Toronto. She is also Special Advisor to the Dean on Aboriginal Education, and currently holds the Canada Research Chair in Aboriginal Homelessness & Life Transitions.

Psychology has not been a hospitable place for Indigenous
people, Stewart said. They are diagnosed with a western lens, and so, “having an event where we’re talking about psychology from an Indigenous perspective, to not only community members but to mainstream psychology audiences is really encouraging,” she said.

About half of the 120 attendees, said Stewart, were non-Indigenous and many of them practice in the mainstream health system. All of the keynote speakers, she said, are highly regarded successful western-accredited academics and they’re all research chairs. They are also highly regarded in the Indigenous community as being rooted in traditional knowledge.

Dr. Rod McCormick is a Professor and Research Chair in Aboriginal health at Thompson Rivers University in Kamloops, B.C. Previous to moving to Kamloops, McCormick was a psychologist and professor of counselling at UBC for 18 years.

In his keynote address, he talked about how the Indigenous
world view is one that is relational, that Indigenous people believe that all things are connected and inter-related. Indigenous people learn to live with, and learn from, nature as opposed to the western mechanistic world view, which seeks to control nature.

When we connect with nature, McCormick said, we can see that
it provides us with many of the things we need for healing – family,
perspective, guidance, empowerment, and balance. In the research and work that he’s done with Indigenous people who are traumatized, he’s found the natural world has been a source of healing and guidance for them. They’ve drawn strength from the mountains that have been there for thousands of years, and learned lessons about adaptability from the way that trees and birds and other plants and animals survive cold winters and hot summers. Nature is an important healing tool, he said, and not just for Indigenous people.

Dr. Raven Sinclair, member of Gordon’s First Nation in Saskatchewan opened her keynote address by bringing out her shaker and singing a traditional song for the earth.

“We’re on a journey of remembering who we are as Indigenous
people and the gifts we bring to the world,” Sinclair told the audience. A “product of the child welfare system”, she was adopted by a white family shortly after she was taken from her family when she was about four.

“The traumas we’ve undergone are totally connected to our
colonial history,” said Sinclair, including residential schools and the removal of children by the child welfare system. The colonial agenda and the underlying reasons for the trauma remains the same, she said. “It’s always about money. They want our land. They want our resources.”

Sinclair is Associate Professor of Social Work with the
University of Regina.