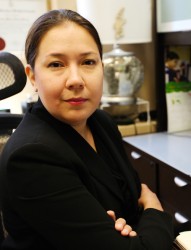 One in every 25 Native children is taken from their families, according to new data. That is 13 times more than the non-Aboriginal apprehension rate, despite Natives making up just a fraction of the general population.

With more Native kids in custody today than ever attended Indian residential schools, child welfare advocates continue to raise the alarm about the record numbers of children being seized, many adopted out into non-Aboriginal families or sucked into the criminal justice system.

Newly released Statistics Canada data also reveals that a staggering half of all kids in foster care – 14,225 – are Aboriginal.
“We’re looking at thousands and thousands of kids who are being raised away from their families,” said Cindy Blackstock, executive director of the Ottawa-based First Nations Child and Family Caring Society. “There are some kids who should be in foster care. But the reason why First Nations kids are removed is neglect driven by poverty, poor housing, and substance abuse; things we can do something about.”

Blackstock and the Assembly of First Nations have brought the crisis to the Canadian Human Rights Tribunal, in a case alleging racial discrimination in child welfare. Protecting kids from neglect, physical or sexual abuse must be crucial priorities, Blackstock said. But behind the distressing statistics is unequal funding and services for Aboriginal and non-Aboriginal families.

The issue around child seizure jumped into the news again with a controversial decision by the Supreme Court in the United States. In June, the top court ruled against a Cherokee father vying to keep his three-year-old daughter, Veronica, who had been adopted out without his consent before birth, then later ordered handed to her dad.

“Children should be placed for adoption only when it’s in the child’s best interest,” Blackstock insists, “not because their parents or other family members have been denied equitable opportunities to care for their child.”

When it comes to adoption, the laws vary from province to province. Most jurisdictions recognize the importance of maintaining connection to a child’s Aboriginal culture, and when possible keeping a child in its extended family or community.

“Look at the number of kids going into care: It parallels the number going into jail. It’s increasing. They’re no better off.”
Asked about her casework, Shields grows emotional, describing one community where 90 per cent of Aboriginal children were seized.

“Do you know what that does to a culture?” Shields asks. “They took all of those children out of their community. It continues to be devastating for Aboriginal culture and families.
“Often, when there is a mother with a history of child apprehension, the ministry will watch her—will hover over her—when she’s pregnant with a child.”

According to another lawyer with a Vancouver Aboriginal delegated agency, the vast majority of kids in custody are in fact removed, not because of physical or sexual abuse, but because of neglect or simply parenting styles.

“It’s one thing if things are coming down to really serious issues of physical or sexual abuse,” said Katrina Harry. “But what everyone has realized ... is that child protection is largely an area that’s poverty-driven.

“People who live in certain communities are watched more closely for signs their child is neglected. A lot of my clients are dealing with addiction, mental health, and domestic violence in the home.”

Ministry workers should try harder to find solutions that keep children closer to home, Harry said. Aboriginal-run agencies are usually reluctant, or even opposed, to adopting children out into non-Native families. But ministry office practices vary drastically. One of her rural clients lost her child after she was ordered to take a non-existent parenting course; the loss forced her to move to the city, where another agency returned her child.

“It is going to be subjective, because what one office might do is different from another office,” Harry explained. “This is why there’s a lot of unpredictability.”

The higher levels of addiction and criminal records in Aboriginal communities are another factor preventing kids being placed with extended family. Many are deemed unsuitable regardless of the crimes committed.

Women also lose children because of abusive partners, even for single incidents of domestic violence. It not only worsens their self-esteem, but potentially deters reporting violence at all. As an advocate, Harry tries to find supports from women in order to prevent seizures. With creativity and attention, she insists, many crises can be resolved.

Even in cases without abuse or addiction, however, the criteria used to evaluate neglect is potentially skewed by cultural bias. In one case, Harry recalls, a worker deemed a mother neglectful because she didn’t know where all her children were or what they had eaten for supper. But in many Native communities, a more communal and fluid parenting style is the norm; Harry explained to the worker that kids are regularly fed by aunts, grandmothers, or friends’ parents.

Windspeaker interviewed a number of advocates involved in child welfare across Canada. All of them agreed on the importance of keeping children in their families and cultures, and that the foster care system is deeply flawed, moving kids from home to home for years, denying them permanent family, and too often leading them as adults into the justice system.

“There are far too many Aboriginal children in limbo—in foster care—across Canada,” said Laura Eggertson, president of the Ottawa-based Adoption Council of Canada. “They’re not being adopted.

“Many of these children are not being given any kind of permanency. That is a real problem. Everyone should be looking for permanency for these young people... They need a permanent family.”

For Eggertson, who is non-Aboriginal, the issue of adoption is deeply personal; she has adopted two nine-year-old Native girls. For her, maintaining their identity meant a great deal of effort: attending Aboriginal cultural events and educating them about their ancestry.

“It meant really talking with her and being open to the possibility she will encounter racism in her life and preparing her for that; probably not as well as I should have. Welcoming families into a community is a much better model than trying to pit non-Aboriginal families and Aboriginal communities against each other. I’d like to see that model across Canada.”

Adoptions are a sensitive subject, Eggertson admits, particularly because of the long history of stolen Native children. Birth families should be a priority, but not always possible.

“Of course it brings back terrible memories of the Sixties Scoop and of residential school,” she said. “But we can’t swing the pendulum the other way.

“It comes from such a place of hurt that it’s painful to talk about it, but it isn’t doing our kids any favors to not make hard decisions because they’re politically unpopular. Yes, the welfare of First Nations matters tremendously, but the welfare of individual children still needs to come first.”

For many of Harry’s clients, losing custody of their children not only brings back communal memories of residential school, but “flows directly” from that system, where many people’s only parenting example was of sexual and physical abuse.

“It just brings it all back, and triggers such negative feelings, to relive their own trauma from when they were removed,” she said. “These generations of trauma are really overwhelming for a lot of the Aboriginal families involved.

“When they think that (the same abuse) is what is happening to their child, you can imagine how depressing the family members find it.”

Some adoption models work better than others. Although many adoptive families want children with “no strings attached,” Eggertson said, an increasing number today accept birth families’ access through open adoptions.

But is there really a chasm between the welfare of First Nations and of their children?

“Children don’t neatly divide into these little parcels,” argues Blackstock. “Growing up in your culture, being proud of who you are, and knowing where you come from is in the best interests of children.

“In First Nations traditions, long before there was ever a Canada, people would traditionally adopt. You could even be adopted as an adult. It was this whole idea that children actually weren’t just isolated within nuclear families... If, for whatever reason, the child’s natural parents were unable to do that, someone else would simply step in and there would be a recognition of that person in their new role.”

When it comes to solutions, advocates across the country cite as exemplary four Alberta bands’ ground-breaking–and so far, unparalleled–Aboriginal-run agency.

The Yellowhead Tribal Services Agency (YTSA) – operated by the Enoch Cree, Sunchild, O’Chiese and Alexis Nakota Sioux First Nations – provides protective and preventative services for Aboriginal families and children, aiming “to provide permanency,” according to its Web site, and “to promote the adoption of First Nation children by First Nation families.” Based in Indigenous norms, the Agency sees its role as “a natural extension of customary care.”

Since 1987, Alberta is one of the few provinces requiring chief and councils’ consent to any adoption, in order to “preserve” children’s cultural heritage connection to their communities. But YTSA goes a step further, offering parents support programs for every age.

For Harry, increasing the number of Aboriginal foster homes and adoptive families would go a long way towards preventing children being ripped from their cultures. But on a deeper level, understanding the oppressive legacy of residential schools, the Indian Act and the Sixties Scoop is also key.

“This is the continuation of a colonialist system,” she said, “where they know better and we’re all the children.

“It really changes the way that people perceive Aboriginal families when they understand the history of hardship and traumas people have experienced. That empathy can go a long way towards doing a better job to help Aboriginal families.”