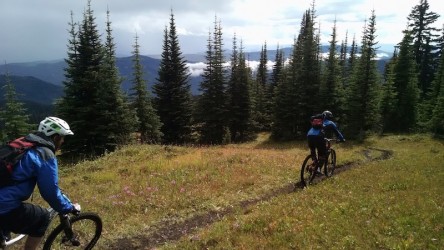 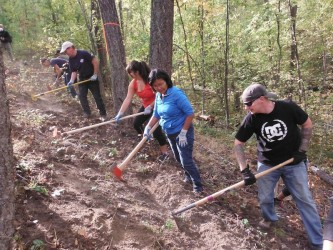 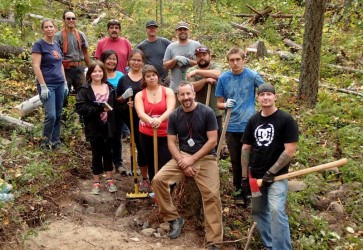 Members of a First Nation in British Columbia are hoping a short film will help its residents become more active and eventually turn its community into a tourist attraction.

The film, which is titled All Trails Are Indigenous, was released last week. The movie, just over seven minutes long, was shot this past October on the Simpcw First Nation.

Members of the Aboriginal Youth Mountain Bike Program made the film. It is about a two-day trail building workshop that was held this past October on the First Nation, located about 80 kilometres northeast of Kamloops.

Some members of the Adams Lake and Nisconlith First Nations also took part in the workshop. Also taking part were people from the communities of Valemount, Clearwater and Sun Peaks.

One of the components of this program is that members work with various First Nations to identify and develop trails in their community which can be used for mountain biking.

Tom Eustache, who has been the infrastructure manager for the Simpcw First Nation for the past 10 years, wants younger members of the community to get out and enjoy the trails.

“We’re hoping to get our youth involved and to get them away from video games,” he said.

The Simpcw First Nation currently has a trail. It’s a 5.6 kilometre looped course that is primarily used by members of an adult running club.

Though he himself is not Aboriginal, Patrick Lucas, a community planner, founded the Aboriginal Mountain Bike Program in 2012. He started the program in order to work with various First Nations youth and to encourage them to live healthier through riding.

Thanks to the workshop it hosted last fall and the release of the film, Lucas said a bit of a buzz has been created now on the Simpcw First Nation.

“This summer is going to be very exciting,” he said.

That’s because the First Nation is starting what is believed to be the first Aborignal-owned trail building company.

The First Nation is looking to start a business and hire four to five Aboriginal individuals to work as trail builders this summer. They are primarily seeking those who are in their late teens and up to their mid-20s.

“We are trying to target people who are into outdoors stuff,” said Eustache, who is also a member of the First Nation’s chief and council.
Those who will be hired will be counted on to improve existing trails in the community and to expand and make new trails.

If done properly, Lucas is confident there will be many people looking to come to the First Nation in coming years to ride trails there. He thinks the Simpcw First Nation can become a tourist destination point within five years.

“It depends on how much people will get involved with this program,” he said.

Eustache also believes his First Nation will become a place where many will want to come and visit.

“That will be because of the trails and the quality of them and the ability for anybody to ride them,” he said. “We’re trying to make them so a family can come in and ride them or even hike them.”

Lucas added though the All Trails Are Indigenous has just been released, he has already heard some positive feedback with people commenting on how they would like to visit and ride trails on the Simpcw First Nation.

Lucas is also thrilled the film, which was shot by his filmmaker brother Paul, was added to the website Pinkbike earlier this week.

“It is the largest mountain bike site in the world,” he said. “They get 1.5 million hits a month.”

All Trails Are Indigenous is actually the third taped work put out by the Aboriginal Youth Mountain Bike Program.

For starters, it released a promotional video a year-and-a-half ago. And then last year it put out another short, Finding Courage and Decolonization through Mountain Biking, which featured a 30-year-old rider discussing the numerous benefits of the sport and reasons why youth should take a greater interest in it.

Lucas is also keen to work with other First Nations and to help develop trails in their communities. When possible, he’d like to see communities working together to link up their trails.

And not just for mountain biking.

“Trails can be used for running, walking, biking and even snowshoeing in the winter,” he said.