Journey of the Nishiyuu swells to hundreds after 1,600 km trek 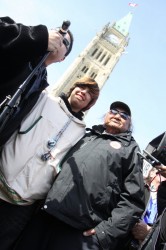 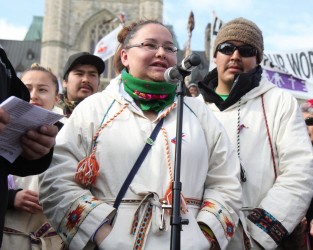 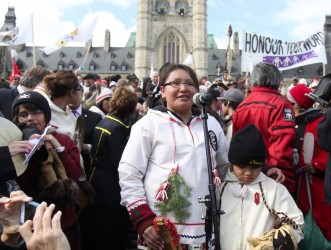 From stinging minus-55C temperatures in the far-northern Cree wilderness beyond the reach of roads, to the melting woodland snows of temperate Algonquin territory, a remarkable youth journey has made its way by foot and snowshoe this past two months, 1,600 km from James Bay in Québec to Parliament Hill.

A convoy of several hundred walkers–accompanied by van-loads of supporters–arrived on Parliament Hill on March 25. Until its final week it is a quest that, aside from Aboriginal media, has gone largely unnoticed by Canadians, but has instead gained a massive following on Facebook.

The Journey of the Nishiyuu started in mid-January as a group of seven teenagers and a guide, inspired by Chief Theresa Spence's then-hunger strike and the blossoming Idle No More movement raging across the continent. Along the route, the youth stayed in family homes and school gyms on reserves throughout Québec.
“Well, it's been pretty tough,” said 20-year-old Gordon Matthews from the Cree Nation of Wemindji on James Bay. “Since the day this journey began–from Hudsons Bay and James Bay–it's pretty much been tough. It's been minus-50 and minus-55.

“When we got down to Lac Simon–the first Algonquin territory–everything changed: the climate, the weather. We're entering a new phase. We have to face the melting snow with our snowshoes. The problem we have now is the blisters–most of us have blisters on our feet, and we're still going. We're not stopping... We're trying to protect our lands–Mother Nature, Mother Earth–because our ancestors respected our Mother Earth.”

Fellow trekker Nathalie Mathias joined the trek last week when the group–at least 100 walkers-strong at that point–reached the Anishinabe First Nation of Lac Simon. She told Windspeaker that the purpose of the walk is to celebrate and strengthen the unit of Indigenous peoples.

“I joined the walk to support the youth across all our nations, and to show that we are still walking like our ancestors did, like they used to do back then,” Mathias explained. “We want to show the government that we are fighting to protect our lands.

“This is the time to unite, for us all to get together. Even if you're not First Nations, you're part of the reason why we're fighting for Mother Earth, to protect the Earth. Because she's being polluted and she's sick, and we want our future generations to live and practice the traditional ways that we lived in the woods. Soon, they're cutting across our land, they're making money, they're building dams. A lot of those territories are being wiped out by certain mining, dams and so on.”

The Journey of the Nishiyuu has garnered a staggering 30,000+ followers on Facebook, and yet until its final week, it had only received media coverage by a Cree-language CBC radio show and Indigenous news outlets.

While walkers could only speculate on what some have called a media blackout–“I don't know why we're not being publicized. Maybe Harper's controlling it somehow,” Mathias chuckled–others emphasized that the gradual build-up of its numbers on the roads, and online, is a sign that Native people, at least, are paying close attention.

“They want to ignore it, the mainstream media especially,” said Norman Matchewan, a Band Councillor of Barriere Lake Algonquin band, who hosted the walkers' social evening when they stayed in his community. “I guess they don't want to show the unity.”

Matchewan, who has long been involved in his own community's struggle to fight the imposition of an Indian Act government, third party management, and resource corporations on its territory, described the excitement the marchers brought with their arrival in Barriere Lake, where they held a feast in their honour.

“Everybody in the community helped cook a meal,” Matchewan told Windspeaker. “It was a lot of moose, partridge, wildlife.

“Then we danced the night away after. We had music, fiddling, the Cree nation showed their style of jigging. We played some games... It's bringing a lot of communities together. There's a lot of unity showing. They're not getting much media attention, but they're getting a lot of community attention. They're not only bringing unity amongst the nations, but within our communities.”

For Matthews, the idea of a long journey is nothing new. His Cree community has a tradition of lengthy hunting expeditions and travels. In fact, when the Cree in northern Québec were fighting against hydro-electric dams in the 1980s, Chief Matthew Coon Come paddled a canoe to New York to highlight their opposition.

Today, joining with hundreds of other youth, and being joined by other nations, has brought inspiration to the original walkers and the ones joining along the route.

“I'll always remember this journey,” Matthews said. “I've been part of journeys back home; I'm one of the guides. I started my first journey when I was 11 years old, for snowshoe ceremonies... I've learned a lot walking long distances... We always go out on the land – to hunt, and learn our traditional ways. That's how our ancestors were brought up.”