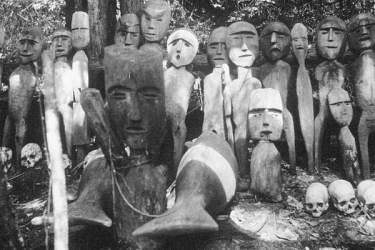 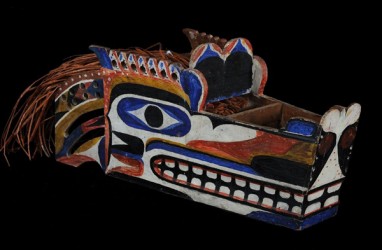 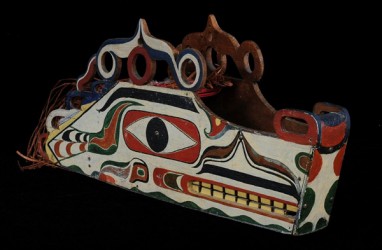 When Margaretta James stepped into the room that today houses the Yuquot Whalers’ Shrine–a centuries-old sacred collection of carved figures, human skulls and whale sculptures–she was overwhelmed by a sense of its striking spiritual power.
“For me, it was one of those hair-raising back-of-your-neck experiences,” recalled James, director of the Land of Maquinna Cultural Society. “You could just feel the power of it.

“… you experience one of those moments you can barely describe; you erupt with feelings and emotions.”

But James was also overwhelmed by a sense of loss. Today, she and others continue the decades-long fight to bring the shrine back home to Mowachaht/Muchalaht First Nation on Vancouver Island. The community is closer to victory than ever.

This year marks 100 years since representatives of the American Museum of Natural History bought the shrine from two Mowachaht who falsely claimed to be its owners for $500 (worth roughly $13,000 today). But with only the Chief Whaler allowed access to the shrine, the collectors were forced to wait until the village emptied out for whaling season to secretly ship the collection to New York. The deception was devastating.

“Some people say it was stolen,” James said. “It was taken away in such a way that it was removed from site in the dead of night, when certain community members were away.

“A lot of the things were bought and sold–even by our own people–for different reasons... they were talked into selling them. Just like with any other Aboriginal group, a lot of that stuff got bought, sold or stolen... The shrine is ours; it belongs at Yuquot.”

A century later, and after numerous requests to repatriate the collection, James is confident the Mowachaht/Muchalaht bands can properly conserve the shrine upon its return in a community centre, which has already been planned, and with a new generation of young experts, curators and interpreters recently trained in anticipation of its return. Mowachaht/Muchalaht are not the only ones struggling with issues around the protection of ancient artifacts, however.

Increasingly, tribes are demanding more federal and provincial legislation to protect sacred items from being sold in auction houses and held in museums without First Nations’ permission. But Canada, it turns out, has much less legislative protection for Aboriginal heritage than in the U.S., where the Native American Graves Protection and Repatriation Act (NAGPRA) offers wide grounds for the repatriation of sacred items.

Heritage activists want the federal government to “step up to the plate,” James said, to ensure no more culture is lost.

Another such struggle is being seen in Hupacasath Nation in B.C. where journalist Wawmeesh George Hamilton was dismayed to learn in November that his family’s hinkeets–a type of ceremonial mask–were on the block at Seahawk Auctions in Maple Ridge. Combined with other family heirlooms, the hinkeets were sold for nearly $30,000 by a relative without consulting the family, and even pleading with the auctioneer three hours before the sale deadline could not stop proceedings. (Seahawk did not respond to an interview request).

“I’m always hopeful that lines of communication can be opened, but we’re dealing with two different mindsets: people who view and treat them as the sacred items they are, that belong to a family, versus people who have $30,000 to throw around, who treat them like chattel to be auctioned and sold,” said Hamilton. “We had no recourse to getting these back, even though it was three hours before auction time.

“There was nothing that compelled the owner to stop the auction, or even before that do their cultural due diligence. There is no legislation that would have prevented this... There’s nothing under the Heritage Conservation Act that has an iron-clad mechanism that would have prevented it, or call for a 30-day lull for due diligence for older items.”

Although Canada does have a Cultural Property Export and Import Act, which ensures important heritage items are preserved in Canadian public collections and prevents illegal international trafficking of such objects, in reality the return of most items from outside Canada is entirely voluntary.

Many tribes have picked painful and costly fights with museums and collectors for objects that should never have been sold or taken in the first place, in their view. Some have seen success: in 2006, Sweden voluntarily repatriated a 135-year old pole to its Haisla creators, and at the same time commissioned contemporary carvers to create replicas.

But when it comes to private sales like the hinkeets, little can be done under the law – even B.C.’s Heritage Conservation Act or its other provincial equivalents provide little recourse on the private market.

“There’s room for different points of view, but there are some points of view that are just plain lamentable,” said David Morrison, director of Archaeology and History at the Canadian Museum of Civilization in Gatineau, Que. “I deplore the selling and auctioning of archaeological material. Once it goes into private hands, you have no idea where it came from. You might as well burn it.

“All things get reduced to mere pieces of art. Some are sublimely nice pieces of art, but they’re so much more than that. When you lose context, you lose the spiritual and intellectual value of a piece.”

But thankfully, Morrison explained, the attitudes of museums and many archaeologists has shifted substantially.
“We saw the error of our ways,” he chuckled, and more cooperative relationships with First Nations are emerging. Some bands want their items back; others ask museums to safeguard them, in some cases allowing them free access and ceremonial use.

“It’s changed entirely in the last 30 years,” Morrison explained. “Back then, museums used to think this was stuff we simply owned, like you could own a mammoth bone.

“They were relics of the past we were putting on display or researching; it had nothing to do with the descendent communities who produced this stuff. Now we see it as a matter of mutual trust between us and communities. We give them preferential access to the material, and there’s stuff we don’t do. It’s a whole different world.”

For the most part, he added, the “antagonistic” battles have ebbed, though some controversies remain; many communities continue to push for the return of sacred artifacts, whether directly or through treaty negotiations. One crux of the debate is the communal or family ownership of sacred objects, versus the individual private property recognized in Canadian law.

“The question of legal possession is crucial,” Morrison said. “I’m not a lawyer or a policeman, but the legality of some assertions of ownership is dubious.”

Of course, museums are not perfect, either. In fact, even experts in those institutions admit they have a checkered history.

“The idea of a museum has really colonial aspects,” said Bill McLennan, a curator at the University of British Columbia’s Museum of Anthropology. “The early Victorian times of collecting exotic things around the world and putting them into a cabinet of curiosities evolved into what museums became.

“Pieces on the coast were removed by missionaries, convincing people that their past history shouldn’t be saved, or if they’re going to convert they should get rid of material. It happened in burnings, or pieces were turned over to missionaries, who used them as show-and-tell to raise money for their missions in communities.”

When Indian Agents busted up West Coast potlatches when they were outlawed, many items made their way to public collections; most museums have since returned them to communities that want them back. In fact, McLennan said, the majority of museum collections will never be displayed, but are rather kept in storage and for research. A variety of ethics surround their display, he added, but what’s most important is consulting the communities who may have completely different wishes from one another.

“We had a collection of really powerful shamanic material that’s been here for years and years,” McLennan said. “We were never going to put this stuff out. It’s way too powerful.

“But the community told us, ‘It’s not your business not to put it on display,’ they said. ‘We want people to look and think about our history... The shaman is gone; put it out and connect it to our history.’ A general consensus from different First Nations communities is you don’t put that stuff out, but individual communities may have different opinions.”
When it comes to Yuquot, there are difficult choices ahead about the fate of the Whaler’s Shrine, if the community is successful in its demand for its return.

“The community needs to make those decisions,” James said. “If we bring it back to the site, what do we do with it? Bring it to the island from whence it came? Put it in an interpretive centre in storage? How are we going to share that story?

“We’ve got a lot of things all over the world. It would be really valuable to have a lot of that returned – like the shrine, as well as masks and headdresses that are family-owned... It was really sad and unfortunate that some cultural material was sold because some family members were drinking. Those were the times; you can’t fault a nation for that. Now communities and individuals are in the healing process, with issues around their residential school experience, and are really waking up to being more aware of what happened.”