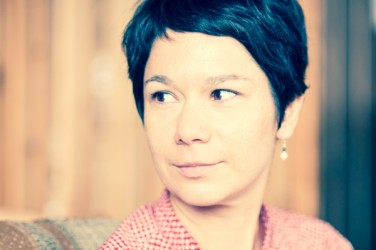 Windspeaker: What one quality do you most value in a friend?
Lisa Jackson.: Being down to earth. There is humility to that. You want to feel you can be yourself and you can with these people.

W: What is it that really makes you mad?
L.J.: Smugness

W: When are you at your happiest?
L.J.: When I’m with my family

W: What one word best describes you when you are at your worst?
L.J.: Whiney

W: What one person do you most admire and why?
L.J.: My aunt; She’s the strongest person I know. Totally honest and extremely hardworking.

W: What is the most difficult thing you’ve ever had to do?
L.J.: Move away from my parents at a young age.

W: What is your greatest accomplishment?
L.J.: Becoming a fulltime filmmaker and doing projects I’m proud of.

W: What one goal remains out of reach?
L.J.: Owning a wood burning stove

W: If you couldn’t do what you’re doing today, what would you be doing?
L.J.: Animator and/or humanitarian; volunteer work.

W: What is the best piece of advice you’ve ever received?
L.J.: This too shall pass

W: Did you take it?
L.J.: Yes. I feel like I have a much better sense of life as a longer series of moments rather than being focused on the right now.

W: How do you hope to be remembered?
L.J.: As someone who made art and tried to make a difference.

Filmmaker Lisa Jackson received the 2011 Genie Award for Best Live Action Short Drama by the Academy of Canadian Cinema and Television for her film SAVAGE. Before there was SAVAGE, there was Jackson’s first short film, SUCKERFISH. Jackson says of this film, “SUCKERFISH looks at my own history with my mother and Native identity.” It was screened at over 50 festivals and was broadcast nationally in Canada on CBC. It was also aired in Canada on APTN and the Knowledge Network.

Lisa Jackson was born and raised for the first half of her life in urban Toronto, specifically the Parkdale area. She says she found a diversity of cultures with new immigrants in the area, an interesting environment and says she ended up benefitting meeting so many different kinds of people.

The film Savage allowed her to explore a little of the life her mother led as a child, being one of the many who were in Canada’s residential school system. She says of the project, “SAVAGE is my response to the challenge. I’ve used my “obstructions” to bring a fresh take, at times even a humorous one (yes, there are zombies), on Canada’s residential school history, which–sadly–is still unknown to many Canadians. With SAVAGE I’m trying to subvert stereotypes about “Native issues” and use an unconventional approach to get underneath preconceptions and deliver an emotional experience.”

Jackson has a long list of awards and accolades concerning her work: Jackson’s 2007 award-winning documentary Reservation Soldiers, on the relationship between Aboriginal youth and the Canadian military, aired on CTV’s W5 Presents.  The short animation The Visit; Pushing the Line: Art without Reservations; an arts documentary for Bravo! Channel; and four short films on BC Aboriginal languages for Knowledge Network’s Our First Voices series. She won the 2004 ImagineNATIVE Alliance Atlantis Mentorship award and the 2005 Vancouver Arts Award for Emerging Media Artist. Jackson is one of seven innovative Indigenous filmmakers who participated in the Embargo Collective, a project launched in 2008 by imagineNATIVE Film & Media Arts Festival. The individual works produced premiered at imagineNATIVE in 2009, and were selected for screening in the 2010 Berlin International Film Festival and the 2011 Native American Film + Video Festival. SAVAGE was awarded a Yorkton Golden Sheaf for Best Multicultural Film. In 2010 it won two Leo Awards in the short drama category, given for excellence in British Columbia film and television. Jackson received the Vancouver Arts Award for Emerging Media Artist in 2005 and the imagineNATIVE Alliance Atlantis Mentorship Award in 2004.
Her current projects include the upcoming completion of HOW A PEOPLE LIVE, a one-hour documentary on the 1964 forced relocation of BC’s Gwa’sala-’Nakwaxda’xw people, the fiction feature MUSH HOLE, and a short performance-based film SNARE, the short version of which premiered at imagineNATIVE in 2012. When home, Jackson lives in Vancouver.