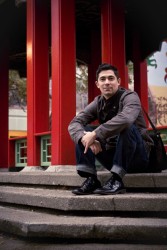 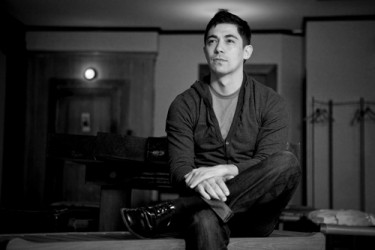 Windspeaker: What one quality do you most value in a friend?
Louis Gong: Integrity.

W: What is it that really makes you mad?
L.G.: Greed

W: When are you at your happiest?
L.G.: I’m happiest when I’m sharing my art and ideas through conversation, speaking gigs and workshops.

W: What one word best describes you when you are at your worst?
L.G.: Indecisive

W: What one person do you most admire and why?
L.G.: Bruce Lee. He was self-made, innovative and courageous.

W: What is the most difficult thing you’ve ever had to do?
L.G.: I chose to move away from home for graduate school, leaving my grandma to live by herself.

W: What is your greatest accomplishment?
L.G.: In March 2012, I will represent my family and community on a speaking tour of Germany as a guest of the U.S. Embassy.

W: What one goal remains out of reach?
L.G.: I would like to create an artist edition shoe with Vans or Converse.

W: If you couldn’t do what you’re doing today, what would you be doing?
L.G.: Quirky host of an animal adventure show.

W: What is the best piece of advice you’ve ever received?
L.G.: If you want to be successful, you must have the courage to risk failure.

W: How do you hope to be remembered?
L.G.: Eyes in the sky. Roots in the community.

Louie Gong sees himself as one who walks in multiple worlds. From a mixed heritage of Nooksack, Squamish, Chinese, French and Scottish, he was raised by his grandparents, father and step-mother in Ruskin, B.C and in the Nooksack tribal community. Gong graduated from Western Washington University’s School Counseling program in 1999 and has worked as a child and family therapist, teacher and a counseling program coordinator.
In his current role as Education Resource Coordinator for Muckleshoot Tribal College, Gong recognizes the need to deal with the realities of modern living while maintaining his cultural identity. Coming from a mixed heritage has played a key role in the direction of Gong’s life. One of the classes he has taught is “Mixed Heritage: Thinking Outside the Box about Tribal Communities.” In 2010 he gave the keynote speeches at National Indian Education Association Convention in San Diego and the National Critical Mixed Race Studies Conference in Chicago.

Gong has become a celebrity of sorts with his 8THGEN company. Most recently Gong has been making a name for himself in the art world. In 2009, ‘on a whim’, he took a Sharpie marker to a pair of Vans shoes and the result was a unique art form of expression. Gong felt that using his Coast Salish art and applying it to a pop culture icon like Vans made a statement that represented his complex cultural identity. Some related to that medium and message. Some are simply touched by the Coast Salish art. Gong is noted as saying, “I’d rather have my art available for $1.75 in a grocery store than in a gallery for thousands of dollars and available to only a certain demographic.”

In March 2012 he begins a lecture tour of Germany as a guest of the US Embassy. To learn more about Louie Gong and his art and his message, visit his Web site at www.eighthgeneration.com