Métis group joins Save the Fraser Declaration against pipeline 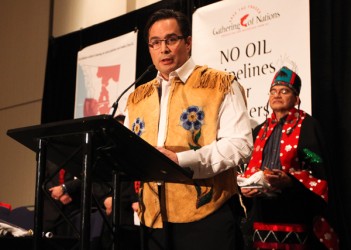 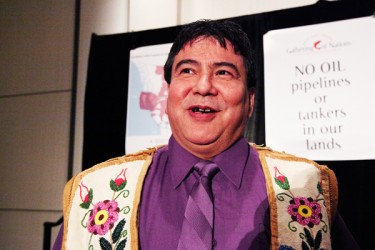 Could the battle against Enbridge’s Northern Gateway pipeline have a parallel in the NorthWest Rebellion, the 1885 uprising of Métis and First Nations which led to Canada’s infamous hanging of Louis Riel and others?

“That’s the only time that we’ve ever known the First Nations and Métis to get together,” said Lyle Campbell-Letendre, president of the Kelly Lake Métis Settlement Society, B.C.’s only historic Métis settlement. “This is huge; over 100 years later, that we’re fighting for nearly the same thing, for recognition and to save the future of our land.

“This pipeline starts right at our trapline. I’ve been fighting this thing and trying to protect our land since it started five years ago. It’s going to come through our traditional area, through some of the most pristine land in this province.”

On Dec. 13, the BC Métis Federation (BCMF), a membership-based organization, signed the Save the Fraser Declaration, a more than 130-nation coalition which vows to block pipelines from Alberta’s oil sands.

Letendre’s great -great-grandfather–Xavier Letendre dit Batoche–founded the Métis settlement of Batoche, Sask., a decade before the village became the site of the Battle of Batoche in May 1885. Then Riel and fellow Métis leader and statesman Gabriel Dumont were defeated by a Canadian army force three times larger, alongside allied Cree chiefs Pitikwahanapiwiyin (“Poundmaker”) and Mistahi-maskwa (“Big Bear”).

“I’m not sure if everyone in the media recognizes the significance of our Métis people coming together with First Nations on such an important topic,” Keith Henry, president of the BCMF, told Windspeaker. “We’ve never done that before in B.C. The relationship between First Nations and Métis in B.C. hasn’t always been constructive... We stand shoulder to shoulder and need to work together on these issues that are very important to our future.

“And it’s only happened once before: in 1885, with Louis Riel and the Battle of Batoche. A lot of people think that was a Métis story exclusively, but it wasn’t; there were a lot of First Nations leaders that sat with Métis at the time. We haven’t seen anything like this [since]. I’m not trying to stretch the metaphor here, but the fact is, this is very symbolic.”

Attending a signing ceremony with tribal chiefs from the Yinka Dene Alliance, a coalition of First Nations who have vowed to create an “unbreakable wall” against both Enbridge–whose half-a-million barrel-a-day, 1,172-kilometre proposal is currently under review–and Kinder Morgan’s soon-to-be reviewed pipeline, Henry added his organization’s name to the struggle.

“We’re with you,” Henry told the audience of the Yinka Dene Alliance, the mayors of Vancouver and Smithers, and the leadership of the Assembly of First Nations.

“And when the time comes, we’ll be with you on anything you need to do to help work together to straighten this mess out.”
Interviewed after the ceremony, Henry explained why the BCMF opposes the pipeline, citing oil spill risks, Enbridge’s history of accidents such as the 2010 Michigan rupture, and solidarity with First Nations.

“We’ve got untapped wilderness,” he told Windspeaker. “We’ve got people practicing harvesting and traditional practices on the land, and there’s a lot more here to risk.

“For what? A couple jobs and some beads and blankets? This is about not expanding a sector that’s about the most dirty energy product you could have on the planet. [We] don’t believe the way to the future for our generation is through more carbon emissions and further pipeline expansion.”

But not all Métis leadership are in agreement over the controversial project. The official, government-recognized representative of the province’s Métis–the Métis Nation British Columbia (MNBC)–signed a deal with Enbridge last year, to the chagrin of its rival, BCMF, which formed in 2011.

According to a May 26, 2012 letter from Bruce Dumont, MNBC’s president however, the alliance of 35 chartered Métis communities signed the deal to “take advantage of an equity ownership interest” in the Northern Gateway Project limited partnership. “Being on the inside working with the company on all aspects of the project, including ensuring adequate safeguards are in place for the environment and generating economic opportunities for our people is much preferred over being simply another critic on the outside and gaining absolutely nothing for Métis citizens,” he wrote. “This challenging decision represents a valuable step towards providing for the current and future needs to the MNBC and Métis citizens of British Columbia and continued strength of the Métis Nation.” But while Enbridge touts MNBC’s participation as evidence of a majority of Aboriginal support for its proposal, Henry disputes the claim and questions how representative its decision was. He said that BCMF canvassed Métis communities through surveys and online forums and found opposition to the Northern Gateway.

“These companies have come in and completely divided our community with the promise of jobs and a few dollars along the way,” he told Windspeaker.

“It’s unethical. “Industry is not only pitting Métis against Métis; it’s pitting Métis against First Nations and other groups. And until we decide there’s a bigger picture going on, it’s going to continue that way.” Enbridge has offered Aboriginals in the province incentives to support the project, touting jobs and economic benefits. “I got a deal from Enbridge on paper, but I wouldn’t even sign it,” Letendre said.

“I sent it back to them. “There was money involved, and a percentage [of profits] as part of that. It’s bribery. I sent it back to them, ‘We’ll not sign it!’ Ninety-five per cent of our diet is from moose, deer and elk, and we still live the lifestyle we did 100 years ago ... You figure out what impact it’s going to do to me!” Sundance Chief Rueben George, of Tsleil Waututh Nation, celebrated the addition of both BCMF and the Tahltan nation to the Save the Fraser Declaration.

“This is a very important moment of bringing solidarity between our nations and our people,” George told the signing ceremony. “It’s time, at this juncture, that we need to come together and send a message to the Canadian people who are numbed by some of the changes our government is making that continue to cause destruction to our lands and to our waters: It’s too much to risk. We stand together.”