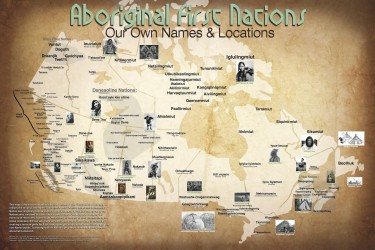 Please click on the map image or here for a full size version.

The map of Canadian First Nations pre-European contact has only been hanging on Allan Yerxa’s office wall for a few days, but already the response has been “wow.”

“I think (the map) is really important. It helps us with our self-identity. It’s important for the First Nations people to know where they come from, because they’re missing all that right now,” said Yerxa, who serves as lands and resources coordinator for Couchiching First Nation, and as such does a fair amount of historical research.

Yerxa provided mapmaker Aaron Carapella with information of First Nations in the northwest area of Ontario.

Carapella said he relied heavily on telephone conversations with people like Yerxa, along with cultural centres and tribal museums, and accessed genealogical Web sites with military and missionary reports to gather his information for his map of Canada.

“I always verified the spellings with the actual tribal source before I confirmed it to be on the map,” he said.

Originally, Carapella, who has already created a similar map of tribes in the United States, was not going to do a Canadian map. He spent 14 years, working on and off, on the U.S. tribal map and had hoped to encourage a counterpart in Canada to take on the project. But when that fell through, Carapella decided the map was too valuable to let slide.

The end result of Carapella’s Canadian research is the locations of 212 bands identified in their own Indigenous language. The map is also peppered with photos of leaders and everyday people.

“It was too difficult in some circumstances to narrow down what an autonomous group was,” said Carapella, “so I tried to group it into autonomous people.”

Logistics were also a concern, he said, pointing to British Columbia and along the coast.

“In order to make them all fit, even on a large map to make it visual … I couldn’t break it down to really small autonomous groups,” he said. “I tried to keep it uniform.”

But Carapella is still confident that a year’s worth of research into Canada’s Indigenous people has produced a “pretty comprehensive” map.

“I’m completely open to people making suggestions for me to make corrections,” he said, noting that he had “many, many” revisions for the U.S. map. “This is not my map. This is a map for the people.”

Carapella, who is Cherokee Indian from Oklahoma, became interested in a tribal map of the U.S. when his grandparents introduced him to his culture and the powwow circuit as a youngster.

“I always liked to hang things on the wall … and I wanted to pick up maps of the tribes, but there were never any really good maps,” he said. “As I got a little bit older … I came up with the idea to draw my own map. It became more concrete as time went on.”

He began the project at 19 years of age.

Now, with Canada and the United States plotted, Carapella plans to move on to Mexico and then finish up with Alaska.

“I don’t really recognize the borders between countries because I have such an intense knowledge of Native history,” he said. “My grand design … I would like to have a map at least of all of North America … leaving out provincial lines and state lines and country lines, just a map of what it looked like before contact.”

Carapella also hopes to do Canada and the U.S. in more detail, entertaining the idea of creating an old-fashioned driving atlas, where he can focus on specific areas of each country.

Carapella would like to see the maps used in classrooms at all levels of education as well as hung up in band and tribal administrative offices.

Carapella has the Canada and U.S. maps available separately as well as together, with over 750 historic First Nations plotted on the combined map.

Carapella has produced a video that can be seen on YouTube.

He also has a web page.