Meet “The People of the Kattawapiskak River” 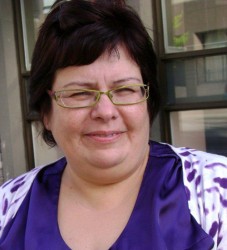 One of Canada’s poorest First Nation communities is next door to a diamond mine that is expected to produce six million carats of rough diamonds in its lifetime. The First Nation, Attawapiskat, made inter-national headlines in October 2011 when Chief Theresa Spence declared a state of emergency because of a severe housing crisis.

Several of Attawapiskat’s citizens, including elders and families with babies and toddlers, were living in tents, sheds or condemned houses without indoor plumbing, electricity or heating. Many others were living in a construction trailer donated by DeBeers Canada which operates the diamond mine located on Attiwapiskat’s traditional territory. With winter fast approaching with its  minus-40 to minus-50 degree temperatures, Chief Spence, concerned about the health and safety of her community, said she had no choice but to make the declaration.

The people of Attawapiskat are the subject of a new film by world-renowned Abenaki documentary film maker Alanis Obomsawin. The People of the Kattawapiskak River, Obomsawin’s 38th film had its world premiere at the opening of the 13th Annual ImagineNATIVE Film Festival in Toronto on Oct. 17. The film opened to a sold-out crowd at the Bloor Hot Docs Cinema.
One of Obomsawin’s greatest gifts as a filmmaker is her compassion and her love for her people. Tom Perlmutter of the National Film Board introduced her before the screening and spoke about “her ability to uncover things in a way that was different, in a way that opened up worlds, in a way that was so respectful and in a way that forced you to exist and think and feel differently… Very few people can do it in that kind of authentic way.”
The film goes behind the headlines of what became known as a “Canadian tragedy” and into the homes of the people affected by the crisis. Obomsawin’s film gives a voice to the people of Attawapiskat and, yes, it does challenge the viewer to think and feel differently.

One of the people introduced in the film is Sharon Spence, a young woman living in a construction trailer donated by DeBeers. She and her three children, ranging in age from five months to three years, live in one room. She takes Obomsawin on a tour and the camera follows as she points out the shared bathrooms and showers and finally, the common kitchen, a cavernous room devoid of any niceties or even the necessities usually found in a kitchen, like tables and chairs. The corridors are narrow and the rooms are like cells.

William Wesley is an Elder who had to move out of his house because it has mold.

“This is only a shed, not a house,” he said in the film while he builds a fire in a stove he crafted out of a barrel. He’s mourning his wife who he lost in 2010 and he talks about the good times they had hunting in the bush. He confides that now he goes into the bush to cry because he misses his wife and his late mother. His home is neatly kept and a crucifix hangs on the wall alongside pictures of his children, grandchildren and late wife.

There are others who tell their stories and like Spence and Wesley, they tell them in a matter-of-fact way, with dignity and with no bitterness or resentment. One woman, Rosie Koostachin, shares her optimism for the future for her community.

Obomsawin spoke to the audience before the screening and said, “I fell in love with the people and you will too once you see them.” After the film, Obomsawin took the stage again and she invited the people of Attawapiskat who were in the audience, some of whom were featured in the film, to join her. The audience gave them a thunderous standing ovation.

“There is poverty there, yes, but to me, the richness of the mind and the heart, it’s so big,” Obomsawin said when she spoke to Windspeaker. “I guess to describe them best would be people of good minds and good hearts.”

Chief Spence, in Toronto for the screening, talked to Windspeaker about the film and the current conditions in her community.

“It’s an incredible documentary,” she said. “I was really astonished and I could see she was there for the community, not for herself and it shows. You don’t have too many people like her.” She went on to say, “It’s a documentary meant for people to see and to learn what is going on in the reserves…”

The housing crisis is far from over, said Chief Spence. There are well over 300 people on the waiting list for safe housing. Severe overcrowding, older houses requiring renovations and houses with mold are part of the crisis. Chief Spence has set up a Housing Working Group with Mushkegowuk Tribal Council and Aboriginal Affairs and Northern Development Canada to develop a 20-year housing strategy for Attawapiskat.