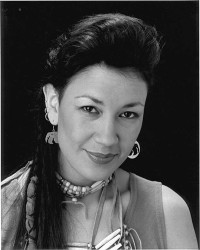 Resilient singer was passionate about healing

Juno award-winning singer, songwriter and actress Mishi Donovan searched for family all her life and, ironically, was laid to rest on Feb. 18, Family Day in Alberta.

Self-described as Chippewa Cree, with ties to the Turtle Mountain Reservation in North Dakota, Mishi was placed into foster care and never re-united with her biological parents. A likely victim of the Sixties Scoop–the decade when social workers routinely removed children from their families believing they would be better off raised in non-Aboriginal families–she struggled with her identity, finding it difficult to adjust to life on her own without knowledge of her past, culture and traditions.

“She didn’t speak much of her early life at all, and I know she was always looking for family,” said Denise Lambert. The two women met in 1985 while working at Native Counselling Services in Edmonton where Donovan acted as a court worker.

“After repeatedly being asked if we were sisters, we finally decided we might as well adopt each other,” Lambert explained.
Early in the relationship, Mishi became involved with the development of the Silver Sage Centre at Sandy Beach, west of Edmonton. She began to participate in talking circles, wellness workshops and ceremonies held there.

“She was already playing guitar and writing lyrics when I met her so I’m not sure if she taught herself or took formal music training,” said Lambert. “She definitely had the ability to make music, and everyone encouraged her to keep working at it.”

Donovan’s music described much of her life experience, including childhood abuse, violent relationships and tragedy. Leaving the foster care system when she was 15, she moved into Edmonton, eventually got married and changed her name from Michelle Harris to Mishi Donovan. Finally, in her twenties, she decided to deal with the demons that were preventing her from living a healthy, peaceful life.

With the help of elders and others, Donovan began her healing journey. When it was difficult to speak of the trauma and racism she had faced, she turned her thoughts and feelings into songs. With her music, she spoke out against spousal abuse and family violence. The songs she wrote helped her to cry and feel once again.

Close friend and adopted brother Ken Ward, who struggled with his own issues of sexual abuse and drug use–and who developed AIDS in 1989– remembered that Donovan was always inviting him out to the Silver Sage Centre at the lake, “to spend time in the trees, and to hear the latest song she had written.”

One day she played him a song she called The Chosen One.

“I listened to the lyrics and I liked the song but I didn’t have a clue it was about me,” Ward recalled. Donovan was acknowledging the courage Ward exhibited as the first Aboriginal person in Canada to go public with his HIV status, as well as his dedication to advocate for AIDS sufferers and create awareness about the disease. In the liner notes of her second CD entitled The Spirit Within, Donovan credits Ward with teaching her about the meaning of acceptance and forgiveness, and inspiring her to have the courage to write songs that revealed her own experience of domestic violence and abuse.

Donovan sang The Chosen One in The Long Walk, a National Film Board documentary about Ward’s life.

“Her songs were about empowerment. She used her music as a form of activism, urging us to see her as an Aboriginal woman. She wanted us to heal ourselves and change abusive behaviour to make this world a better place.”

Donovan’s recording career began in the spring of 1993, when Manitoba-based Sunshine Records CEO Ness Michael solicited new artists in an international talent search contest. Upon receiving Donovan’s rough home recording, Michael recognized the uniqueness of her vocals and immediately offered her a recording contract. She ventured to Winnipeg and completed her first album entitled Spirit in Flight; gaining her international recognition and multiple invitations to festivals and conferences.
In 1995 she entered the acting world, preparing for screen tests after being approached by directors and agents for film projects. She played a support role in the syndicated TV series Lonesome Dove in Calgary, and acted in Edmonton ITV programs and in live theatre projects.

When Sunshine Records released her second full-length album The Spirit Within, several singles received heavy radio rotation. She accepted a Juno Award for it on March 22, 1998 when it was named Best Music of Aboriginal Canada Recording.

Following that career coup, Donovan experienced a lower profile. A facebook message she posted in October 2012 asked for other sufferers of Dystonia to contact her. Dystonia causes sustained muscle contractions that lead to twisting of limbs and abnormal postures.

The cause of her death is not known.

Born in July 1964, she was 48 years old. She gave life to four daughters– Vanessa, Shyanne, Ember and Mekwun, and one son, Falcon.

“Mishi wasn’t as big as Buffy Sainte-Marie, but there are a lot of people who liked her music and the spiritual focus she had,” said Ward. “So many people related to her songs, about the heartbreaks in life and how we can heal from them.

“She was a strong woman, but gentle. I’m looking for funding to do a half-hour documentary on her life. I’ll bring her daughters together and it’ll be called Journey Home. I’m not sure where the funding will come from right now, but I’ll find it. If we’re talking Idle No More, Mishi was an original, passionate activist for Aboriginal recognition, in all of her musical expression.”