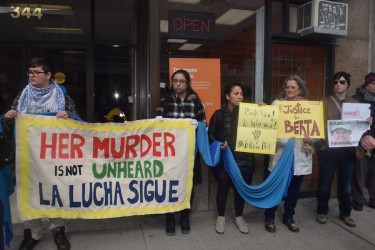 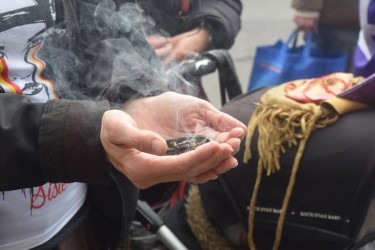 The murder of an award-winning Indigenous environmentalist in Honduras has sparked outrage across the world and has emboldened Indigenous movements, which are calling for unity.

On March 11, a coalition of civil society organizations converged on the constituency office of the Minister of International Trade, Chrystia Freeland, in Toronto Centre to demand justice for Berta Cáceres, who was shot to death in her home on March 3.

Cáceres had been one of the leading voices of Indigenous resistance to mega-development projects in Honduras and Central America for more than two decades.

Since 2006, she had led peaceful protests against the construction of a dam on a sacred river on which the Rio Blanco community depends for subsistence. Supporters and colleagues believe her successful campaign against the project proposed by a Honduran company is the reason she was killed.

“Indigenous women are on the front-line of the extraction industry, and we're bringing our children with us to protect the water and the land for future generations,” said Idle No More organizer Tori Cress, Anishinaabe, of the Beausoleil First Nation.

“It’s our stolen lands and territory that we're trying to protect.... And the same thing is happening worldwide. Indigenous women are standing up. We’re not afraid of the government, to face the police, to bring our families with us. This is a life or death situation.”

“The cowardly killing of Berta was a tragedy waiting to happen,” said Marilyn McKim, a campaigner for Colombia, Central America and Mexico at Amnesty International Canada. “For years, [Cáceres] had been the victim of harassment and threats for defending the rights of Indigenous communities and challenging powerful economic interests, most recently linked to the hydro-electric (dam) project on the (Gualcarque River).”

Similar solidarity events around the world were calling for the Honduran government to allow Gustavo Castro Soto to return home. Soto, a sociologist, is a colleague of Cáceres and founder and director of Otros Mundos/Amigos de la Tierra Mexico, part of a number of networks working on various social justice issues based out of Mexico.
He was shot with Cáceres, but survived and is now the only eye witness to the crime. Honduran authorities stopped him from leaving the country at the airport shortly after the murder and have questioned him repeatedly.

“Despite repeatedly collaborating with the investigation and giving testimony, he has not been allowed to return home to Mexico, despite his fear for his safety in Honduras,” McKim said. “We stand with Berta and Gustavo … Stop the killings and respect the rights of Indigenous peoples.'”

Demonstrators at the Toronto rally vowed to strengthen their resistance to development projects threatening Indigenous communities and Mother Earth.

Heryka Miranda, a colleague of Cáceres, first met her in the year 2000, during a meeting of grassroots organizations in Washington, D.C. She opened the Toronto rally with a powerful and emotional speech, vowing to use her “privilege as a Canadian and United States citizen to continue (Cáceres') legacy.”

“How do we assure that Berta’s children and the children of Honduras have a sustainable planet?” she asked. “Her spirit now runs through the echoes and sounds and the ripples and currents of the River Gualcarque, the river she promised to protect. The river now bears her soul. I am forever impacted by (her) beauty and light in physical form, and (her) ability to ignite the hearts and senses of the many that (she) touched.”

Canada signed a Free Trade Agreement with Honduras in 2013, despite that country’s poor human rights record. Demonstrators at the Toronto rally delivered an open letter to clerks at Freeland’s office signed by more than 80 organizations demanding that the Canadian government push for an independent investigation and that it re-evaluate its commercial ties with Honduras.

People who want to take action for Soto are encouraged to send a letter to the Honduras embassy in Canada. They can also contact The Delta Now, one of the grassroots groups at the rally, for more information on their own letter-writing campaign.

Organizations can also contact Raul Burbano, program director at Common Frontiers, to add their names to the open letter. They can do so through email at burbano@rogers.com or by telephone at 416-522-8615.