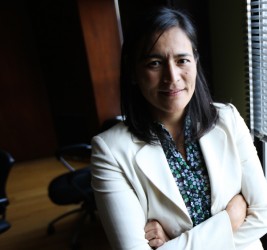 Michele Audette’s journey in the Indigenous women’s movement began right from her birth, she insists, when her mother married a non-Native man and immediately lost her status under now-repealed sections of Canada’s Indian Act.

“She was kicked out from her community,” Audette recalls. “So we had to live outside our community.”

One day, as a child, she went to request funding from the Band Office.

“‘Ha ha!’” she recalls a freckled and fair-skinned boy taunting her. “‘I’ll get funding for the school!’”

The boy’s mother chimed in with an accusation that has haunted Audette ever since, and changed the course of her life.

The mother’s accusation turned out to be true. Despite speaking her Innu language, going hunting and fishing with her family, and her brown skin, she was no longer legally an Indian. The law’s clear discrimination against Native women sparked a women’s movement that fought successfully to repeal portions of the Indian Act.

“I realized that the Indian Act was discriminating against women,” she said, describing the heady early successes of Indigenous women’s activism.

Sitting in an Ottawa boardroom as the newly-elected president of the Native Women’s Association of Canada (NWAC)–a three-year position that began Aug. 28–the 41-year-old activist says she’s equally confident in high-level government meetings as she is surviving in the bush with few amenities.

Survival skills may not be on your typical Ottawa resumé, but for Audette the strength lies in her connection to her Innu identity and culture. It’s a strength she hopes will keep her grounded as she goes head-to-head with the Canadian government in her quest for Aboriginal women’s rights.

“I’m really capable of being up north with no electricity, no running water, no technology–which is good sometimes!” she says, laughing. “And I can sit in the office of the Prime Minister and I’m not afraid, because I know who I am, and I know my culture.”

Audette replaces Jeanette Corbiere Lavell as president of NWAC, who led the organization as a respected and high-profile voice on Canada’s more than 600 missing and murdered Indigenous women.

Audette comes to her new role with a raft of experience, both as elected leader of Quebec Native Women, but also as Quebec’s former associate deputy minister for the Status of Women under former premier Jean Charest.

It’s a level of government expertise she hopes to leverage in what she describes as “a passion – not just a job”–to end violence against Indigenous women and tackle poverty in many communities.

“My heart beats, of course, to denounce the violence in our communities, and across Canada, for Aboriginal women,” she said. “That is a priority for me.

“[I’m] always passionate for Aboriginal women’s issues. I think it’s going to be until my last breath. I’ll be fighting, working and doing stuff for my family and for Aboriginal people.”

For the mother of five–three of them boys–she brings to NWAC a passion for community-based solutions that value both men and women, but also a deep respect for female leadership.

“I love to be surrounded by strong women,” she said. “It doesn’t need to be a woman who has a certificate or a university degree. It could be an Elder in the room who has more wisdom than I do; she has more knowledge.

“Being surrounded by those women–and men–are part of my actions, they’re part of the solution and we need to work together. That’s kind of my energy... I do work for women; I do fight to advance the quality of life, for equity, equality and human rights. Yes, I do all that. But in my nation, what I’ve learned: I gave birth to three beautiful men. They’re a part of my life, and I will never, never, never, never think that I have to separate what I’m doing.”

The question of Indigenous feminism is a thorny one in Aboriginal communities and amongst academics, with some dismissing it as a Western notion, and others embracing the term. Audette remembers approaching her mother one day to ask if there was an Innu word for feminism. For her, it reinforced the need for men to be part of the solution to end violence against women.
“It doesn’t exist in my own Innu language,” she said. “But that doesn’t mean that we cannot create a new word for it... But we have to create a line of respect where, when NWAC takes action, men are part of the solution. That’s why a community approach is more important than just pushing the men aside.”

Tackling poverty is also a major priority for Audette–what she describes as “systemic violence” that is directly linked to Canada’s colonization of Indigenous peoples, like violence against women.
“The links are so clear for me,” she tells Windspeaker. “With the Indian Act, we were totally, totally dispossessed of who we are, our cultural identity, and citizenship. We have no more rights; it’s just some delegated power.

And so Audette stares out through the blinds of the NWAC boardroom, which faces out over the downtown core of Canada’s capital city, only blocks from the Parliament buildings. She faces hurdles ahead with the federal government recently announcing a minimum 10 per cent cut to dozens of Aboriginal organizations’ budgets, including NWACs, and a government and public with little appetite to acknowledge the depths of the injustices experienced by Indigenous women.

In the midst of this struggle, however, Audette is optimistic. Asked what she’d say to Prime Minister Stephen Harper if he were in the room, she replies without hesitation.

“Well, Stephen Harper,” she laughs, “you’ll hear a lot about me! I won’t remain silent!

“When I wake up every morning, I say ‘Thank you’ to the Creator, and I’m open to advance another step, with other people doing the same.”