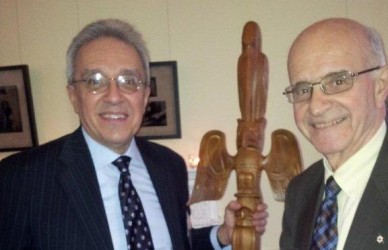 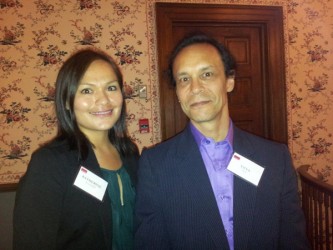 On May 1, at Toronto’s historic Campbell House at Queen and University, Sossin announced they have commissioned world-renowned B.C. artist Ya’Ya Heit to create an art work for Osgoode’s new building at York University.

The announcement was made at a reception co-hosted by Osgoode and Justice Harry LaForme and his wife Janice, who brought together supporters such as retired Supreme Court Justice Frank Iacobucci, Ontario Chief Justice Warren Winkler, Chief Bryan LaForme and Cree lawyer Katherine Koostachin of Willms Shier and board member of the Indigenous Bar Association.

In his welcoming remarks, LaForme, a member of New Credit Ojibway First Nation, said the project brings together “two very special things in my life.” One is Osgoode, he said, and its vision of law that is inclusive and diverse, and its desire to make a meaningful connection with the Aboriginal community. The other, he said, is Ya’Ya Heit, “one of my favorite people in the world…one of the most special artists the Aboriginal community has produced.”

This won’t be the first time Gitxsan artist Heit has worked in Toronto. In 1979, he completed Hawk Pole, one of three totem poles in the Spadina subway station that are reminders of an Aboriginal presence in the city.

At 180 Queen Street West, the federal court building houses a square totem pole completed by Heit in 2006. It features wigged judges together with a heron and an eagle, which are Aboriginal symbols of justice, a beaver as a symbol of Canada and a child as symbolic of future generations.

“Toronto has turned out to be my favorite place of business,” said Heit, “…and people here just really amaze me with their appreciation.”

He has an idea about what he’ll create for the Osgoode project. Along with viewing the space that will house his work, it’s essential for him to research the history of the area and its people, all the way from the original tribal peoples to the newcomers.

“Everybody’s history is always interesting,” he said, “and I’m very fortunate that I can bring that out through my art.”

Heit doesn’t see a disconnect between his art and the law. He’s proven he can easily and beautifully incorporate Aboriginal culture and tradition with law in what he creates.

“We all have similar feelings and we’re all human beings,” he said, “and we all appreciate a bit of law and order.”

A talking stick was created by Heit for Justice Laforme who had it in hand when he was discussing the Osgoode project.

“This is not just a talking stick or a piece of art,” said LaForme. “This is my life. Everything that’s been put into this has something to do with me or my community.”

LaForme keeps it in his chambers and “It inspires me every day,” he said. “It keeps me grounded. It keeps me knowing who I am and where I come from. It keeps me feeling very special about who I am.”  LaForme said he hoped the Osgoode project would serve as a similar source of inspiration, teaching and pride.

Dean Sossin said Osgoode is committed to engaging with, and supporting, Indigenous communities, and bringing art into legal education and disseminating ideas through art.

“Idle No More is a reminder how art can weave into the search for rights,” he said, “and it makes perfect sense to express legal ideas in ways other than just words on a page.” Art and law can enrich each other, he said.
In 1993, Osgoode established an Intensive Program in Aboriginal Lands, Resources and Governments. The program is open to third-year law students who are in their last term of law school. The program’s focus on experiential learning requires students do a two-month placement, in organizations which have included the Assembly of First Nations and Chiefs of Ontario as well as friendship centres and First Nations communities.

A student returning from a placement at the Native Women’s Association of Canada (NWAC) engaged the other students in the Faceless Doll project. Faceless Doll was developed by NWAC in tribute to missing and murdered Aboriginal women. The faceless dolls created by the law students will be on permanent display at Osgoode.

Osgoode has stepped up its efforts to recruit Aboriginal students. In 2013, they had 38 Aboriginal applications, an increase of 90 per cent since 2011.