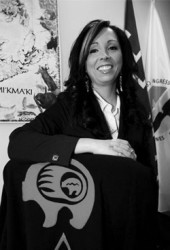 “I’m talking about our sovereignty as Indigenous nations,” Pam Palmater declares enthusiastically, her voice edged with a passion for which the Mi’kmaq lawyer and academic has become renowned.

On May 28, the chair of Ryerson University’s Centre for Indigenous Governance joined the quest for leadership of the Assembly of First Nations. Immediately, the member of New Brunswick’s Eel Bar First Nation was dubbed a “wild card” in the race.

Sovereignty is “fundamental to everything that we are as Indigenous people,” said Palmater.

In her view, the AFN is failing as a First Nations advocate and she wants to take the organization back to its advocacy roots, exemplified in its charter, “To protect our succeeding generations from colonialism; to reaffirm our faith in fundamental human rights.”

Resisting colonialism must be front-and-centre in the AFN’s work, Palmater argues, alongside urgent attention to crises in housing, health, and violence. But recent federal budget legislation – not to mention the omnibus
Bill C-38, with its prisoner increases and a raft of Aboriginal-specific laws – deserves a radical response.
“If we do not offer resistance to this legislative sweep that’s coming down against us, that’s ongoing colonization. AFN has to make a choice: if it’s too scared to say anything

because it’s worried about losing its funding, then it can’t be an advocacy organization any more,” she said.

“It’s coming so fast and furious – how do we deal with it all? But it’s more devastating if the AFN – our national organization – isn’t resisting. If they can’t do it, what do they expect to happen?”

This type of fiery challenge is precisely what makes Palmater a wild card. For those seeking to shake up the
First Nations-Crown relationship, the 42-year old lawyer is a breath of fresh air. For others – including those who criticize her lack of leadership experience and the fact she only got her Indian status a year ago – calling out perceived complacency amongst First Nations leaders may be a recipe for disaster.

“It’s one thing to have a positive relationship with Canada,” she said. “That’s important – they’re our treaty partner. But we can’t put all of our eggs in one basket. That can’t be all that we do – just focus on how much we can give up to make Canada happy. At some point in time we also have to stand up for our people.”

Palmater is critical of the Crown-First Nations gathering in January.

“It was all about the pomp and circumstance, the shaking of hands and photos. What came out of it?” she asked.

“Nothing has changed in the First Nations-Canada relationship except the AFN signed on to a joint action plan that was drafted by the Conservative government which is about integration of First Nations people into society. It was not about recognizing our distinctiveness. It’s about benefiting and giving entitlements to individuals versus dealing with the chronic poverty as a collective in First Nations – and maintaining paternalistic control.”

Palmater’s campaign has been endorsed by grassroots and chiefs alike.

“Pam Palmater is speaking a language that we should all be speaking – a language of sovereignty and true nation-building,” said Morris Swan Shannacappo, twice-elected Grand Chief of Manitoba’s Southern Chiefs Organization and former Chief of Rolling River First Nation. “(She’s) a good, strong, vocal leader that is also a very good listener and observer.”

Palmater was called to the bar in 1998, and earned a doctorate three years ago for her thesis, “Beyond Blood: Rethinking Aboriginal Identity and Belonging.”

But it’s the struggles of Indigenous communities across the country that most troubles her. With crises increasingly making headlines – from housing shortages in Ontario’s Attawapiskat First Nation, to communities displaced by flooding in Manitoba, extreme suicide rates on reserves and missing and murdered women – Palmater wants a more urgent response from AFN.

“If the AFN can’t acknowledge that, and work with First Nations to come up with an emergency action plan to deal with this crisis,” she warned, “then it’s all semantics when we talk about the Seventh Generation, because if we can’t take care of this one, we won’t have to worry about the seventh generation.”

She may be fiercely critical of the status quo, but Palmater is known as both approachable and understanding.

“What’s exciting most people is the thought of re-unifying First Nations across the country in a way that respects everyone’s diversity, sovereignty and rights,” she said. “Our right to govern ourselves. Our right to have our laws recognized and respected. Our own governments, our own trade networks, our own alliances and treaties, management of land and resources – citizenship even. How we choose our own governments.”

Fighting words, yes. But for those looking for change, words of hope.