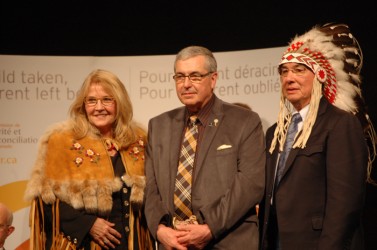 The Alberta and Yukon governments are the latest to commit to curriculum development to get the history of Indian residential schools taught in the classroom. But for the real story to be told, instruction has to go deeper and be consistent, say proponents of Aboriginal learning.

“I don’t think it’s enough for us just to say, ‘Listen, we had residential schools, it’s terrible and we apologize and now Canada’s a better place,’” said Wab Kinew, director of Aboriginal inclusion at the University of Winnipeg.

Kinew spoke in response to a question that dealt with the role of the Truth and Reconciliation Commission’s National Research Centre. Would it advocate for a change in school curriculum? Kinew was part of a panel discussion on the NRC during the seventh and final national event for the TRC held in Edmonton at the end of March.

As part of expressions of reconciliation, Alberta and the Yukon said curriculum would include Indian residential schools in classes kindergarten through Grade 12.

In a letter, Premier Darrell Pasloski said Yukon was working with First Nations to develop curriculum that would include “the residential school experience and the significant impacts.”

Premier Dave Hancock and Aboriginal Relations Minister Frank Oberle personally delivered the Alberta government’s commitment, which went a step further. Not only would residential schools be included in the curriculum – Alberta operated the most residential schools in the country at 25 – but that the “curriculum must include the diverse perspectives of First Nations, Métis and Inuit peoples living in Alberta in relation to historical and contemporary contexts.”

The need for such curriculum development, particularly in Alberta, was underscored by comments made by Wetaskiwin Mayor Bill Elliot, who was inducted as an honourary witness in Edmonton.

Wetaskiwin is located less than a 20-minute drive from Maskwacis, which is the central community for four Cree First Nations.

In a partial list provided by the TRC, and in addition to Alberta and the Yukon, Manitoba, Newfoundland, New Brunswick, Nova Scotia, Saskatchewan and the Northwest Territories have each committed to teaching about residential schools in the classroom.

“(This) is the latest information that we have gathered about where the provinces and territories are in terms of mandatory curriculum. We know it’s not up-to-date, but haven’t the resources right now to update it,” wrote Heather Frayne, senior communications advisor with the TRC.

Wesley-Esquimaux noted that many teachers she has spoken to do not feel comfortable teaching about residential schools.  She suggested that teachers heading to the northern parts of the country, where the Aboriginal population is the heaviest, should be given training to prepare them to go into the isolated communities.

“So one of the things we push for is that teachers colleges have more than one hour on First Nations peoples, that they have an actual course that is well-thought of, well-informed,” she said.

Kinew applauds the work to be undertaken by the provinces and territories, but adds that the educational demographics have to be wider.

“We’re doing good things, but in as much as we need to focus on educating people through kindergarten to Grade 12 and at the university level, we can’t forget to educate the adults of this country as well because that’s where most of the work needs to be done,” he said.