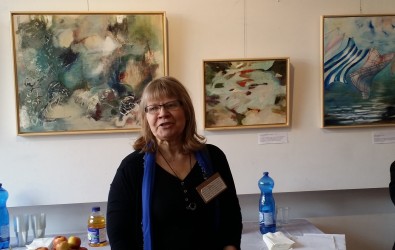 Artist Dianne Patychuk took up the challenge of her own reconciliation project shortly after the release of the Truth and Reconciliation report last year.

In the last six months, she’s had two art shows entitled “We Are All Treaty People” at the Ben Navaee Gallery in Toronto’s Leslieville community.

Patychuk, a non-Indigenous artist, donates all the money from the sale of her paintings, with the exception of the gallery’s commission, to projects in two Ontario First Nations communities. She doesn’t deduct her expenses for materials and supplies because “I consider that as tuition for all that I’m learning,” Patychuk said. A total of 35 paintings have been sold from both shows.

Patychuk grew up in the prairies. “I was born on the edge of an Indian reserve,” she said at her second exhibition last month.

When the TRC report was released with its calls to action, Patychuck decided to study intensively for a year and “try to learn as much as I could about things I had not paid attention to, to learn about colonialism and the treaties that we’ve broken and the racism that’s embedded in how the government and the government bureaucracy deals with Indigenous people.”

“I wanted to examine my complicity in the on-going project of colonization,” summarizes Patychuk in her artist statement. Her paintings are inspired by what she’s learning, she said.

“The TRC exposes the wrongs that Canada has done and is still doing to Indigenous peoples, from cultural genocide to fraud and coercion, from the abuses in residential schools to seizing land, underfunding and breaking treaties. We are all implicated in these injustices…what the governments we elect do is one way that we are implicated in the growing gap between settler groups and Indigenous peoples and the many injustices and denial of rights.”

In her paintings, Patychuck tackles colonialism’s consequences—poisoned waters, missing and murdered Indigenous women, child and youth suicide, the rape of the land.

“But I want the work to be about settler descendent obligations,” she said, “not about Indigenous people’s victimhood/suffering.”

The two Ontario First Nations benefitting from the sale of Patychuk’s paintings are Pikangikum and Neskantaga. Both communities have declared a state of emergency because of youth suicides. Neskantaga is located 500 kms north of Thunder Bay and Pikangikum is 100 kms north of Red Lake. The projects supported in both communities have children and youth as their focus, including a playground upgrade for Neskantaga.

Patychuck’s painting of laundry fluttering gently in the wind is a reminder of the universal need for clean water for cleanliness, for drinking.

“There’s a water theme in a lot of my work,” she said, “because it makes sense that people have access to drinkable water. And Neskantaga First Nation, of course, has had a boil water advisory for 23 years, the longest one.”  Habitable reserves with access to clean water is just one of many commitments that hasn’t been kept, said Patychuk.

Learning about the Indigenous concept of land has been illuminating, she said. Unlike the British, Indigenous people didn’t consider land a commodity. “It was for everyone,” she said, “to be nurtured and supported because we all need it to survive.”

Patychuk bought her house in Toronto when it was still stolen land, she said. “The Mississaugas of New Credit settled in 2010 and I bought my house in 1989,” said Patychuk. “And my parents came to Canada as refugees,” she said, “and they were given land.” Implicit in her statement is that the land given to her family was land that was stolen from Indigenous people.

She has found the research into the colonial project overwhelming.

“It has been transformative,” she said. “I’m not quite sure where I’m going to end up because I found it so painful and so difficult and sometimes I can’t paint because I’m so upset, so angry.”

She’s done a lot of research and, “I can see the same things come up, that whole story of coercion and lying and getting away with whatever you can get away with,” Patychuck said. “And the racism. I’ve found the same thing in every treaty I’ve investigated.”