Red dresses: There, but just not there 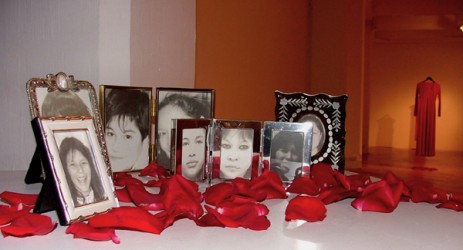 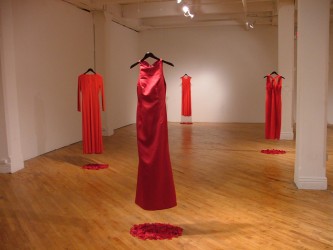 There is no turning a blind eye to the fact that young Indigenous woman in Canada are five times more likely to have their life ended by violent death.

Métis artist Jaime Black has created a project that may just elevate the awareness of that fact and bring some comfort to the families of the missing Aboriginal women throughout Indian Country.

Red Dresses, simply put, can make a huge statement. The red dress is often worn to turn heads and make a woman feel like she’s on top of the world, and Black’s artistic use of them should really turn a lot of heads.
“I was at a conference in Germany and a woman from the First Nations University got up at this Canadian Studies conference and started talking about the missing and murdered women in Canada and that was a really powerful moment for me…I imagined all these dresses in the trees.”

Black is in the process of collecting 500 red dresses. Her goal is to exhibit them in and around the city of Winnipeg to illuminate the issue of the murdered and missing
Red, she explained, is the representation of the woman of the red nation, and life blood; the woman’s ability to give life.

“It is also a symbol of de-racialized and sexualized violence against Aboriginal woman.”

As an artist who seems to be defined by her interest in projects of activitism, with previous smaller scale political drawings made for magazines like Horizon, Black feels that art has something to lend to politics.

“The thing about activism is you hope that there will be an impact, but to measure that impact is not really easy. But hopefully by educating the general public there will be more support and more importance placed on the issue.”

Black said the media has played its part in creating a negative response to the sensitive issue, and she hopes that through an art exhibit such as this one she can turn this response around.
“I think what happens often is the media misrepresent missing women and I hope this project will help inform people about, you know, the humanity of these women and the fact that they are very important and very good people and have made mistakes…but they are valuable people.”

Black also hopes the project will allow people to see that there is support for the issue.

“I just think it’s good to see it in a bigger scope, to see that people are interested and helping out..a lot of people do want to support the issue. It’s just that they don’t know enough about it yet.”

Black believes that education will be a way to take a stand against such government inaction on the files of the murdered and missing. And although there is no direct link from the REDress Project to the justice system, her art exhibit can work to further encourage the education of all people.
“I think if the community works together then we can start to educate the justice system and the police and all kinds of people. I think that education is the key to help people understand and have more sensitivity around the issue and maybe in that way it will change something.”

The idea of the hanging red dresses is not the only important statement in the project. The process to collect these dresses is just as important, said Black.

“The whole idea of the project is the process towards the installation, not just the installation itself. I hope that during the process of unpacking I’m allowing people to critically think about the issue...it’s amazing how…powerful it is to see these dresses just hanging there, and when you walk by them it feels like you are walking by someone but no one is in them. It really works as a kind of visceral reminder of these women.”

Black would also like to create a documentary that would not showcase her and give Aboriginal women a public face.