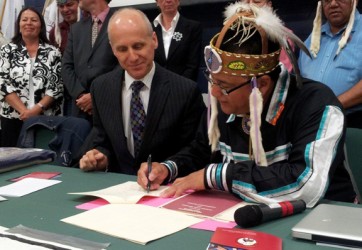 Not only is the incidence of cancer on the rise among Ontario’s First Nations population, but the cancer survival rate is worse than for other Ontarians.

In recognition of these unique and pressing healthcare needs, a Relationship Protocol was signed on June 5 between Cancer Care Ontario (CCO) and the Anishinabek Nation.

The agreement was signed at the Anishinabek Nation’s Annual Assembly held at Munsee-Delaware First Nation near London, Ont.

Grand Council Chief Patrick Madahbee said the agreement is a commitment to work with CCO in partnership, “to raise the awareness of our people about the importance of early detection and to get screened for prostate and breast cancer and to get colonoscopies. All these things are so crucial,” said Madahbee, “because we are inundated. There is no First Nation that is immune from the tragedies and losses of people to cancer.”

“For us at Cancer Care Ontario,” said Michael Sherar, president and CEO, “this is a real milestone in our partnership with First Nations to make sure that the strategies we develop to reduce the burden of cancer recognizes the distinct and unique needs of our First Nations. We recognize the need to do that in true partnership and today represents a commitment to that partnership. The agreement is really about how we’re going to work together.”

Before 1991, Ontario First Nations had lower rates of cancer and deaths from cancer than the general Ontario population.
However, since 1991, the First Nations advantage has been decreasing and the incidence rates for colorectal, lung, breast and prostate cancers have been on the rise. First Nations people in Ontario have also been shown to have poorer survival rates for these types of cancers than Ontarians from the general population.

“The differences are getting worse,” said Sherar and cites a number of factors. Access to screening and treatment services is often a challenge because of the remoteness of communities. In addition, there are barriers related to language and culture. The level of awareness in Aboriginal communities, he continued, needs to be raised about risk factors for cancer.

“Smoking, unhealthy eating, [lack of] physical activity and alcohol consumption are all risk factors that we know lead to increasing incidence of cancer.”

Madahbee agrees that First Nations’ lifestyles need to change, but sees other risk factors at play.

“It’s a critical situation in our communities right now,” said Madahbee. “A lot of it has to do with our diet, but there’s things like pollution, hydro lines passing too close to houses in our communities, toxins in the soil and the things we eat, animals that have been exposed to stuff that’s been used to control weeds.”

Working in partnership will make a difference with cancer survival rates, said Madahbee. Raising awareness amongst the leadership, front-line workers and all community members about the need for screening, “can save a lot of folks through early detection,” he said.

“What we’ve been seeing as we go around our communities is that there isn’t any family that hasn’t been touched by cancer through the loss of someone in their family or extended family or friends or neighbors. You can see it’s happening to younger and younger people, then right up to the elderly. This shouldn’t be happening.”

Cancer Care Ontario is committed to listening to First Nations communities, said Sherar and “making sure that the solutions we work on together for reducing the burden of cancer – screening, timely diagnosis, treatment, survivorship and palliative care – meet the needs of the Aboriginal peoples very specifically.

“We need to do better in making sure that the barriers for Aboriginal people to access screening services are dealt with in an effective way so that they do access those services.”

Over the coming months, Cancer Care Ontario, an Ontario government agency, will be signing Relationship Protocols with other First Nations, Inuit and Métis groups.