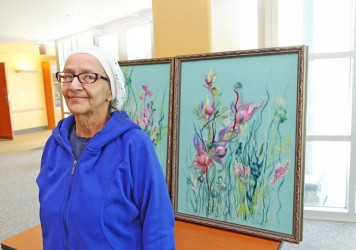 Theresa Morrisseau hadn’t really thought much about cancer in the first 59 years of her life.

Growing up in Rocky Bay in an Ojibwe speaking home, health resources and education were scarce. If she was sick, she’d go see a doctor in nearby Beardmore on the one day a week the doctor came there, but in between episodes she didn’t pay it much mind.

“I’m a very stubborn person,” the now 60-year-old mother of three and grandmother of nine, an Elder of Rocky Bay First Nation, says matter of factly. “I don’t go to the doctor because I have a sore leg. There’s got to be something seriously wrong with me; the leg is falling off before I go see a doctor. I don’t want to waste anybody’s time.”

But she has a daughter-in-law who might be just as stubborn. Kyla Morrisseau is involved with the Anishinaabek Cervical Cancer Screening Study (ACCSS) as a research assistant in her own community and bugged her mother in law to join in until she finally relented.

What she learned through that about the incidence of cervical cancer among Indigenous women and the importance of screening was a revelation.

So when a lump formed on her chest, she went and checked it out. It was a serious case of myeloblastoma which has since been treated and is in remission.

She’s not sure she would be alive today if she hadn’t acted
when she did. She has friends who didn’t act in time. They were not so lucky.

So Morrisseau has become a big booster of women in the
Indigenous community, and women in general, getting information and educating themselves about the possibilities of getting cancer and the actions they can take to prevent it or detect it early enough.

And that interest stems largely from a joint project led by the Thunder Bay Regional Research Institute (TBRRI) and Lakehead University to incorporate art into a research study on cervical cancer screening.

Dr. Ingeborg Zehbe is a researcher at the TBRRI leading the
ACCSS. She knew that Indigenous women had higher cervical cancer incidence, most likely due to the lower screening and follow-up rates, and the study is designed to address that. In thinking about how to get the message of the importance of screening across effectively, she ended up consulting Dr. Pauline Sameshima, the Canada Research Chair in Arts Integrated Studies at Lakehead University.

Dr. Zehbe had integrated art into the ACCSS already to design the study pamphlet with the community women and a local artist from Gull Bay designing the study symbol—a turtle.

The problem they faced is the reality Morrisseau lived for
most of her life. First Nations women are less likely to seek out medical care until it’s absolutely necessary. And they have less access to education on health issues.

Growing up, Ms. Morrisseau didn’t have easy access to health resources or information. There was no doctor or public nurse in the community. The subject didn’t get talked about in the home. In the numerous more remote communities in Northwestern Ontario the situation was probably even worse.

“There was nobody to say I’m working on health issues,” she recalls. “No one to say what the consequences of not getting these tests done are. No one to give the relevant information.”

Going off reserve to get even limited access to health wasn’t particularly appealing either. Residents had had enough bad experiences that they avoided interactions with anything that smacked of the non-Aboriginal world. So it would have to be a fairly serious situation to go.

“We saw the government as the bad guy,” she says. “So you kind of stayed away from the whole deal . . . we would go if we had to, but otherwise no.”

Addressing these structural barriers – factors like remote geography, transportation issues and lack of adequate health resources on reserves – as well as cultural barriers stemming from the legacy of colonialism following contact with Europeans that face First Nations women like Ms. Morrisseau even today, is the goal of the ACCSS.

Despite these options, according to the ACCSS web site,
First Nations women endure notably higher rates of diagnosis and mortality due to cervical cancer.

So the ACCSS project, a research study based in Thunder Bay and involving 10 First Nations communities in Northwestern Ontario is premised on the safe assumption that if cervical cancer screening and follow-up of abnormal results is better organized in First Nations communities, the incidence of cervical cancer will go down. But Dr. Zehbe realized after conducting some pre-study focus groups that a traditional approach to education wasn’t going to work. So the goal became to find innovative educational tools to promote the screening that would see greater participation.

That led Dr. Zehbe to approach Dr. Pam Wakewich, a co-investigator on the study and Director of the Centre for Rural and Northern Health Research at Lakehead University. She recommended Dr. Zehbe approach Dr. Sameshima about integrating art into the education part of the project.

Dr. Sameshima came up with wool felting of styrofoam balls, the balls representing  HPV —work that would be done during the education sessions in an attempt to increase dialogue and communication.

This was tried as a pilot in one of the 10 partner communities and the aim was for the participants to metaphorically take charge of their own well-being by creating their own design through felting the HPV balls, she said.

What ensued was almost magical. At the outset, there are two sides – researchers on one side, community participants listening to them on the other. Then the balls come out, the felting begins, even as a power point plays informing the participants about cervical cancer and screening, and everyone comes together in the circle as they work with questions and discussion flowing between the researchers and community members.  The line between the researchers and community members disappears as each works on their ball, chatting as they do.

“The difference in the amount of back and forth dialogue between the time people were felting and the time we didn’t use felting, was phenomenal,” said Dr. Sameshima. “At the end of the felting, when all the balls were out, there was a real sense of community. We probably all have the virus in us, it’s dangerous for some, not dangerous for others, but as a group we can all care for one another.”

The study can say it has saved at least one life. Armed with
the information she received at the felting session, Ms. Morrisseau sought medical attention when she had a persistent sore rib. It was attributed to a recent fall she had, was likely broken and only time would heal it. That sounded reasonable, so she went home, determined to live through the pain in the meantime.

But after two weeks without the pain subsiding, she realized something had to be wrong. In the past, said her daughter-in-law Kyla, she would have just continued to suffer. But with the awareness the cancer information had created, she returned to get checked out again. Testing discovered she had cancer and it was causing her bones to break.

Her treatment was successful and now she says she’s fit
enough to take on her interviewer in a race. But she knows what fate awaited her if she hadn’t been on top of her own health and eager to get tested.

In the aftermath of the felting session, some of the other
women participating who had not previously been screened went and got screened. And a roomful of women are now ambassadors for screening, talking about their experience with their friends and neighbours.

Ms. Morrisseau said she visited her grandson in a supported
living home where he stays and was showing him her HPV ball and telling him about the experience. All the women working at the home who listened to the story subsequently went and got screened.

That cascading effect in the wake of the workshop is an
important part of the project, says Dr. Zehbe.

“The evolution is just beginning,” said Ms. Morrisseau. “This is just a start.”

For more information on the Anishinaabek Cervical Cancer Screening Study visit its web site at accssfn.com